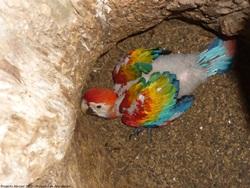 We really had a lot of rain this month and for me seeing the change from the dry to the wet season for the first time is honestly amazing. Everything grew back to a fresh, thick green in just a few weeks. It really seems like the dry ground just waited for a few heavy downpours so everything could begin a new life again! And suddenly we find ourselves fighting for the trails not to disappear again by clearing the trails and around the camp regularly so we can offer nice, clean and, the most important of all; recognizable trails for the tourists and can use them ourselves for transport and work.

Two weeks ago we also mowed the football field for the first time this year with our new mowing machine, it took us two days because the grass was already so high and thick! Since then so much has grown back that we will probably have to do it again in a few days. But all the effort is worth it when we can watch the young people from surrounding villages play football or even join them in a game which is always a lot of fun!

At the start of this month we checked our two macaw nests again. Unfortunately we found one of them empty which is very sad because we have invested weeks of work and time in it. Our biologists think it might have been a young bird-couple that was just "practicing" the whole mating and nesting procedure but were at the end too inexperienced to really reproduce. But still we see it in a positive way because by watching the birds for such a long time we have gained a lot of knowledge about these beautiful birds which will still be useful for us in the future. We have also been able to show these interesting animals to a lot of volunteers and give them an idea about the importance of our work there. We know that macaws use the same nests for years so the same couple might be successful there in the next breeding season.

I am more than happy to tell you though that we have found a healthy, and now, really big macaw-chick in the other nest! By this time it is probably about 2 months old and it already has its' first feathers and we expect it to leave the nest in another month and go for its' first flight together with its parents. Of course it is very interesting to watch the baby grow and develop but to see "our" macaw-chick we have to climb up the high nest-tree (for which we have the very experienced Oscar Rosales). We won't do this more often than once a month but we will keep you up to date with the newest pictures of the chick and also on the Facebook page (Scarlet Macaw) about the project where we always give the newest information about the birds! 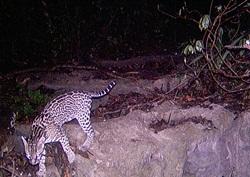 We are currently also very active working in our nursery garden close to the camp. We have a long term project there where we collected and planted seeds of the ojoche tree but from different areas in the park. Now, sometime after we can see that the seeds of one are far more fertile then the other ones which didn't grow the same amount or speed than the others. These differences can be explained by lots of different things like for example for the fertility of the soil in the areas where we collected the seeds or the effect of the weather on the growing conditions of the plants. We will do that every few years so we can see how the trees' fertility changes over the years and by mixing the seeds from different areas and later planting the young trees in different areas of the park we can enlarge the gene-pool and so increase the exchange of genetic information between individuals within this species.

We also got to plant some of the local trees that are typical for the Costa Rican dry-forest but are found rarely in nature nowadays such as Ronron (Astronium graveleoles) or Ceiba pentandra. We got about 400 young trees like that from the Costa Rican Electric and Telephone Company "ICE" as a donation and planted them around the camp, the camp site and in the forest. This helps to regenerate the forest and restore the area faster.

This month we did a test of our sensor camera equipment for an upcoming project that we should be starting in the next few weeks. A student from the local city, Nicoya, will be joining us a couple of times a week to do a feline sensor camera project. We have noticed that around the main camp there is a much higher chance of seeing ocelots but until now we haven't managed to identify how many or what their ranges are. Hopefully with the work of this project we will begin to get an idea of what is going on with this incredibly shy nocturnal species! During this test however we actually got some amazing pictures in just the test run! Must be a good site to visit again!

At the end there is still time left to tell you about the monkey project we started at the beginning of last month. It turned out to be so popular with the volunteers that we decided to continue doing it with great success! In that short time we managed to find out a lot about the monkeys and have statistics and a lot of gathered information. Still the volunteers show great motivation to walk out into the forest looking for monkeys and run this project with only minimal supervision from the staff.