What a great month in the Amazon as the rains finally eased off and allowed us to tackle many projects simultaneously. With all beds full and volunteers eager to do their part we have managed to progress in our biodiversity research with many new discoveries for the reserve, we have started the new spider monkey cage, the mammal census has continued with some great sightings, the pilot farm saw us clearing reforestation transects and so much more. The comforting dilemma is where to start and this month I will begin with the field of herpetology.

The first week of March saw us receive a visit from an American PhD student Tiffany Kosch and her assistant. Having contacted us earlier in the year the team of biologists were interested in coming to Taricaya in search of Chytridiomycosis, a condition that has been wiping out huge communities of frogs and toads all over the world. This deadly disease is caused by a fungal pathogen Batrachochytrium dendrobatidis (Bd) which has been implicated as the worst ever infectious disease recorded in vertebrates and is thought to be responsible for over 200 species becoming extinct in recent years. The condition, chytridiomycosis, interferes with amphibian respiration through the cutaneous layer (skin) and the result is mass mortality and resultant losses of biodiversity. The steady advance of the Bd fungus through Central America has been well documented but less is known about its potential presence and resulting effects in South America. Tiffany and her team are out to discover more about the disease in Peru. Whilst we were all confident that chytridiomycosis had yet to reach Taricaya (we had not seen the characteristic trails of dead frogs around the reserve) we needed to discard the possibility scientifically. This meant organising many different groups to head out on night walks around the reserve to collect frogs/toads from which skin samples could be taken for a chemical assay back in their research facility. The results were encouraging as we did not find any frogs with evident symptoms of the disease but we will not get an all clear until all the samples have been tested in the laboratories. Fingers crossed! 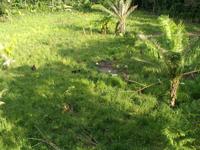 A wonderful bonus to having so many people out at night hunting for amphibians was that we collected huge numbers of frogs and toads and amongst the treasure we discovered two new species for the reserve. The Cinnamon tree frog (Dendropsophus koeklini) and Henle’s Snouted tree frog (Scinax pedromedinae) had not been recorded at Taricaya previously and we now have an impressive record of 50 species of Amphibian in the reserve. If that was not enough, by pure coincidence a group of volunteers was watching TV later that same week when what appeared to be a baby anaconda slithered over some unsuspecting feet! After the expected shrieks died down we caught the offending serpent and it turned out to be an aquatic species previously unregistered in Taricaya. The South American pond snake (Pseudoeryx plicatilis) was our 33rd snake species and takes our grand total of reptile species to 63. A great week for our biodiversity work and our thanks go to Tiffany for sharing her knowledge with us. However, the discoveries did not stop there! 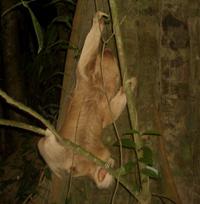 Hugo Zamora spent the month with us and that could only mean some excitement with our mist nets strung up every night and bats a plenty. A regular and popular visitor to Taricaya, Hugo was keen to follow up on his research from earlier in the year. With the exciting prospect of a new bat species previously unidentified anywhere on the planet and an additional species previously unregistered in Peru, we wanted to capture some more specimens from the same area. However, the lunar cycles meant that we had to wait for the optimum conditions with a dark forest floor and so meanwhile we headed out to the pilot farm to sample the open areas along the river edge. We were completely unprepared for what came next! In the space of 4 nights sampling we found three new species for Taricaya taking out overall total to 48. But that was not the end of it as we moved the nets further into the forest the following week only to catch our 49th species. Truly remarkable! As we now concentrate on the area where the potential new species was captured I am sure that I will have more success to report on next month as Hugo has agreed to stay on with us for another 15 days in our joint quest to collect further samples of the elusive new species. It is a very exciting time for us all and I shall keep you posted on our progress.

Whilst Hugo was out in the field Cesar Medina (our small mammal consultant) was busy processing all our data and specimens back in the museum in Arequipa and after hours studying skulls and taking biometric data he compiled a revised mammal list (excluding bats) for the reserve. The impressive new total: 64 species! The careful investigation of the rodent and marsupial species of the reserve has opened our eyes to some gaps in our research and as we continue to design new research techniques and strategies I am confident that we shall find even more new species over the coming months.

As I review our ever more impressive species lists (all available in the Recorded Wildlife Section) it becomes more and more apparent that Taricaya is a very special place. The incredible biodiversity and breathtaking ecosystem never cease to amaze me and our impressive list of discoveries would not have been possible without thousands of hours of hard work, often in uncomfortable conditions, from volunteers and staff alike. As Taricaya increases its recognition globally I am confident there are even more surprises waiting for us in the depths of the rainforest, and furthermore, it is just a matter of time before we discover them.

Continuing on the mammal theme, we have been diligently wading out into the forest on our weekly mammal censuses and whilst water levels are still high in the reserve’s natural depressions the wildlife seems to be returning from the relative safety of the higher terraces in the adjoining national park. This month we were fortunate enough to come across some weird and wonderful animals not least of which was the bizarre-looking Hoffmann’s Two-toed sloth (Choloepus hoffmanni) and a solitary Capybara (Hydrochoerus hydrochaeris), the world’s largest rodent resembling a hamster but the size of a small cow! The walks are hard work if you happen to be on the swimming routes but the great sightings are motivating us to keep going and as the water levels start to drop in the swamps, the going should get easier each week. In parallel to our mammal transects we have also started our sensor camera survey of the reserve and I look forward to showing you some of our sightings from these motion-triggered cameras. This information coupled with the mammal census data and our record of tracks and spoors will generate a full overview of the mammal populations of the reserve and help us understand more fully the dynamics of their behaviour in both the dry and wet season.

Back in the rescue centre we have been hard at work rebuilding our juvenile spider monkey enclosure. With our first adult group released late in 2010 we moved the next group into their old cage allowing us to tear down the smaller cage which was very much on its last legs! With new stronger netting shipped in from Lima and some very hard wood to increase the new cage’s lifespan it was hard work getting all the wooden posts in place to hammer in the large staples responsible for holding the chain link in place. Needless to say it was all achieved with minimum fuss and I look forward to reporting on its completion next month.

When this new cage is finished we can transfer our youngest spider monkeys away from the quarantine area and start the social bonding that will mould our third potential release troop, looking at 2012 as a release target. This youngest group will have an older member in the troop as earlier this month a group of volunteers was out on the river crossing to our neighbours to collect fruit for the animals when they spotted something struggling in the water. As the boat drew closer they were completely taken aback to find a female spider monkey (Ateles chamek) on the verge of drowning in the quick flowing water. Where she came from we shall never know and if we had found her just a few minutes later she would have drowned for sure. Spider monkeys are locally extinct, with the exception of our release program, so she must have been in the river for days which is unlikely unless she had been clinging to flotsam such as uprooted trees. The only other explanation was that she was a pet in one of the local communities but once she recovered from her exhaustion she was anything but friendly towards us which would support the first theory of a long lonely river rider having fallen from a tree hundreds of kilometres upstream. Either way we cannot just release her as they are social animals and rely on living in groups in the wild so she will now enter our release program where she will join our resident individuals on the road back to freedom.

As the rains eased off we started to reopen our reforestation transects in the grassy area of the pilot farm. This is hard work with machetes as the grass is thick and easily entangles the knife’s blade. The idea is to clear manageable lines and plant quick growing pioneer species such as Acacia sp. These plants should be able to grow more quickly than the recovering grass and the resultant shade will help kill the grass in larger areas. Bit by bit we can start to reclaim the open area and our progress will be closely recorded as we want to create a model for recovering grass lands on a much larger scale. This project has huge potential as we hope to show cattle farmers how to recover the huge areas they have cleared to provide their livestock with reasonable grazing.

Elsewhere at the pilot farm we were clearing the banana plantation after the heavy storms and reopening the plots of Heliconia flowers. The strong sun and heavy rains meant that there were plenty of weeds to tackle and there were plenty of blisters to show for the hard work. However, it goes without saying, that we cleared the whole area of weeds and the farm is looking in wonderful condition as we look to set up new experiments in the upcoming dry season.

April will see us finish the new monkey cage, put the finishing touches to the turtle house, continue our biodiversity research, more hard work on the farm project and plenty more....with the centre still full to capacity  there will be many hands to help and so we will achieve lots more once again. Until then......!