Human Rights in Morocco by Claire Been 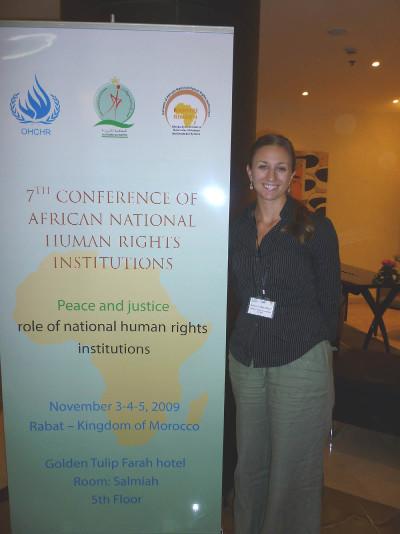 Morocco. The name alone brings to mind fragrant spices, bustling markets, and exotic locales. That's why, when I was looking through the Projects Abroad webpage and saw it was an option, I knew I had to go. After graduating from law school in the United States, I had a few months off before beginning work as an attorney. I was excited to see that Projects Abroad had a Legal and Human Rights placement option, and that I could hopefully use a little of my legal background while volunteering.

I settled upon a two month placement in Rabat, Morocco's capital city. I was nervous but giddy as my plane touched down in Casablanca. Youssef, from Projects Abroad, was waiting there to meet me and take me to my new home. Like most volunteers, I lived with a host family in the medina, or old walled city, in Rabat.

Right away my host family welcomed me in with open arms. My host parents spoke very little English, so I had to get by on what little French I remembered from high school. The food my host mother prepared was delicious and endless and she kept piling more on my plate saying: “Mange, Mange, Mange!” meaning “Eat, Eat, Eat!” My two host sisters and brother spoke English, and it wasn't too long before we were joking and talking about boys and shoes. (Well, my host sisters anyway). I was amazed by how much my French improved over the course of my two months there. 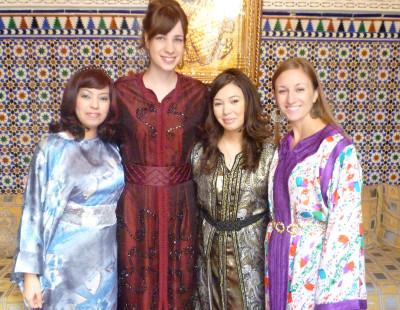 During my stay, I worked for the Conseil Consultatif des Droits de l’Homme (CCDH), or the Advisory Council on Human Rights. The CCDH is Morocco’s national human rights institution, charged with reporting annually on the condition of human rights in Morocco, and constantly working to better the situation for all Moroccan citizens. The beautiful ornate building where I worked was a 5 minute walk from my house which was great, because it meant I didn't have to take the grand taxis to work. (Just imagine 7 sweaty strangers piling into an ancient white Mercedes and you get the idea!).

I started right away working with CCDH's Department of Cooperation and External Relations planning for the Seventh Conference of African National Human Rights Institutions. The Conference took place in Rabat in the beginning of November, and was attended by participants from all around the world. The theme of this year's Conference was ‘Peace and Justice: The Role of National Human Rights Institutions.’ I was thrown right in at work: given the task of coordinating the travel of all the delegates from English-speaking countries. 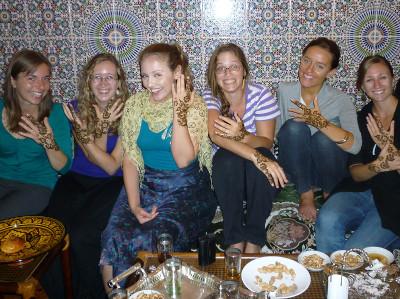 It was a valuable lesson (though frustrating at times!) to see how things work in Africa, realizing that intermittent mail, internet access and phone service to some parts of the continent can make it quite difficult to get a hold of people. It was very rewarding, though, to be in touch with so many interesting and important people from all around the world. I got quite a thrill when someone called for me and I heard: “Claire, so and so from Southern Sudan is on the phone for you!” The Conference itself was quite a success, I was able to spend all three days there, watching sessions about transitional justice, human rights education, and other aspects of peace-building in Africa.

The CCDH does lots of other important work besides the conference I helped with, and I had an amazing opportunity to sit in on an interesting variety of meetings, talks, and conferences. The staff was incredibly friendly and supportive, putting up with my less than perfect French. They treated me like part of their family, even inviting me to come along for a full Moroccan lunch at the home of a colleague who was taking her maternity leave. I am still in touch with friends I made there, even months after returning to the US.

While my volunteer work experience was incredibly rewarding, my trip to Morocco would not have been the same without the amazing friends I found in the other Projects Abroad volunteers. I met them all my first week I was in Rabat, at our weekly get together. I was a little nervous since many of the volunteers had been in Rabat already for several months and had already established close friendships, but I had no reason to fear. I was amazed at how quickly I was welcomed into the fold. 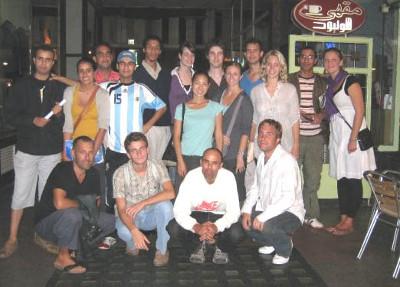 My first week, I had already procured a running buddy for runs around the medina (lots of stares, and crazy looks from the locals), girls to take belly dancing lessons with, and an invite to a talk by one of the teaching volunteer's students about the prophet Mohammed. It was really interesting, and I got into a long discussion with one Moroccan I met about jihad, terrorism, and Islam. I have found all the Moroccans I've met through friends to be very sweet, open, and intelligent.

The volunteers coordinated trips together to other cities and parts of Morocco on the weekends, and we always had a great time. Our most memorable trip was a weekend trip to the Sahara desert. We took the overnight bus, and when the sun came up we disembarked to see the orange dunes rising up against a perfect blue sky. We arranged to take a camel trek, and spend two nights in Bedouin tents in the desert. When we met out camels for the first time, I was surprised by how BIG they were. We mounted up, and headed off in a line, everyone taking a million pictures. After trekking for a while, we dismounted and got to try sandboarding down sand dunes using snowboards. 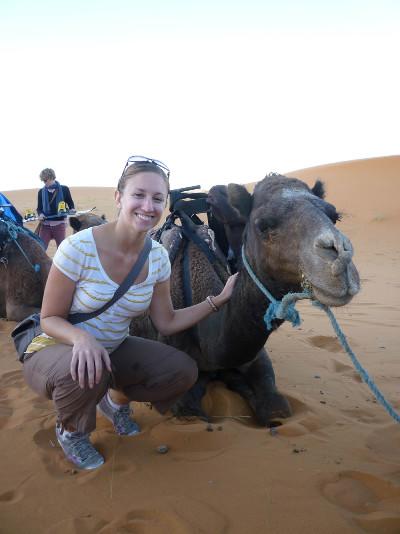 When we finally arrived at our camp of Bedouin tents, night had fallen and the stars had come out. The Sahara seemed to have more stars than I had ever seen in my life. We ate delicious tajines for dinner (a traditional Moroccan style of food) and then after dinner sat around a campfire that smelled sweet from the burning palm fronds. We beat on drums provided by the camel guides while they sang. It was one of those...I can’t believe I am here...moments.

My trip to Morocco was one that I will remember all my life. It was amazing interacting with so many different cultures at once. At work I got used to meetings being carried on in three languages simultaneously: English, French, and Arabic. When traveling with my friends, a friendly Moroccan restaurant owner dubbed us “salad people” because we were so many different nationalities (American, British, Welsh, Austrian, German, and Australian, all traveling together on that trip). We adopted it as our nickname as it so perfectly captured the diversity of our volunteer group. The mix of cultures, viewpoints, religions, and ethnicities in Morocco made for a challenging yet incredibly rewarding and memorable experience.