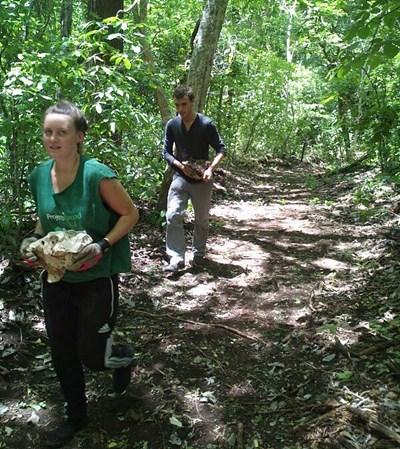 With the onset of the rainy season in the north of the country the end of the wildfire season in the Barra Honda National Park comes as well, however, there were still fires in places like Las Delicias and the Flower Hill. The staff of Projects Abroad is part of the group fighting forest fires in the park. This year we had fewer fires within the park than in 2013, but fighting fires is very tiring and sometimes we had to spend all day in front of the flames so they didn´t spread further into the forest. We were able to do this thanks to the support of volunteers who do things like clean the fire lines and supporting environmental education in the community.

The effects of el Niño y la Niña have been negative: until a few years ago it was very unlikely that tropical forests would be seriously damaged by fires because it rained most of the season and the moisture in the soil and organic matter prevented the fire from spreading. At present, the more the summer continues, the more forest fires will have the potential to damage the ecosystem due to its present fragility. 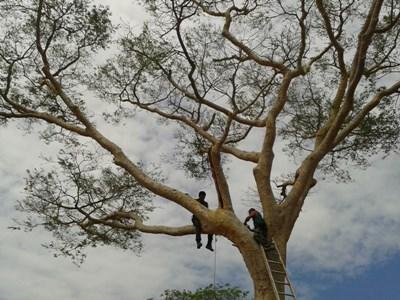 We are still awaiting the birth of the macaw and we continue to check the nest in search of good news. Normally they are born in May but this has been delayed. The work will include the monitoring of the nest, checking that the Gallinazo Tree (Shizolobium parahyba) is in perfect condition, and then reviewing the nest. Then the group must wait to see if adults come to nest.

This is a project where we seek to preserve the macaw species because these macaws are the only mating couple around, which is why we want to protect the potential hatchling. In previous years, the hatchling has been stolen by people looking for a little money on the black market and we are looking to prevent this from happening again. Our goal is to make the scarlet macaw population in the north of the country grow and continue protecting the important and wonderful scarlet macaw. 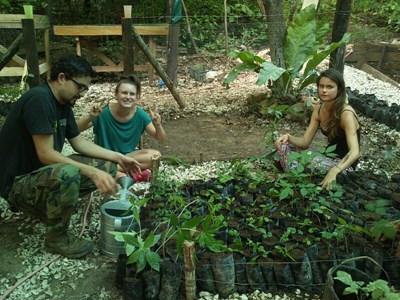 I have good news, our nursery has been expanded to protect the different species of native plants we have in the area and now it has its own germination bed. This bed is used to germinate seeds collected from the forest so that we may plant the saplings when they are big enough. Every rainy season we have worked to plant these trees in wooded parks or communities around the National Park, as the water enhances their chances of survival. This year we hope to plant more than 3000 trees in the Barra Honda National Park, plus we are going to plant trees in other National Parks such as Marino Leatherback, and Humedadal Corral de Piedra.

This initiative is one of our flagship projects, the Blue Flag for schools in communities around the National Park. The ecological blue flag is an award given to the schools that engage in activities that help the environment and this project was started six months ago. Every day we have been working to build biojardineras (organic gardens), storage facilities and an area for compost schools.

The blue Flag is an award that very few schools have, it is also an education for children and each school has a blue Flag committee. This committee will be given an induction on how to follow the Projects Abroad guidelines. The idea being that over the coming years the schools and communities will be able to operate the programme independently where people in the community take care of these projects year after year. 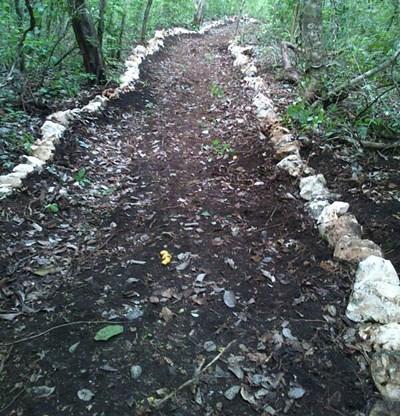 Global warming is an issue that is affecting the whole world, for that reason Barra Honda National Park is in search of the blue flag for those protected areas where work is undertaken to decrease the use of energy. To this end it has created a committee of people who will be working to achieve this goal.

To date we have redone some water piping and are currently saving 608 litres of water daily which equates to 7.3 cubic liters of water per month. Our main goal is to make the camp sustainable due to the climate changes we are experiencing right now.

The Blue Flag is an award or badge that is awarded annually, which rewards effort and volunteer work in the pursuit of conservation and development, consistent with the protection of natural resources, the implementation of actions to address climate change, the search for better sanitary conditions and the improvement of public health of the citizens of Costa Rica.

One of the hardest jobs we have had has been the creation of a new path in the park. This trail is circular and crosses the main caverns of Barra Honda National Park. We have worked on the floor of the trail and in a line of stones that define the its borders. This has been one of the most strenuous jobs we've had, but all are happy with the progress of our work, as this path will be very useful for our research projects.