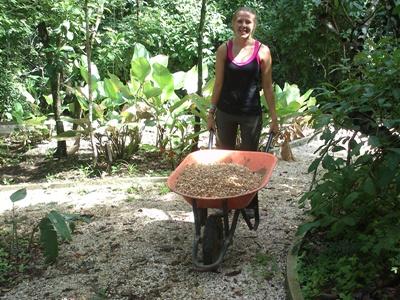 This month was an unusually dry month considering that it is currently the wet season in Costa Rica. Normally during this season, it rains almost every day but, in August, we have hardly had any rain at all. Nevertheless, the climate is tropical so very humid and we still sweat a lot during work. We continue in our work to build a terrace for the volunteers and we are also finishing the bio-gardens at the schools.

The purpose of the bird survey is to identify and count the different residential and migratory bird species that live in Barra Honda. Some of the surveys are designed to observe birds that fly above the canopy, such as the king vulture (Sarcoramphus papa) and the scarlet macaw (Ara macao), from various viewpoints at the top of Barra Honda Hill. Other surveys consist of walking along designated trails to observe birds that live within the forest, such as the plain wren (Thryothorus modestus), the northern-barred wood creeper (Dendrocolaptes sanctitomae) and the blue-tailed hummingbird (Amazilia cyanura), just to name a few. You are sure to hear the various bird calls as you walk through the forest and, with a keen eye, you will have the opportunity to see the wide variety of birds that call Barra Honda home. 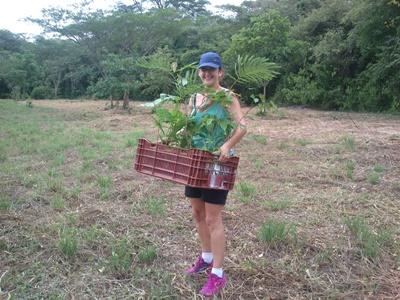 The objective of the new bat project is to analyze the community structure of the bats that are present in the caves at Barra Honda. Each month, we will capture a bat at four different caves that they are known to inhabit. Collecting data on these bats will help to answer questions about abundance, species diversity, behavior, diet, and change in residence so that we can further our understanding of the important role bats play in this ecosystem.

One of the latest engineering endeavors that the park has undertaken is building a new terrace for the volunteers. So far, staff and volunteers have learnt a great deal about basic engineering and problem solving as we complete the tasks necessary to build this new structure. We have laid the pipes for the new water system and established the basic beam structure for the terrace, and we plan to start the roof and floor shortly.

After only one month, the sensor cameras captured images of a tayra (Eira barbara) and this is great news because the last time we saw this species was three years ago. We are currently using a new method of placing the cameras next to the river, which means that we can capture footage of them while they are drinking water.

We have 14 permanent stations. Up until now, the cameras have captured the activity of species such as the turkey vulture (Cathartes aura), the blue jay (Calocitta formosa), the ocelot (Leopardus pardalis) and the coyote (Canis latrans).

The adventure starts in the morning when the team has to walk along the river to set up the sensor cameras at every station while also keeping an eye out for animal tracks. This is also a really good way to find out which animals have been crossing particular sections of the park. 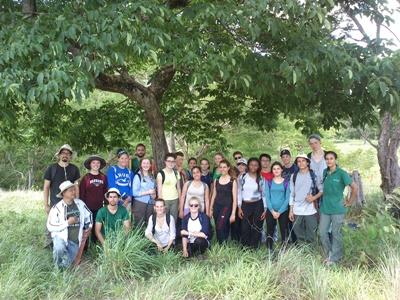 July and August are the months where Projects Abroad offers Two Week Special group trips in Costa Rica for volunteers aged between 16 and 19 years old. We have had two different groups in July and we are expecting our third one in August. Over the past few years, we have worked with these groups in Barra Honda but this time, we took them to a different national park called Diría, which is about a half hour car drive from Santa Cruz. Diría National Park consists of 7,000 hectares of land that we know very little about in comparison to Barra Honda, which is only 2,000 hectares and where we have done a lot of work so far. In fact, there are most likely places in Diria where no one has ever been before so it might be possible to discover different animals or species there.

Over the course of the group’s stay, we also helped at a marine national park, where we did a beach clean-up. The camp there was very small and virtually in the middle of nowhere. This made it very quiet and increased our chances of seeing wildlife at night.

With the help of the volunteers, we also managed to construct a new trail at Barra Honda National Park. This trail will be very useful in the future for accessing research stations.

Furthermore, we planted over five hundred trees around the national park as well as in surrounding communities.

On weekdays, the volunteers typically work from 8.30am-12pm and then from 3.30-5.30pm. They then often use their free time during the day to go to the pool, play chess, read or explore the wildlife around the park. In the evenings, volunteers sometimes go out to practice salsa and meringue, or play different card games taught from around the world. One of the highlights for many volunteers is the weekly football game in which staff, volunteers and local children play with a very high level of enthusiasm. The extremely supportive atmosphere makes playing football a fun and memorable bonding experience that many volunteers treasure long after they have left.