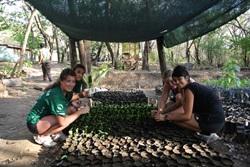 February was a month where we launched several new projects. For example the project started with a focus on birds, then we began working on the new biodigester. We also had the management plan for the fore-coming year to work on, along with visiting the wetland Corral de Piedra to take stock of the migratory birds.

We started this project last year; the main aim of this project is to rescue this species. Then, we monitor the nest 24 hours a day.

The Scarlet Macaw (Ara macao) is a bird of great beauty, their populations in Costa Rica are small. The major issue is that each year the chicks are removed from the nests for sale on the black market, which makes their conservation very important.

This is one of the oldest projects here. We have a lot of information of this species. The staff and volunteers visit the forest every week to study the bats. Barra Honda National Park is an important site for the conservation of bats, as on the site there are colonies of thousands of individuals who roost in different caves of this protected area, mainly in caves "Well Reek" and "Nicoa ". Also some bats are able to build their own shelters using leaves of different plant species.

There is a new behavioural report for a small species of fruit bat (Artibeus phaeotis) which has been observed nesting in a tough Panama tree (Sterculia apetala). This choice of tree is uncommon in South American bat species which generally prefer building their temporary nests with the softer leaves of the abundant Heliconia species, often shaped like banana leaves. 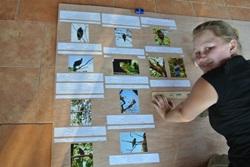 Barra Honda has an important dry forest ecosystem that contains many species of birds that are endemic to tropical dry forest, others that are in danger of extinction and also some that are really striking and rare. For this reason we will create a census that will show us about what kind and how many birds we have in the different national park habitats. Also know if exist a relation between them and compare the population with others studios in similar forests.

With this project we and volunteers have a new inventory of birds a new list:

We have great news, the nursery is almost finished and we have over two thousand plants to go to plant in the forest. The species are: cedar, sweet cedar, Tempisque Cocobolo. The next step is to wait for the rainy season which starts in May for planting these new trees in the forest.