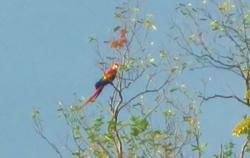 In January 2012 we began one of the most exciting projects for Barra Honda National Park, the Scarlet Macaw protection program. The main problem that the Scarlet Macaws are facing in and around Barra Honda is the illegal poaching of the chicks when they are a few months old.

They are splendidly brilliant birds who have amazing colours and long tails and fly majestically through the forest and for this reason people love to have them as pets, not knowing or realising that wild animals (which they are and will be for their whole lives) will grow and become aggressive, or get sick and die from bad diets or disease and they are expensive and hard to look after!

Around the area of the park there are at least 4 different nesting sites that are used each year and each year the poachers find the nests and steal the chicks to sell into the pet trade...most of the time they receive "orders" for a certain amount of birds and then go out and try to fill these orders. This is obviously having a very negative impact on the population of the macaws, as they are not increasing their population in any stable way.

We are hoping that with our protection program, which will involve bi-weekly visits for the next month and a half and then full day full week visits by various groups of people from then until the chicks are old enough to fly and defend themselves, we will be able to help the macaws increase their population each year.

During our first visits to the area we have had time to check the equipment we have, work on the process of actually recording the information and we have been lucky enough to get some great views of 2 sets of macaws in their nests, we don't think they have laid eggs yet as we saw one couple in the process of mating and the other couple spent a lot of time outside of the nest which implies its empty. We think that the next visits will give us more information on the stage we are at with the eggs as we should start to see one macaw spending more time in the nest than seeing both leaving the nest at the same time. 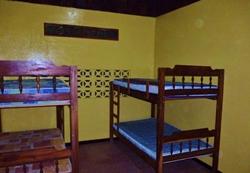 Each month we will be adding two updates to our new Facebook site (Scarlet Macaw), we are also adding updates on the Mytripblog site and on our main website as well. So you will be able to see lots of photos and news about what's happening at all times.

Also this month we continued our efforts at renovating the volunteer rooms. After so many visitors over the last 4 years things are starting to get a little tired. So we did things the easy way, taking everything out of the rooms, sinks, toilets, fans, lights, beds, tables and shelves, washed the walls and ceiling completely and then rewashed the walls so that they were ready for painting. The whole process, from the day we took the things out of the rooms to the day we put everything back we worked constantly on getting everything into the best condition we could. Sanding the skirting boards and re-varnishing them, painting the walls, cleaning the showers and sink and toilets with such fine detail that they actually look brand new and replacing all of the fixtures and fittings until we got everything in looking as new and clean and fresh as possible. I'm sure you will agree that things are looking pretty good in the cabinas now!

For 2012 we have adapted all of our investigation projects slightly. Instead of working each week with the projects and having half the month getting poor results in one project (like the bat project because of the full moon for example) we have decided to run things so we get better results with the projects when we run them. This means that each month we will only be running the Butterfly and Bat project twice each, 2 weeks with the bats then 2 weeks with the butterflies and we will also be leaving the cameras out in the field for 2 weeks at a time then 1 week break for recharging and cleaning. 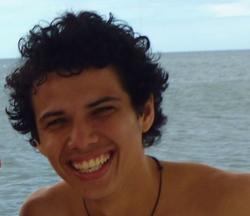 This means that whenever we do the investigation projects we will be getting more results each time giving us a better representation of the wildlife for less time spent in the field. One of the reason why we have decided on this move is because the sites where we will be working are much further away than last year (they are now about 5km away from the camp) and also because we needed to make a little more space to add the other investigation projects (frogs and the macaws) on to the schedule. Hopefully these changes will mean that we get more results to tell you each month with more photos and more facts and figures!

One of the bigger jobs that we have been doing over the last 2 months is building the new kitchen drain. The old one was starting to have a little trouble due to the added amount of water and just the age of the drain meaning that the soil was becoming saturated with oil and grease from the kitchen. So we decided that we needed a new, bigger drain. This one measure over 3 meters long almost 2 meters wide and a massive 2.5 meters deep at one end. All this digging took a lot of work. The new drain also has a couple of new grease traps to deal with the added load that we have been experiencing with added amount of volunteers each day.

2012 is also special because we have been able to add another member of staff to Barra Honda. Coco (Oscar is his real name) was originally here at the end of 2011 working with his class mate Macho on a frog identification project for Barra Honda. We decided that with the extra workload we needed to have another good worker to help us out with all of the extra work we wanted to do this year. Coco is someone who has excellent knowledge of wildlife and investigation methods but was raised on a farm with his family, so he knows all about working with tools and machines and the practicality that life needs sometimes. Coco is officially in charge of the Scarlet Macaw project for this year but we are also using him with other projects and different work throughout each day.