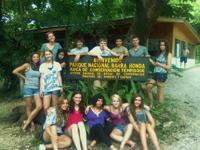 The last couple of months have been the busiest on record here in Barra Honda, we have had more people, more work, more projects and more people arriving and leaving than ever! This has been exciting and very entertaining!

As with the last few years we have had our summer 2 Week Special groups, who arrive for 1 week here in Barra Honda and one week in Liberia and one group who do 2 weeks in just conservation. This has meant that for over a month we have been working with 24 volunteers and has obviously meant that we have a lot of work preparing for each group. 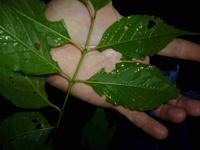 Many small jobs have been completed over the weeks running up to the first 2 Week Special arrival; finishing the new Cabina was one of the biggest jobs. This meant tidying up the paint work, fitting the bathrooms and doors, making sure the electrics worked and adding the beds, mattresses, pillows and smaller items like shelves! The final result is pretty impressive to be honest with you; the room has been finished off very well and is bright and comfortable for those lucky enough to sleep in it!

As well as the Cabina, we have also managed to finish off other jobs around the park. The new laundry area was missing a couple of small things and of course the mirador (look out point) needed a few final parts to make it safe. We have been working hard on fixing up the tables in the office and dining room to make them more presentable and cleaner for the next few months! All of these jobs were planned and organised to be finished before the summer arrivals and with a lot of hard work we managed to get everything in place and ready in time. 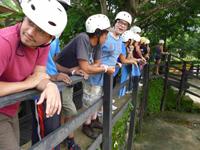 We have also been very lucky with the weather this year, having groups arriving mid-wet season in Costa Rica isn't as bad as it sounds to be honest with you. During the end of July and August we have a short Indian summer which gives us a short respite of a couple of weeks to get through the 2 Week Special groups without too much rain!

It still rains a small amount every few days, but usually in the evenings and nowhere near as much as normally! We have only had 7 days of rain during the end of July and start of August as opposed to every day before. This does mean that certain areas of the park are not as impressive as usual - The waterfall for one doesn't have as much water as usual and neither do any of the springs or rivers that run through the park. 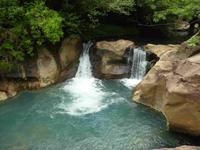 The Indian summer does mean we have a little time to clean the drainage ditches and in some cases make new ones around the office and along the main roads and trails of the park. These ditches, which are hard work to make and maintain, are very important for keeping the roads and buildings in good condition. Because of our situation on the side of a hill we get A LOT of water pouring down the side of the hill and mainly down the roads and pathways towards the bottom. If this water isn't slowed or diverted then it can destroy the road and flood buildings in just one heavy rainstorm.

This year we have been very successful in preventing damage along the roads and to buildings, we have made several new ditches in many areas of the park, along the main trail into the park and especially around the office area itself with 10 new ditches to carry the water from here back into the forest and into rivers and creeks. 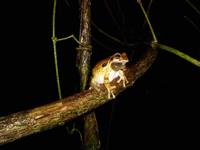 Over the last 2 months we have done a lot of great things with our investigation projects. One of the biggest developments that we have had has been with the Bat project. Whenever a protected area is created there is a mission statement - a list of objectives that the park needs to comply with and certain points that it needs to work specially to protect.

Barra Honda was created with the cave (or karst) systems and natural springs in mind, along with the actual forest and animals that are in the area as well. Over the last 2 years we have been working almost every week capturing bats and identifying them and marking all the characteristics we can about them. This has been a huge amount of work and in total we have captured over 600 bats. Using all of this information and doing a lot of analysis we have managed to bring some very important information forward about the population of bats within the park. This has also lead to the inclusion of the bat population into the mission statement of the park. This means that the bats now have a higher priority with the conservation work we do in the park and also means that any work we do with the bats is monitored, reviewed and studied at a national level by universities and other conservation groups.

We have also made some large strides in the butterfly project. We have been doing some reading on the findings outside the park, to give us an idea of how many species we are missing within the park, and found that studies outside the area have been finding between 90 and 100 species in areas similar to Barra Honda. This means that we should find a similar number as well. So far we have 60 species identified with another 5-10 that are potentially different species and need to be identified before we can add them to the list. This means we only have another 20-40 species left to find.

Obviously these species are the harder ones to find, the ones that fly higher or in certain areas of the park we don't visit as often or that they are just rare species and we haven't caught them yet. As we have seen that the end is near with this project we have been working extra hard over the last few weeks to try and get things done a little faster. Once we have all of the species caught and identified we will be able to move on to stage 2 of the project which is identification of caterpillars, eggs and the plants that play host to each species.

This should be an exciting stage of the project as we will have to build a butterfly house so that we can put the eggs, caterpillars and chrysalis into the house so we can observe the different stages of development and identify the species that come from each type of egg and each type of caterpillar.

As already mentioned we have been working really hard with the 2 Week Special groups this year, but we have also been able to take them out of the park and show them a few other parts of Costa Rica! This year we did the weekend trip to a private ranch near Rincon de la Vieja. It has an amazing variety of activities and the tour we did included horse riding, tubing (rafting on an inflatable ring) zip-lining and finally a few hours in a spa. It was the first time that I had done many of these things and although at the end of the day we were all exhausted we all felt like we could have done with more time on each activity!

And finally I'd like to talk about the progress of the management plan that we working on with the help of the park and the national Universities in Costa Rica. The Management plan is something that every protected area should have. It sets out the area's aims, how to achieve them and how to measure the success of each project. Obviously because of our unique system of working with volunteers in the park we have a little more complex work to do in organising how this work is done and who is responsible for what. The first stage of this work is actually continuing what we have already been doing; working with investigations to identify what needs to be protected and how.

These extra evaluations have been done mainly by the University of Costa Rica. Several students have been arriving over the last few weeks to do studies on bats, botany, birds and insects which have been giving us a little more variety in the work we have been doing with the volunteers. The whole management plan will take years to complete, but the work we are doing now and the work we do in the future will always be focused on the development and eventual completion of the plan so that Barra Honda becomes the first park in the area to have a full and complete plan to guide us in the future of conserving this area!