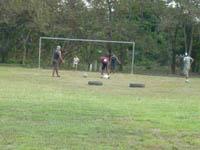 I was recently looking over the reports that I've written in the past and noticed January 2010, which was a good month for us, the start of the best year we've had, a good amount of interesting projects, some good fun maintenance work and a good group of volunteers.

This January is even better! The start of another amazing year? Better than the year before? That's what we are hoping for anyway! We have started the year off very well this year, we've started construction of a new building for volunteers, we have our 3 main investigation projects running very well and we have began final plans for a great new project that will help the nearby Scarlet Macaws.

Our three investigation projects this year are working well already: the sensor cameras, butterfly and bat projects. We are having a tough time clearing the routes we need to get to the correct areas as this year we are working more on interior forest which means going around 300m of the trails and borders of the park, but we are already getting some great results. The results from the sensor cameras have been amazing...from just 1 week on the cameras we got 5 different species (Howler Monkey, Deer, Agouti, Coati and our Ocelot). 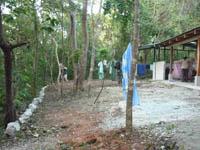 The butterflies are bringing in around 80 individuals each time we put them out and we are getting many different species each time and the bat project is running very similarly as well, many species in a single night and lots of individuals! The areas that we are using are very hard to get to, steep inclines and long walks, but the results we are getting are very important and they are giving us so many good results that we honestly can't complain in the slightest!

We also had a visit from Clive and Fiona, who are among Costa Rica's best known Macaw experts, we have been trying to get them here for a long time to visit the area and get their professional opinion on the Macaw population and ways we can improve the area to help the Macaw population. They spent 6 days with us, walking 3 times a day, early morning, late morning and then afternoon, visiting many different areas of the park to try and see if we had nesting sites and feeding sites for the macaws that we do see transiting over the area. As some of you may know, Macaws are very specific about where they nest (for such a brightly coloured big bird they need to be to avoid predators!). 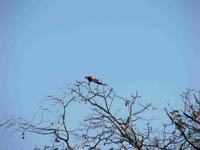 Even after such a short visit they are pretty confident that we have many areas that are great for Macaws to nest in, safer than areas outside the park which are currently being used by nesting pairs. Unfortunately Macaws can be a little stupid at times and once they have found a nesting site they usually stay with it until it falls down, so they aren't coming into the area because they are happy with the sites outside on the boarder of the park. This made us begin to think why the population wasn't increasing and new pairs flying into these nesting sites? After a few interviews with the local people we quickly found out why...the Macaw babies were being poached each year by locals.

Our next investigation/protection program is already in its final planning stages, one of the local farmers, Simon, has three nesting sites in his land, 2 of which are occupied at this time and will probably have chicks in the next 6 months. We already have Simon's permission and have quickly began sorting our transport, equipment and food supplies for one of the biggest, longest and most important projects we have started so far, we are going to build a small outpost in the middle of the nesting sites so that 2-3 people can live there 24 hours a day from before the chicks are hatched to the day that they fly the nest and settle in a new area...protecting the young. Normally Macaws lay 3-4 eggs each season...usually with natural selection 1-2 of these will perish before they leave the nest, but this means that each season we should be able to increase the population of Macaws in the area by about 4-6 Macaws, which may sound really small, but is a huge increase! Obviously with this increase there will be more Macaws in the area which will look for different nesting sites each year, increasing the size of the project each time we do it! Stay tuned for more!

As we begin plans for another long term project we are finishing off another, our community sports area (football field as most of you know it) is pretty much finished off now, with just small bits of maintenance every few months to make sure it stays in good condition, as you can see from the photo the improvement is amazing! Unfortunately I don't have any before shots (any volunteers from December/January 2008/2009 please sent me a photo if you have any!). But those of you that have worked on it can clearly see the difference and we are very happy to tell you that people use it all the time...in fact I haven't seen a day this month that there hasn't been 20/30 people playing a game of some sort on there!

For those of you who have forgotten why we've spent so much time on this area - it's because we wanted to give something free to the community, bring more people into the area in a friendly, free and fun way, giving them a good place to play a game of football is a great start and soon we will have community events and organised games on the field to increase the parks image even further!

And finally this month we have finished off most of the work on the new laundry area and begun tidying the land around the laundry area...I'm just going to leave you with a before photo this time, next month when I send the report I will be sure to include an after photo with the whole area looking amazing!

Thank you all for your help this month, as usual this is only a small amount of the work we have done in the Barra Honda National park, I could write for days on all the small things we all get up to!