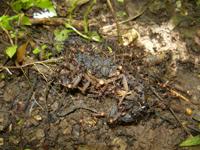 As I mentioned last month we have been setting up and running a few new projects in Barra Honda over the last few months. Another of these projects is the Intensive Search Project, which is running along-side our three main projects - bat identification, mammal identification and butterfly identification projects.

The basic idea of the Intensive Search Project is to go out into the forest and look for anything that we can find. It's a tough job; walking through the forest and looking for the tiny things takes a bit of practice as the old saying goes "trying to see the wood from the trees". However, once you get the hang of it you can see many things that you don't normally take the time to look at, army ants carrying their prey, wasps building a new nest, bats nesting under an old tree, things that we would normally just walk straight past!

The reason we are doing this is to record exactly what there is in the park, from insects to animal tracks in the mud. This data then helps us with a lot of our other projects (animal prints can help us confirm species in the park, bat nests can help us do the same and insects are food for a lot of other animals in the area). It's also a great chance for us to show the volunteers some of the smaller parts of nature that are truly amazing! 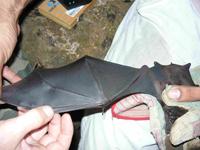 The average army ant colony will attack and eat up to 100,000 prey animals each day! That's 100,000 less insects just from one group, some of these can be as big as tarantulas whilst others will be as small as crickets...basically anything that isn't quick enough or clever enough to get out of the way! Sounds terrifying but ask anyone who lives in area with army ants and we all say the same, army ants are great because they clean the house better than your mother would, it's pretty amazing to watch them doing it too!

According to the authorities September has officially been the wettest month in 2 years! We have certainly noticed some wet weather here, in fact it's rained almost every day and on some days it rained all day too! It's been fun working in a cooler climate though, we haven't been sweating as much as normal and it's refreshing to be able to stand outside and wash away the dirt as we work! 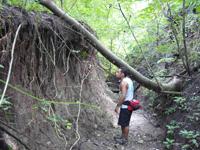 Happily we have finished a lot of our large maintenance jobs for now, so we didn't have to worry about rain stopping us from doing jobs like fixing the roads or clearing the drainage channels, this actually gave us a little more time to visit the waterfalls, which we have done 3 times this month with different people. Each time we visited we managed to see the waterfalls full to the brim which is just amazing to see, water crashing down from the top all the way to the bottom with a few areas in between where you can actually sit under the waterfall and keep completely dry! It was especially interesting one time when we were there as it started to rain heavily whilst at the waterfall. The water changed from crystal clear to chocolate colour in less than 5 minutes! Surprisingly this didn't stop anyone from freshening up in the water...I guess when your all dirty after a long walk and getting wet from the rain, a little dirt in the water doesn't really matter!

One great thing about all this rain is that we have had the chance to test our new weather system, which not only records the current weather every 15 minutes and saves it for download, but also predicts the weather for the next 6 hours with amazing accuracy, whilst testing it told us that it would be sunny in the next hour and it was, the first sun we had seen in about 2 weeks! Managed to get my laundry done and dry thanks to its predictions! We will be posting the weather results on the webpage each month starting from the end of October! 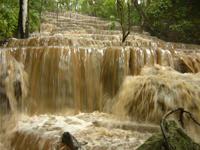 As part of our community work we often get asked to visit various schools, churches and public areas around the park to help out with big jobs and we also get invited to educational events to help raise conservation awareness. Next month we will be taking part in a cultural awareness day at one of the local schools, this day is perfect for the volunteers and staff to take part in as we have volunteers from all over the world, who are always happy to meet and get to know the local people from Costa Rica.

During this event we have been asked to cook a typical dish from each of our countries. Currently we have volunteers from England, France, Denmark and Sweden taking part in this event...plus a little bit from Peru I think (where I lived for many years). As I'm sure you can tell this is going to be an interesting day for us, all of us cooking something typical from our home countries to try and impress the Costa Ricans... could go completely wrong! Any suggestions for what to prepare for England and any other countries will be greatly received! Check out our page on Facebook!

Whilst on the subject of Facebook, take a moment to check out our Miss Bat competition as well, we have 12 different bats in this contest which we would like you all to vote on to help us select the best bat we have captured this year. Best is down to your opinion - best looking, best teeth, best laugh. Leave a comment as to why you think it's the best. All of the bats were captured during the bat project here in Barra Honda and have been digitally altered for the photos. We will be announcing the winner on the 7th of November! Join the Barra Honda Facebook group by searching for Projects Abroad Barra Honda National Park The Official Group.