As with every month so far this year, March has been another brilliant time for us at Barra Honda, we've had many volunteers with us for the last couple of months and we couldn't be happier with them, hard workers, good company and always asking good questions about our time together in Barra Honda, what more could we ask for? 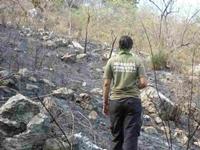 As we are now in to the strongest part of the dry season, a lot of our work has been focused on fire prevention and detection in and around the park. Fire prevention is a tough job in this area, especially at this time of the year and involves many long walks along rough terrain, through firebreaks and trails raking and clearing them with machetes, especially hard at this time of the year because of the extreme heat we experience on a more regular basis which on occasion has reached 43C!

Fire detection is a slightly different job but involves even more walking, working with Oscar Hernandez (the park's representative for fire control) we have coordinated several walks around and through the park to areas that normally don't get accessed but are on the border with many farms that regularly practice slash and burn techniques. During these walks we can see areas that are likely to be burned. From previous experience and from fire breaks that these farmers make along the limit of the park shortly before they actually set the fire, we write the coordinates and take photos and report this to Oscar, who then continues to patrol these areas more regularly. During our walks this month we identified a few areas that looked at risk but were lucky to not find any fires in these areas. 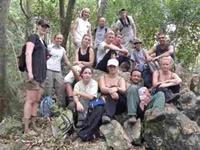 Another exciting thing about March is a natural phenomenon that occurs in the Terciopelo cave, during the final weeks of March the earth's position to the sun is perfectly angled to cause a direct beam of light to penetrate the entrance of the cave and strike a strangely flat area inside the cave. This only occurs for a few hours a day and only at this time of the year. The cave has been explored by archeologists (who didn't find anything of archeological interest), however, there are many people in the area and in the country that believe that this is a religious site and flock to the area to visit and view this strange phenomenon, mainly due to the fact that this positioning is best during the Easter week. Coincidence or design? You decide...

As with the previous months we have been getting amazing results from our Automatic cameras and from our Bat project. The cameras have continued tracking the Ocelot that we first photographed in February, although like February the photo wasn't complete, in fact this month it was even worse, only capturing the very tip of its tail, which meant we needed a few hours of looking and discussing before we could agree that it was the tail of an Ocelot!

Our Bat project has been giving good results as well, with many different species during the course of the month over several different areas during the late hours of the night! We now have 15 species identified in the park. Previous projects have identified 23 species in the park, but at least 2 of the species we have are not included on those lists so although not official at this time we are confident that we have 25 species in the park now, which makes all of the work so far worthwhile and gives us good incentive to continue working towards the future!

Due to the fact that we have received such hard work from our volunteers lately we wanted to take them out for the afternoon on one of my favorite tours in the area along the Tempisque River. As with previous journeys we were blessed with good weather and even better sights along the way! Many different species of bird including Anhinga, Yellow Crowned Night-Herons, Bare-throated Tiger-Herons, Cattle and Great Egrets, Little Blue Herons, Wood Storks and the beautiful American Swallow-tailed Kite. We also several different Iguanas of different size and something that the volunteers always love to see, the American Crocodile. Although not a long tour, only about 2.5 hours, it's amazing how much you can see in such a short amount of time and in short area. 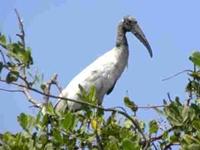 We have also been continuing some of our long term projects this month, working on the park's recreation area (football field) and continuing with our new Organic Vegetable garden which we hope to have ready to plant in the next few months. We have also continued our maintenance on our Tree Nursery garden, where we had to replace the roof which had started to fall down.

The biggest job we have started this month is repairing several parts of the main trail to the cave, which has meant several days of digging, cutting, pushing, pulling and hitting with hammers to make the worse parts of the trail flatter and easy to walk and drive on.