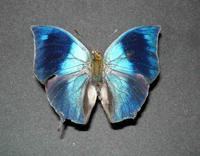 After a slow December, January has been such a change for us here at Barra Honda, that we have been rushed off our feet! We always planned that January 2010 would be big time for us, refining many of our investigation projects and starting many more projects around the area.

The changes we have made to our butterfly and camera projects has been substantial but have already shown some impressive results. As always we are using GPS locations to determine the exact position of the cameras and butterfly traps, but now we are working in transects. Each transect is roughly 50X50M meaning that we can place 1 camera or 3 butterfly traps in each corner and an additional 2 cameras in random sites around the area. Using this method we are able to determine what species are located in certain areas and in the case of the butterflies, which altitude (2,4 or 6M above the ground) they prefer.

Obviously with both projects we are still aiming to identify new species as we go along, but now that we have 1 year of data from 2009 we are in a much better position to begin working in this way.

As you can see from these pictures, we have already captured some impressive photos from the cameras and have some interesting data from the butterfly project.

The most exciting project for me this month has been the start of our Bat identification project, a new project is always a little tricky to start, making sure you have all the equipment you need, discovering that some of the equipment isn't suited for that type of work, getting all of the equipment set up and getting into the work can be difficult and tiring but with months of planning and help from many people we managed to set our bat project up perfectly from the first night. 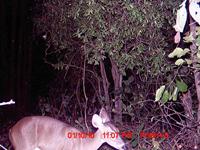 Our first night on the bat project was better than any of us could have expected, with us capturing about 4 different species using only 3 nets. We are using the same techniques as the butterfly and camera projects gradually working our way into the park using transects so that we can identify species and areas that they frequent.

As we have been running this so well during our first month we have also been helping the guides in the park by doing sample captures in different areas of the park so tour groups can see up close what the process is and what a bat looks like.

The bat project runs once a week now, from about 7pm until about 12midnight, which allows volunteers to experience a new side to the forest we live in, working at night is completely different from days, everything changes late at night with the chance to see and hear many new and exciting things!

Another interesting project that we began this year is our meteorological project. We acquired a cheap but very effective system to begin taking weather data every day; temperature, humidity, pressure, wind speed, wind chill and rainfall. Each month we will be able to accurately describe the weather for the area, which up until now has not been done. This information is useful for us as it relates to our investigation projects, it also helps the forest fire fighters in the area to help predict the coming dry season and is also useful for the surrounding communities to help with farming. Although this project doesn't require a lot of people to take the data it is very important for everyone here. 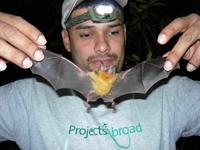 We have also moved on to a new phase at the football field, we began installing the irrigation system for the area a few weeks back and have already began to see a huge difference in the area, with the grass shooting back in places we didn't expect. Obviously we are being very cautious about the water usage in the area, only using the system at night to have maximum benefit from it (The heat in the afternoon is enough to dry out the area almost straight away!) and we are only using it once or twice a week depending on the maximum temperatures we see at that time.

As well as the new work we have done on the football field, we have also begun and almost completed a new construction job on the trail to the Mirador viewpoint, building cement steps along a steep incline to the area. Like the cave work we began last year we were worried about safety in this area because during the wet season this incline becomes very slippery and we want to avoid any injuries or accidents in the area by making cement and stone steps along that area which will provide a lot more grip.

We are all very excited about 2010 as we are moving forward every day with new ideas to help improve and protect the park. So stay tuned over the coming months as I am 100% sure to have exciting news and additions every time!