December is always a month for finishing things off, I think that's true for everyone around the world, we all want things to be done for one year so we can start the new year with no backlog of work still hanging over us from the year that has just passed. Staff here at Barra Honda are no different, so we have been working hard to finish 2010's investigation work and get things ready for 2011 so we can improve on things even further. The final activities of the camera, butterfly and bat projects all gave us some brilliant results which really made the month even more exciting!

The bat project's final 2 sessions gave us a new species of bat not only for Barra Honda but for the area of Guanacaste, the Centuri senex (wrinkle-faced bat) is one of the more specialized species of bat we have encountered in Barra Honda. As the name suggests its face is covered in thick wrinkles which are used to help the bat feed. It peels the skin off very ripe fruits and then literally stuffs its head in and mashes the fruit up. Doing this makes the juices trickle down its wrinkles and in to its mouth! The Centuri senex has never been sighted in Barra Honda, so this new species now brings our total to 30 which we are hoping to improve upon even more in 2011 by surveying different areas further into the forest.

The Sensor Cameras have also been giving us the usual good results this month, we have captured photos of several deer, our young ocelot again and an armadillo, but the best thing to happen on this project this month was the sighting of a new species of snake, Tantilla armillata, which we sighted near one of the cameras. This species is completely harmless to humans, mainly feeding on scorpions, spiders and centipedes.

The Butterfly project actually finished ahead of schedule this month, mainly due to the good weather that didn't affect this project as much as the other two. We managed to finish the butterfly project for this year during the first week of December and managed to capture another species of butterfly. Currently we trying identify this new species but we are confident this will bring our total up to 69 species, which is a good start but we think we can find a lot more. 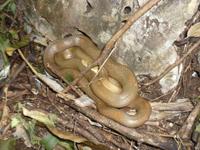 As always we have been doing several other jobs around the camp, one of the bigger ones was finishing the new laundry area, which is now as finished as it will be for a while (just the electrics and a little more work on the drainage system to do). The reason why we have put the final touches on standby is because we have had to start a new project urgently...a new building for volunteers!

Our projected numbers for the end of January have meant making a new building to cope with the numbers and of course throughout the year we will now have 4 rooms so people can spread out a little more and be more comfortable. As I write this the building is quickly taking shape, the walls are half done and we are hoping that it a week or two we will have the whole thing finished so our new volunteers will have a new room to start their stay in!

During December we also took a business trip to Palo Verde National Park, we were invited to their investigation area so that we could exchange ideas and information with the people there. It was a good day out, we learnt a few interesting things about the bird projects they have running in the area and we were able to teach them a great deal about how to make things happen a lot more quickly.

We finished the day with the chief of investigations in Palo Verde and were able to plan another visit, this time with the volunteers in a month's time. Hopefully we will be able to show everyone what Palo Verde has to offer and why it is so important to the conservation of wildlife in Costa Rica.

Of course December is also a month of Fiestas and Christmas. The New Year is a great time for us to celebrate all of the work we have done over the year, all of the new discoveries (several species of butterfly, 2 species of mammal, 9 species of bat and several new species of amphibians and reptiles) and of course all of the projects we have completed (completing the hard work on the football field, mapping the trails, clearing trails, renovating the buildings, building new buildings and many more things!).

All of this work has been done by our hard working volunteers, we honestly can't do the work we do without your help and the support we receive from the many people in Projects Abroad offices around the world and the Government of Costa Rica. Thank you all for making 2010 so successful, we have beaten all of our expectations in every area and we are looking forward to doing the same again in 2011!