July has been a very interesting month for us here in Costa Rica. Months of planning, meetings, modifications and phone calls all to organise the work, accommodation and trips for our busiest month of the year!

In July we welcomed the 2 Week Special programme volunteers. We carefully planned these two important weeks to show our 2 week volunteers how exciting, beautiful and different Costa Rica is to what they are used to at home. This included trips to the cave formations, the Mirador viewpoint, the waterfall system as well as some very important work.

However, the first thing I would like to mention is our visit to the Bat cave (no reference to batman intended). Several of the Barra Honda caves are known world wide for the huge populations of bats that live in them. On several occasions in the past we have taken volunteers to these caves to try and catch and identify some of the species found within them, as well as give the volunteers a short but detailed explanation on the evolution of bats.

On both occasions we were lucky to catch two different species of bats in the net. I say lucky because we could only use a handheld net at the mouth of the cave and even considering the amount of bats that leave it was still difficult timing the swing to actually catch something. 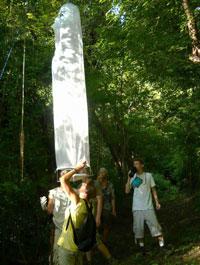 One of the jobs that we have been planning since the start of this year, in conjunction with the construction of the nursery garden, was reforesting areas along creeks and rivers. After many discussions outside of the park with local farmers and landowners we decided that we should start with two farms, one just down the road from us and another close to Oscar's house in "El Flor". We began the work of marking the sites in June, which was a long, hot job, but with so many more people in July the work was surprisingly easy. The work involved carrying the plants to the site, then splitting into two groups, some people digging the holes, some people carrying the plants to the holes, and some people putting the plants into the holes and marking them. We were pleased to complete the work in just under 4 hours, much less than we thought possible.

The reason why planting trees along rivers and creeks is so important, is because of the shade that the trees provide as well as the plants ability at binding the soil, both factors which help with water retention, something that is very important during the dry season when these creeks and rivers are vital for farmers and animals.

At the end of our busy weeks with these amazing groups of volunteers, we decided that a slightly easier day would be good. We organised a few hours work in the morning before taking the volunteers on the "Tempisque River Tour" Which was organised in conjunction with the Ministry of Environment and Energy (MINAE). We began both these days working with guides from Barra Honda and Mata Redonda National Park, the first time collecting rubbish along the Tempisque river bank and the second helping to do some maintenance work at a ranger outpost in Mata Redonda.

Both tasks were done with maximum energy and vigour like always and then we were able to slow down for 3 hours as we slowly drove along the Tempisque river, observing the iguanas, crocodiles, spoon-billed herons and many other beautiful specimens of wildlife as we returned to the Tempisque Bridge to be picked up again before heading back to the park. 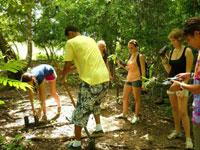 During July we also continued our investigations into the Park's Mammal and Butterfly populations. Our sensor cameras are still bringing in great results. In the last couple of months we have seen a change in the principal population which used to be the White-tailed deer and now appears to be the Central American Agouti, this suggests to us that with the rains, the deer are now moving around a different section of the park, so far we have not been able to find their new location, but assume it to be further down the side of the hills where the vegetation is fresher.

The butterfly inventory is still bringing in new results each time, we now have around about 20 species preserved for display in the park, these specimens are important for several reasons, firstly giving us solid evidence of what species we have in the park and also to help us show visitors to the park what they can see and what it is called.

Finally I would like to say to all the volunteers who visited us during July, a big thank you to all of you for your hard work, enthusiasm and for having such a great time with us. All the staff here in Costa Rica hope you will take something special back with you and visit us again some day!