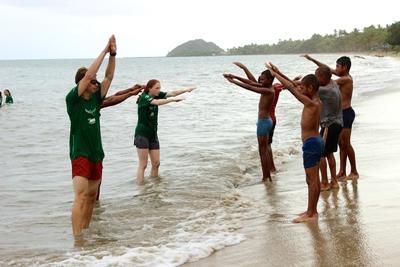 The last two months at the Shark Conservation Project has seen a lot of growth with new projects and hard work from our amazing volunteers. As the cyclone season drew to a close, we experienced heavy rains that cause flooding in many areas of Fiji. Despite some cancelled activities and survey dives, we still collected some excellent data from the Beqa Lagoon during dives and completed a lot of work in the mangrove nurseries.

The nurseries have been replenished with mangrove propagules, and work has continued towards making Uprising Beach Resort carbon neutral. The volunteers worked incredibly hard during the last two months Dirty Days and Community Days, cleaning up a lot of marine debris during beach clean ups, teaching local children of the importance of mangroves and sharks, and giving back to the local community where our work is completed.

Cultural days have allowed the volunteers to immerse themselves in the local culture and learn how to cook some traditional Fijian dishes. New research has commenced at Shark Reef Marine Reserve during shark dives, adding a new aspect for the volunteers on shark feed dives while they continue to be amazed by the beautiful sharks. New research has also commenced at Combe Reef assessing coral bleaching recovery for volunteer interns and Divemaster trainees.

With cyclone season drawing to a close the weather is hopefully now starting to improve in the Beqa Lagoon. Another choppy few months with a lot of rainfall, reduced visibility and unfortunately some cancelled dive days.

However when we have managed to dive we have seen some fantastic sights; White Tip Reef Sharks, Grey Reef Sharks, Bull Sharks and Tawny Nurse Sharks have all come to say hello. We have also had a few appearances from the somewhat elusive Sicklefin Lemon Shark and Silvertip Sharks, which has been fantastic for both our volunteers to see and for our survey data collection. In addition we have seen Napolean Wrasse, Hawksbill Turtles, Green Sea Turtles, Spotted Eagle Rays, Moray Eels and an enormous Narrow Barred Spanish Mackerel. 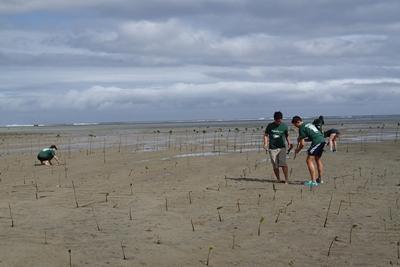 Our indicator species of Groupers, Snappers, Emperors, Mackerels & Tunas and Barracuda have been recorded in abundance on every dive.

Our Sunday Funday Fun Dives have continued to delight with our focus shifting to the smaller reef creatures. The past two months have seen sightings of the following nudibranchs; Blue Dragon, Loch’s Chromodoris, Pimpled Phyllidia, Swollen Phyllidia, Sea Blue Phyllidia, Oscellated Phyllidia, Bicolor Flabellina, Siboga Doprismatica and Lined Nembrotha. Additionally we have had a sighting of a new nudibranch, Hypseldoris maculosa. Flatworms, Guard Crabs, Shrimps and cleaning stations are also fun to see on these dives.

BRUV drops have been challenging due to the conditions, however we have managed to drop a number of times in both the Yanuca Control and Reserve areas and are hoping to finish the first phase of our data collection there in the next two months.

In the past two months we have also seen some of our volunteers develop into fantastic Divemasters, qualifying as entry level PADI dive professionals. A massive congratulations to Ryan Asselstine, Cristoph Hinse and Ian Yap for completing the challenging training. We wish you the best of luck in your future diving careers.

Projects Abroad has been invited to participate to a 2-year coral bleaching and reef resiliency study comparing Shark Reef Marine Reserve and a nearby control area. The lead scientist has been trained by Helen Sykes from Marine Ecology Consulting to perform ReefCheck and coral bleaching assessment transects. He will then train Projects Abroad Fiji Shark Conservation interns and Divemaster trainees to perform the assessment once a month until completion of the study.

The bull shark tagging project in Rewa river has officially started. The volunteers are now assisting miss Kerstin Glaus for her philosophy doctor research case and work along with the fisheries department of Fiji. No sharks have been caught so far but fishermen have been reporting catches in the area and brought two juvenile bull shark carcasses for further study and dissection.

Projects Abroad has been invited to participate to a 2-year coral bleaching and reef resiliency study comparing Shark Reef Marine Reserve and a nearby control area. The lead scientist has been trained by Helen Sykes from Marine Ecology Consulting to perform ReefCheck and coral bleaching assessment transects. He will then train Projects-Abroad Fiji Shark Conservation interns and Divemaster trainees to perform the assessment once a month until completion of the study.

Over the last two months much work has been completed with the Mangroves for Fiji project. The project has a few different aspects involved and this includes constructing nursery areas from bamboo and nylon mesh, recycling plastic bottles by cutting them in half and making holes in the underside, filling bottles with substrate, collecting propagules, planting propagules in pots, watering propagules, weeding pots, replacing dead propagules for live ones, and planting established propagules into the wild.

The outcome of all this work has various benefits and by taking part in mangrove afforestation volunteers are indirectly responsible for;

During the months of March and April, Projects Abroad (PA) volunteers and staff continued to plant propagules in mangrove nurseries allowing them to establish a root system and therefore increase survival rate once planted into the wild. PA volunteers and staff have recently reconstructed the nursery at Vunibau village that was recently destroyed during the cyclone. 800 propagules were planted in this nursery. 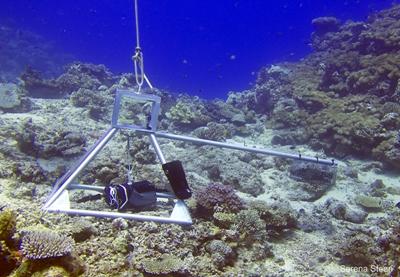 The development of the mangrove curriculum to be implemented into local schools is still in progress. The curriculum has been structured in such a way that mangrove education is broken down into four lessons to be taught over a two month period for a particular age group.

There are also plans of a nursery to be built at Pacific Harbour Multi Cultural School; we are awaiting bamboo to be provided by the school to build the structures. Another major achievement has been an agreement between Uprising Beach Resort and Mangroves for Fiji/Projects Abroad to make the resort carbon neutral. This project is ready to go ahead once the site of the nursery has been decided by Uprising Beach Resort management. While that is being discussed, PA staff and volunteers are in the process of building a mangrove display in the reception area of Uprising Beach Resort. 200 propagules will be on display; this shows tourists the ongoing relationship Uprising has with PA as well as a step forward to making the Resort carbon neutral.

Another month of work in our local communities. The month of March was a pretty hectic one after the devastating Cyclone Winston visited our shores. This did not dampen the spirits of Volunteers and staff of Projects Abroad. Still, we took out to two Primary Schools; Rampur Primary to assist them in cleaning and setting up the classrooms both in Kindergarten and Primary level. At Lomary Primary school, we assisted the teachers in creating teaching awareness topics of Shark Conservation and Mangroves.

The month was followed by beach cleanup at Galoa Village and ended the month with a cultural performance in the office where the volunteers were taught the local dances, how to prepare Fijian food and cooking it in the ‘Lovo’ (Earth Oven). It was interesting to see how motivated our volunteers have been this month!

Dirty Day was carried out at Rampur Kindergarten as the Minister for Education was due to open the newly built classrooms. Volunteers worked hard under the heat and rain to complete the flower gardens, paintings and cleaning of the classrooms and the surroundings of the new Kindergarten. Everyone enjoyed the day that ended with good food.

Volunteers and staff worked at Lomary Primary School doing construction work. Prior to this, there was a lot of preparations done and the school was re-building a bigger Kindergarten so Projects Abroad thought to take on the task of building a mini-playground for the students. A well deserved treat and help for the school as this was definitely something they were planning on doing for the students of Lomary. 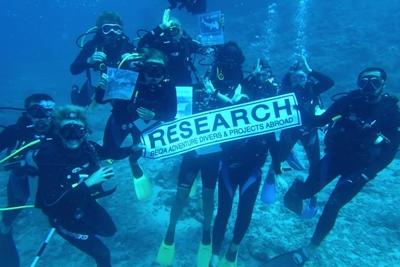 The Shark Dive continues to be a favourite for our volunteers. After the volunteers have completed their first shark dive, any subsequent shark dive they are tasked with identification of individual sharks and counting the number of individuals presesnt. This brings the volunteers closer to the animals and helps us determine which animals are there and when.

The Shark Reef Marine Reserve reef shark population assessment project has also begun. Pictures from volunteers are gathered and GoPros are set up on the reef to compile a bank of the reef shark individual. Software, used by the volunteers, will then compare those pictures together to tell individuals apart and estimate the population on the reef. Carole Boulidard, a French Projects-Abroad intern has been running tests and wrote software guidelines for future volunteers to follow. A minimum of one year worth of data collection is anticipated to be needed before any conclusion.