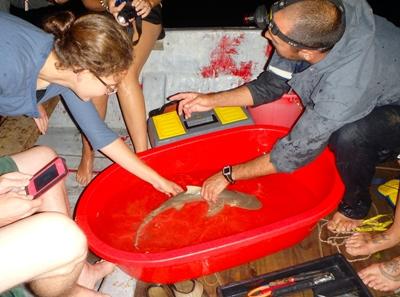 We are fast approaching our one year anniversary and what a year it has been. Having just been recognized as Projects Abroads’ most successful Conservation Project, the huge amount of work and dedication of everybody who has been involved has been recognized.

I would like to take this opportunity to thank all the staff who have worked tirelessly to make this project such a success and very much look forward to taking our commitment to shark conservation to the next level. 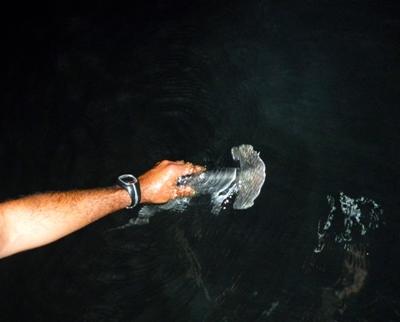 The last months have been some of the most difficult months for the tagging project.

Since the end of August we have not been able to catch any juvenile sharks. As expected the parturition time for three different species, Bull Shark (Carcharhinus leucas), Lemon Shark (Negaprion acutidens) and Scalloped Hammerhead Shark (Sphyrna lewini), has just started, making our tagging trips much more successful.

In the last week the volunteers have been able to catch, measure, and tag: one Eagle Ray (Aetobatus narinari), two juvenile Scalloped Hammerheads, and two juvenile Lemon Sharks. All four sharks were neonates (since the umbilical scar was open in all four cases).

In addition, our collaborators from the University of South Pacific (USP) captured and tagged a juvenile Bull Shark in the last week in the Rewa River close to Suva. The next challenge for the coming months is to catch neonate Bull Sharks in the Navua River. 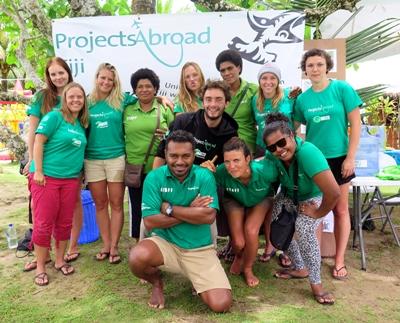 At the beginning of the month of October, with help from the students of Pacific Harbour Multi-Cultural School - a local school where one of our Mangrove Nursery is located, we replanted more than 2000 mangroves propagules along the Navua River, the site of our tagging project.

Further exciting news is that our neighbour, the Uprising Beach Resort - one of the premier resorts in Pacific Harbour, is joining our Mangrove Reforestation Project! Over the last few weeks our volunteers have been busy planting mangrove propagules in their nursery. The total number of mangroves planted is around 2500. This will be replanted in January with the help of their staff and visitors. They also want their staff and visitors to actively take part in Mangrove Reforestation, and to be educated on the importance of Sharks and Mangal Forest Conservation. 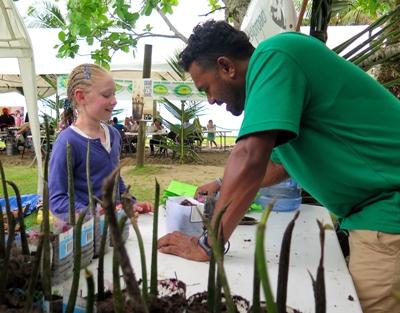 Another exciting event we attended was the Uprising Beach Resort Music Festival. The music festival was in aid of Mangrove reforestation. We set up a stall with the volunteers which aimed at promoting our project as well as asking people to plant a mangrove. We also gave information about the benefits of planting mangals, such as offsetting their carbon emission, increasing fish habitats, etc.

We also have Mangroves propagules nearly ready for replanting in our other 3 nursery’s. This will be planted around the month of January and February with local Fijian children. We have also incorporated a beach clean-up during our walk along the beach to gather mangrove propagules.

The trash collected is then sorted; we reuse the plastic bottles collected, and properly dispose of the other rubbish. We have also started minimizing our own rubbish, therefore ‘practicing what we preach’! 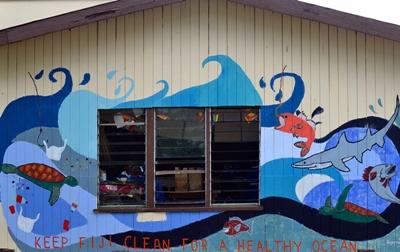 We have also been given an opportunity to go to a local school, Rampur Primary School, to conduct Community Education. Until recently it has been difficult to go to local schools because they have a tight schedule, and also school management are always cautious of people they let in to their classrooms. Our first time there was a resounding success and we were invited to come back anytime we want. Our volunteers educated the local school children about the importance of sharks, mangroves, and also about recycling. We also painted a mural on the wall of a classroom depicting a scene showing a healthy and an unhealthy marine environment.

We also have conducted numerous educational activities with local villagers around Pacific Harbour which has boosted our profile and signal to the local community that we are serious about our work, and that we are here to stay. We look forward to the exciting times ahead and from Fiji I would like to wish you all a ‘Merry Christmas and a Prosperous New Year!’ 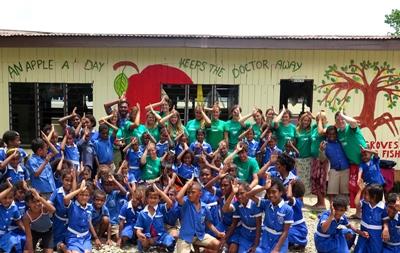 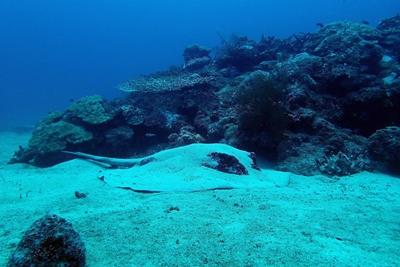 Survey dives continue to be a great success! We were able to carry out a total of 64 survey dives during this time period, not counting the dives we conducted which could not be used as survey data due to various reasons. During this time we recorded 124 sharks, of which 100 were White Tip Reef Sharks (Triaenodon obesus), 16 rays and 42 turtles. The excitement of this month was seeing a marbled stingray on a survey dive which had never been observed in this area before.

Fish data was also recorded on every dive on the Fiji Fish Manuals (which were created on this project) and has proven to be valuable in the process of learning the fish species for all volunteers. New Survey Dive Manuals containing the dive briefing and the various roles that volunteers are given during each trip are provided to volunteers during the survey workshop, which has shown to be of great help.

Due to weather conditions we are subjected to in the wet season, we had to cancel a few survey dives. However we were lucky enough to be able to reschedule these dives during different times in the week. During rough conditions we generally still make it out to Shark Reef Marine Reserve where there is a higher chance of seeing sharks, especially Grey Reef Nurse Sharks (Ginglymostoma Cirratum) and Bull Sharks (Carcharhinus leucas) thus is a great option for these times.

We are eager to continue survey the Beqa Lagoon and look forward to what we will find next month. 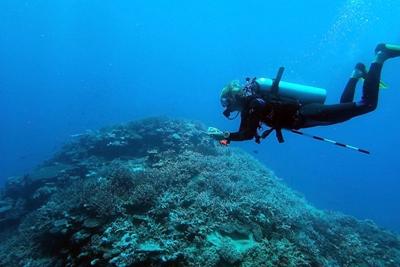 We have made a terrific and exciting discovery! A Sub-adult Tiger Shark (Galeocerdo cuvier) on our BRUV in late November looked familiar to a Tiger Shark we observed in prior BRUV’s… so the staff looked in it. We examined the sharks’ tiger-like stripes (unique like finger-prints) and found out that it was the same shark in July, September and November! This beautiful 2.5+ meter female accounts for three of the five total Tiger Shark sightings on our BRUV in the BRUV projects 10 month history.

This shows residency to Beqa Lagoon and site fidelity to Yanuca MPA. The Tiger Shark has been observed twice in Yanuca MPA and once in our Small Reserve behind Beqa Island, only 20 kilometers away.

Tiger Sharks of similar size (250-300cm) have been satellite tagged and tracked in the Caribbean. These individuals all traveled over 3,500 kilometers from South Florida to the Caribbean to Bermuda and back to South Florida, annually. The behavior of this specific Tiger Shark in Beqa Lagoon is quite the opposite. In a four month period she must have stayed in the vicinity of Beqa Lagoon; it would be impossible to complete a trans-oceanic voyage in that time. 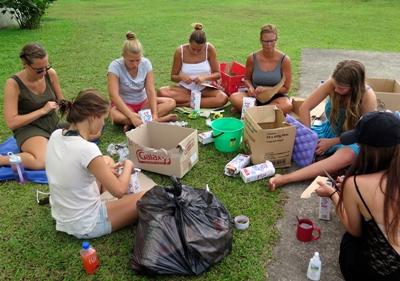 Other than the excitement of the Tiger Shark, October and November were tough months for dropping BRUV’s due to foul weather. Conditions improved slightly in November but we still struggle to drop 4 BRUV’s every week (1 per survey dive trip).

We look forward to the summer season, as it usually results in rainy, but calmer weather. In addition to the Tiger Shark, the BRUV captured Grey Reef, White Tip and Lemon Sharks! We hope to see more sharks, rays, turtles and indicator fish species in the coming months; especially our special resident Tiger Shark! 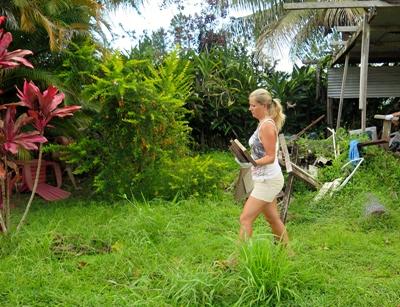 Fiji has great marine life, as well as an astonishing landscape. However the nature is threatened by the growing pollution. Rising consumption leads to growing waste and the need of a better national garbage system. Some people are throwing their garbage directly into the oceans. Fish and other sea animals are consuming the rubbish and it is killing them off.

As an environmental and conservation group we try to raise awareness and find alternative solutions to managing our garbage. We have already started to buy all the empty plastic bottles from the villages for our mangrove project, however we have now found another project to work on – building bricks out of rubbish. 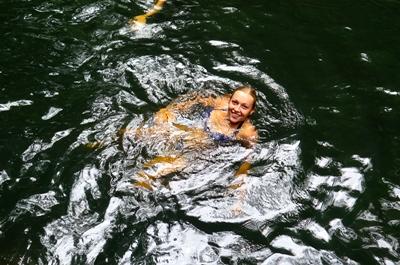 While enjoying the Fiji-sun, all the volunteers from the Projects Abroad conservation group sat around stuffing milk cartons with their rubbish (including plastics and other paper materials). After three hours everyone had contributed with one brick each, and the most efficient – two bricks. There’s no denying that building bricks from rubbish is time consuming work, but it is highly environmentally friendly.

It is incredible how much rubbish you are able to stuff into one milk carton! All the pizza cartons from Saturday’s dinner, as well as other plastic and paper materials, had been turned into something useful.

Our plan is to use the bricks to build retaining walls for our veggie garden and our compost box. However there are many other things you can do with these bricks. If you wish to build bricks but are not a fan of milk – despair not; it is also possible to use plastic bottles instead of milk cartons! This was done in Lake Atitlan in Guatemala, where they built schools and homes out of the bricks.

In Ecuador they built three small food outlets. An ecological day was organized where the schools, colleges and government could come to learn. A competition encouraged everyone to bring bottles and clean up their neighborhood. This event showed how this fantastic practical low cost solution can turn rubbish into a resource. One day we might be living in houses made of milk cartons ourselves... 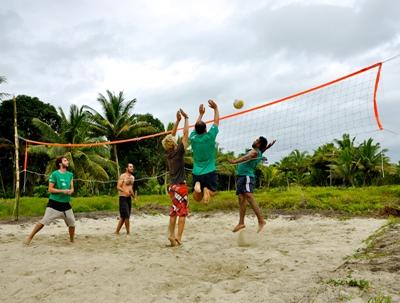 At the Project we produce a lot of food waste from all of the wonderful fruits and vegetables on offer. So as the aware conservationist we are; a number of the girls rolled up their sleeves and built a compost box out of scrap pieces of wood. The project is producing its own compost but what now? What are they going to do with it? WELL! In only one day the volunteers completely cleared a field of weeds and angry shrubbery to create 6 beautiful garden beds now full of beans, pumpkins, capsicum, cucumber, carrots, watermelon, pineapples and a banana tree!

To celebrate the end of a successful week of work the volunteers helped prepare a delicious Lovo feast and share Kava. On the weekends they enjoy all the fun activities Fiji has to offer like; shark diving, hiking, white water rafting, skydiving, beach going and of course Volunteers vs Staff Volleyball games and more.