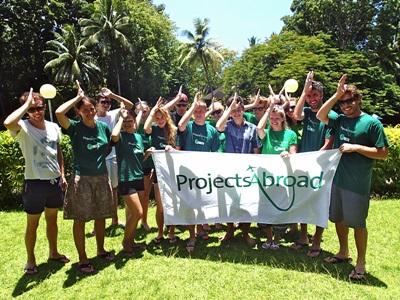 March and April heralded another leap forward in the Fiji Shark Conservation’s success. As this new project continues to get tweaked and improved, we have added value to the volunteers’ experience by concentrating on volunteer education and utilising their individual skill sets to carry out tasks and activities. The monthly schedule now falls into a strict structure so we are able to plan out weekly activities in advance to ensure we maximise the impact of our local and global shark conservation and research initiatives.

Our public profile has been raised locally with interest being shown from the University of South Pacific and various government departments, as well as from other NGOs operating in Fiji. We have expanded our village and local school base, introducing our community outreach, education and awareness work further afield and testing out our models before further expansion.

All our projects grew in strength and structure, as will be shown in the individual reports below. We also welcomed Kira (Hilde) as our new Marine Biologist and Dive Instructor, who is already proving a valuable addition to the team. Finally, the design for our new Shark Conservation T-shirts was finished and the t-shirts printed, which the volunteers are wearing with pride.

The team made some invaluable and important contacts over the past two months, including the IUCN, The Wildlife Conservation Society, REDD Committee and Ministry of Fisheries. Our media presence was impressive, with Nat Geo expressing interest in filming our work and we featured heavily in an episode of the documentary Shark Man, due to be aired in the Autumn. Professional shark photographer, Sam Cahir gave a presentation to the volunteers about his work, as did Ian Campbell of the WWF.

Dr Demian Chapman, Mark Bond and researchers conducting ‘A Study of Shark Ecology and Movement Patterns in Fiji’ Expedition visited our project and we updated them on our progress so far with their research. We also became officially partnered with the WWF Global Shark Programme and Coca-Cola South Pacific have agreed to sponsor our recycling project including taking the model out to all South Pacific Countries. 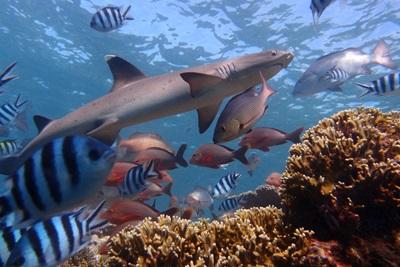 During the past two months, the volunteers accompanied our Shark Biologist to the Navua River on a total of 30 trips at dawn and dusk and also in line with the high tide. We caught a total of two juvenile sharks, one male and one female, both were tagged, DNA samples and measurements taken. We also started our Local Ecological Knowledge Survey in the local villages to find out what they know about sharks in their rivers.

The volunteers observed as our marine biologists dropped and retrieved 24 BRUVs over March and April. Once the data was uploaded, the volunteers watch hours of footage, collecting and recording data. The most exciting video was on 30th March, where the volunteers recorded five Grey Reef Shark and one Whitetip Shark come to the bait cage, as well as many other species. The sharks stayed around the camera the entire time it was in the water, bumping the cage continuously.

Other videos have captured on film Whitetips, Blacktips, Giant Trevally, Lemon Sharks, Grey Reef Sharks, Nurse Sharks, barracuda, turtles, moray eels, snappers and giant travelly. We are accruing a relative abundance of shark and other species and density in Beqa Lagoon that we would not have been able to achieve only by diving.

Our Shark Sighting surveys are going well, as we record seeing sharks on 50% of our survey dives. We have already been able to analyse some data which is showing that divers see a great diversity of sharks on Shark Reef which is a Marine Protected Area, compared to outside the protected zone. Sharks seen by our survey divers over the past two months include, Bull Sharks, Grey Reefs, Whitetips, Blacktips, Silvertips, Tawny Nurse Sharks and even a Lemon Shark.

We will be introducing indicator species into the count to get data on biodiversity and reef health.

There has been ‘Mangrove Madness’ over the past couple of months as the volunteers and staff worked tirelessly to collect, grow and planted over 7000 mangrove propagules in a local village, where they also built a nursery so the villagers can continue to reforest their mangals.

Using plastic bottles as our mangrove propagule planters, we pay local villagers to bring us their bottles. We received over 30,000 bottles already and counting! This incentive also puts money into the local village directly. Our bottle recycling showed a quarter of all bottles are from Coca-Cola, who have now agreed to sponsor our recycling work.

Community education is one of the most important parts of our work. We take our Shark Awareness activities into the local villages, schools and groups, giving them the information they need to help us all protect the sharks, reefs, mangroves and vital habitats. The volunteers took our traveling puppet show, Shark Stanley and Friends on the road, performing several times to elated audiences around Pacific Harbour and in Nadi.

Each month the volunteers go into the community and complete a one day task that benefits the local people. In March, following severe flooding, the volunteers visited Calia Village where homes were destroyed and helped to dig drainage ditches. They also took basic food supplies so that the families were able to sustain themselves during this tragic event.