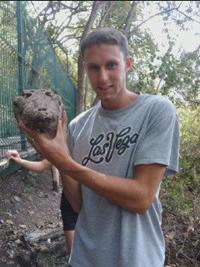 Once again we are coming to that point in the year when we have to start to get all our equipment ready in order to maximize the results we obtain from the nest collection in the high season. The equipment must be ready to meet the adverse conditions and in order to do this a total check up is in order.

The amount of turtles laying their eggs at the moment is low compared to the high season (98 nests were collected in total during February), but we are still conducting the morning patrols in order to work out the number of specimens that come out to nest during the low season months. We are also still releasing numerous hatchlings daily from the 119 nests collected during January this year. 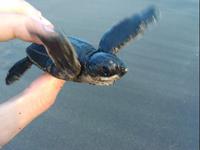 As there are still cold fronts coming from the north, there is still a good chance of spotting a Leatherback, the largest and one of the rarest of the sea turtle species.

We are also working on the maintenance of all our structures at the camp, to make sure everything is ready for the busy summer period. We are constantly trying to improve the comfort and facilities at the camp, but living on a beach, will always be basic, but we hope the beautiful environment more than makes up for cool sea showers!

In the past couple of months we have had the opportunity to collect the corpse of an adult crocodile which will be kept and preserved in the museum area of the crocodile farm. The crocodile was killed by another over a territory dispute. These creatures are extremely territorial and when a new male enters an already occupied area, there exists a huge chance that a fight takes place. 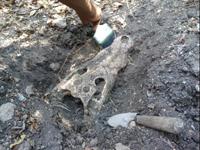 Unfortunately the outcome of this particular fight was a dead crocodile that we believe was over 5 years old, and over 5 meters in length. In the last week we have been able to start to collect the bones of the reptile in order to reassemble it in the museum area, it has been a very interesting job, and to establish the cause of death from the teeth marks left in the bones, we had to go all C.S.I. Tecoman!

As the Easter holiday season is at hand, the local cooperative society of the El Chupadero Lagoon, is starting to develop several activities focused on the development of environmentally friendly activities in the lagoon for tourists. Their programs vary from guided boat trips to far areas of the lagoon to renting small recreational boats. This is aimed at creating an income to the local community.