Entering in a boat into a lagoon that is infested of crocodiles in the middle of the night sounds a lot like what the regular folk would call their "worst nightmare", but once or twice a year, just before the crocodile mating season start by the dark given by a new moon, we take the duty of monitoring the local population that inhabits the lagoon that surrounds the crocodile farm. 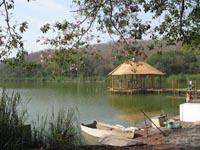 Armed only with paddles a notebook and our torches, we entered the lagoon just as the sun goes down, the whole idea is kind of surreal as you enter and start spotting the bright eyes from the crocodiles reflecting your own light. We take this task to estimate the population, this time the crocodiles were not really cooperative and we could only count around 18, in statistics, you take this number and you multiply it per 10 according to a table, this gives you an approximate of the number of specimens that live in the area, we also could collect three 1 year old crocodiles that were living on their own in the lagoon, it is quite complicated to remove them from the lagoon. As we know, one of the main goals of the project itself is to reintroduce crocodiles into the wild, but since the area where this little ones are is rather small and the local population is way more developed than them, their chances of survival get reduced dramatically, it was imperative to take them to a controlled area where once surpassing a quarantine, will be introduced to a population of their same size where they will be fed regularly increasing their chances for development and survival exponentially.

The infrastructure development in the project is reaching the final stages, and is due to be on total operation by the beginning of April; the area is due to become one of the most important eco tourist developments in the state and we are really proud of the work we engage there and to be a part of it.

The Turtle Camp at the moment is in constant movement, as we have to have everything ready before the rains come giving the mark for the beginning of the high season, the patrols are still constant, and the quantity of nests we collect is significant one, if you take notice that this kind of data is not "officially" collected anywhere else, the 120 nests we collected in January create a data that is of high importance. Nevertheless the work in camp is still hard and repairing nets, giving maintenance to our incubation areas, painting and fixing is as important as the work we engage at night, this type of tasks are the ones that will definitely make a difference when the high numbers of turtles start to come out.