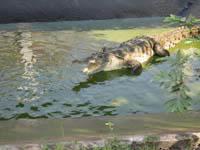 Regarding conservation activities, one can just simply carry on and on and sometimes feel that all the effort that is put in is useless, as often the problems to a certain extent still remain. It is sometimes in these situations that you have to look at what you do in a retrospective way.

It has been almost 4 years since we started supporting the Biological Station in Tecoman, 4 years of activities that have had a great impact in the area. Projects Abroad has had a radical influence in all the projects that have been developing lately in the area and we can proudly say that we are really been taking seriously by all the authorities at all levels.

The projects that we support and manage, including both turtle conservation and crocodile conservation have turned out very successfully, and the numbers of turtles we have released into the sea has increased yearly by over 15%. The crocodile farm that we support has had major renewals, the study we have been carrying out in our lagoon has lead to a major development that will help to protect the lagoon as a sustainable eco-tourist centre.

It is when you look back on what we have achieved that you are encouraged to carry on, find more interesting and worthwhile projects to support and realise that there is nothing that cannot be done.

The dramatic changes that have been taking place in the crocodile farm like the new museum area, and all the new building improvements have been taking their toll on the little crocodiles. The amount of noise from the workers and the constant visitors have increased the levels of stress in the young crocs and diseases such as eye infections have increased. We want to reduce these negative effects on the young crocodiles as much as possible. Here, the volunteer's involvement is crucial; in the nursing area over 120 little crocodiles have been monitored constantly giving the little ones marks in order to have a more accurate control over their population, and in some cases to be more sure of the ones that sadly couldn't make it. This control that we are now implementing allows us to see which crocodiles we are curing for eye infections and to see how well their recovery is going. It also lets us know which are the offspring that will happily move to a bigger environment.

The building of more pools at the crocodile farm has been delayed by budget issues, so we have implemented a temporary solution by dividing one of the big pools in two. We now have two big pools to hold only 1 and 2 year old crocodiles, the 27 little crocodiles that remain from the 2007 offspring. These smaller crocodiles are now over a meter long, most of them are in great condition, so it's now time to place them in the next pool to allow the 2008 offspring to enter a bigger area and continue with their growth as space is a critical factor in the crocodile's growth development.

It won't be long before we can release our 2007 offspring into the wild and it will be sad to see them leave, but once again, this is why we focus all our efforts on this conservation work.