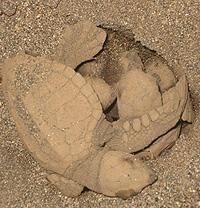 The peak of the high season is here and the volunteers are having great fun experiencing it! Throughout the month the number of nests collected per night has been increasing and on average we are finding 20 nests a night. Recently, however, we have had the perfect weather for turtles, which is strong southerly winds, and have collected a record for this season of 96 nests in one night. That's 9747 turtle eggs that we are protecting from poachers, animals and bad weather! 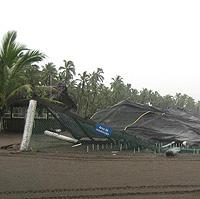 The weather that is perfect for turtles has, however, been bad for our Corral as we woke up one morning to find that the entire corral had collapsed! Our plans for the day totally changed to deal with this, which including removing all of the damaged materials in the pouring rain so that we could bury the eggs that we had found during the night. Plans to rebuild are now underway to protect all of the 700 nests that are currently buried there.

This month's group of volunteers included another two week group who took Spanish lessons and aided our conservation efforts here. One of the Spanish lessons was suspended this month as an Olive Ridley turtle (Lepidochelys olivacea) came up in the mid-afternoon to lay her eggs in the sand just outside the classroom. It was a great moment for everyone as they could all clearly see her digging the nest with her back flippers and then laying the eggs before covering them back up again and returning to the sea. This process normally takes around 30 minutes at night, and when volunteers on patrol are lucky enough to see this, the turtle is normally lit by the lights of the quad-bike. 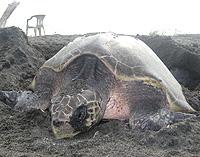 We patrol our 24km stretch of beach throughout the night for one main reason: to collect turtle nests before poachers do. It has always been a struggle to get to the eggs before the poachers but this month we were reinforced with the presence of the Federal police. By accompanying us they hoped to catch the culprits red-handed and I am very pleased to report that they have already captured two poachers. With a continued police presence we hope to deter the poachers to the point where they abandon the beach and whilst they might move elsewhere to hunt the turtles it is unlikely as the majority are locals. Ideally, should the poachers leave, then our work will become easier and all-night patrols will become a thing of the past replaced by an early morning sweep of the beach to collect the eggs laid the night before. 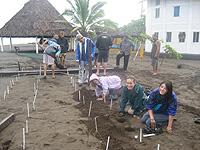 The volunteers have also been helping to clean the beaches, making it safer for turtles to come ashore to lay their eggs. All the volunteers have been very surprised at the amount of rubbish they have collected, and now enjoying walking along a clean stretch of beach.

Due to the diligence of all the volunteers over the past month, we have been able to see some very exciting creatures at the 'El Chupadero' lagoon. They include a white-faced coati, a mother and her three babies, as well as an armadillo and more green iguanas. We also saw and identified many new species of birds; Spotted sandpiper (Actitis macularia), Solitary sandpiper (Tringa solitaria), Spot-breasted oriole (Icterus pectoarlis), Pale-billed woodpecker (Campephilus guatemalensis) and Purple gallinule (Porphyrula martinica).

At the crocodile farm, we had our last opportunity to collect nests before they started hatching. Crocodile eggs have to be transported very carefully because should their orientation be changed then the embryo will come away from the egg wall and increase the probability that the egg will not hatch. This makes the collection process very delicate but the volunteers handled the extra responsibility very well. The volunteers have also been able to mark and measure all of the baby crocodiles that have been hatching from our nests in our artificial beach, greatly increasing the young population of (Crocodylus acutus) and (Crocodylus moreletti).