The rains have started to fall bringing much needed relief and rejuvenation to the forest. This signals a time of plenty as trees start to produce fruits and animals give birth to coincide with the availability of more food. Longer days and cooler temperatures mean that whole jungle seems more alive and it is a great time to experience the Amazon and its diversity of wildlife. With such an explosion of activity it is no surprise that we have captured some spectacular footage on our motion sensor cameras. Animals that we have not seen for a long time and even a new species for the reserve. Elsewhere, the birth of hundreds of baby turtles and the release of many animals back into the wild has made the last few weeks truly memorable. 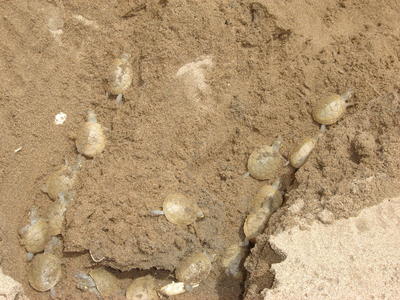 Running such a large animal rescue centre requires a lot of time, money, dedication and physical labour. Every day all the residents must be fed; cages cleaned; pools drained and re-filled and medicines applied where necessary. There are no weekends, holidays or days off. Every animal has different needs and personalities and it is a huge responsibility that we have undertaken to protect and care for these defenceless creatures. Often taken from the jungle as babies, having lost their mothers to poachers, we have to teach them not only to fend for themselves but also how to survive back in the wild. However, all this effort is rewarded when the doors are opened and we can return them back to where they belong.

Over 2 days last month we undertook the largest release of our 16 year history. In total we released 21 animals back into the wild to live the rest of their lives free and safe in our large reserve. Government officials attended the release along with film crews and representatives of Animal Defenders International. The satisfaction from watching the animals disappear off into the dense jungle is indescribable and the culmination of years of hard work. 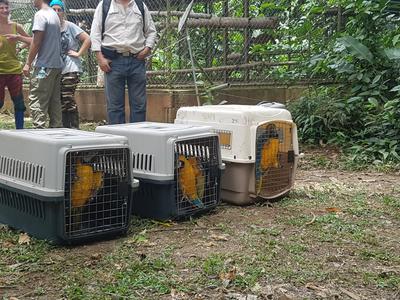 The group of spider monkeys form part of our ongoing reintroduction project and represent the fifth group to be successfully released in the reserve. Locally extinct due to hunting these magnificent primates are now back in the area and our project that has been operating since 2011 means that we have now have a wild population established in the reserve with five wild births recorded to date.

This new group contains four females, two males and a new-born baby and our hope is that they will develop a home range in a different area of the reserve. They will naturally come across the other released monkeys but our hope is that they will remain a separate group in a different part of the reserve. The long term goal is to establish different populations in different areas that will only interact when the groups come across each other or when young males leave in search of females. This is what happens in the areas where they are still found in the wild and we want to do our best to replicate this scenario. Now we must monitor this latest group for at least 3 months to assess how they are adapting and that they are eating well. Each individual has its own radio collar with a different frequency so we can track them if they become separated. However, early signs are encouraging as they have remained to together and appear to be foraging enough food. 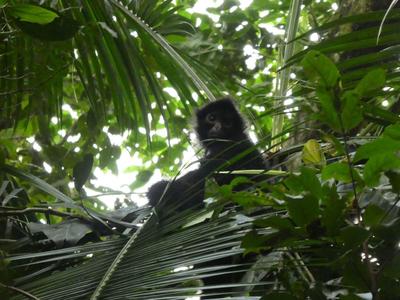 After the arduous task of collecting the precious nests of the local side-necked turtle (Podocnemis unifilis) the second phase of the project requires patience. On average the turtle eggs hatch in a period of 75-90 days but during that time we must continually monitor the artificial beaches for the presence of mole crickets, ants and parasitic wasps. All of these are voracious predators of turtle eggs and will consume a whole nest in a matter of days. Tell-tale burrows in the beach advertise their presence and we must quickly remove them before any damage can be done.

Once the babies actually begin to hatch they are all individually removed from the beach and placed in communal pools. Each one is dutifully measured and weighed before being marked with a small cut on their shells. Every year we select a different area on the shell so that when we see the adult turtles in the wild we can identify the year they were born and released.

It has become tradition to release all the babies on 5th November to coincide with the anniversary of Taricaya. To date we have over 700 baby turtles awaiting release but there are still more nests to hatch so I will update you on our final total next month after the mass release back on the beach where they were collected. 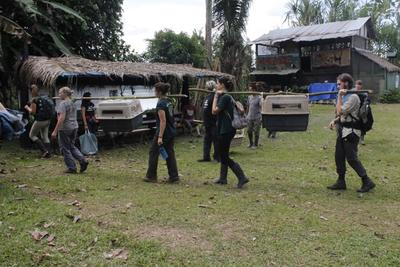 I seem to be talking about this project a lot in recent updates but the truth is that this un-intrusive monitoring technique enables us to study and film some of the forest´s most secretive and elusive residents. All wild animals will sense our presence long before we can detect theirs, especially nocturnal ones as flashlights are a necessity for walking in the forest at night. However, the motion-triggered cameras function with infra-red beams and the wildlife is unaffected day or night.

I mentioned some great sightings last month but the surprises have continued to arrive including a new bird species for the reserve. With the recording of a great jacamar (Jacamerops aureus) on video our bird list now totals 497 species- a breath-taking number which is edging ever closer to the magical 500 mark. Whilst this new species is fantastic I was equally thrilled to catch on film the blue-throated piping guan (Pipile cumanensis). This large turkey-like bird was spotted from the canopy walkway over 10 years ago and we were beginning to wonder if it had just been a random sighting of an individual passing through. Such a large bird should be easily seen but nothing for over a decade. Then, last week, a crystal clear video of an individual feeding at one of our clay licks. Often found on forest edges the presence of this bird deep in the reserve and at one of the clay licks (colpas) suggests a knowledge of the area. These colpas are few and far between and often well-hidden so for the individual to be recorded where it was implies that it is a resident in the area.

Finally one of our trail cameras recorded one of the jungle´s most secretive residents- a jaguarundi (Puma yaguoaroundi). This slender black cat is incredibly difficult to see. It is small, timid and, due to competition from larger cats, found in low densities in wide-ranging territories. It was our first recording in many years and another bonus for our mammal research.

Elsewhere at Taricaya we have been remodelling one of our common areas into a small museum with information on our different projects; roofs have been painted to provide extra protection from the upcoming wet season and almost all of our trails have been remarked and mapped. Next time I will bring you news on the annual turtle release, the progress of our newly-freed spider monkeys and much more…