With the arrival of our busy season volunteers congregated from all over the world to participate in our many projects deep in the Peruvian Amazon. It is a great time of year to be in the jungle as the rivers drop and huge beaches appear welcoming annual migrant birds such as storks and skimmers. The turtles haul themselves up on to the beaches to lay their precious eggs and animals become more active as they wander the forest in search of food as the dry season takes its toll. With so many helping hands and visits from old friends it has been a very successful couple of months and plenty to report on…. 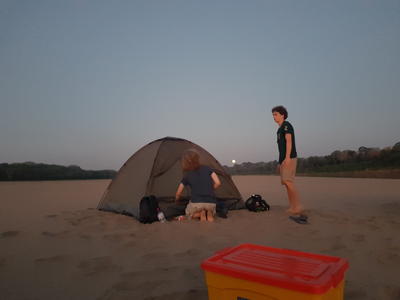 Fortunately our annual busy season coincides with the collection phase of our long-running turtle project. The freshwater side-necked species- Podocnemis unifilis- is resident in lakes and rivers throughout the Amazon basin but poaching of their nests for the sale of eggs has had devastating effects on the population numbers. Since 2005 we have been operating an annual initiative to protect all the nests laid on a riverine island called Playa Alta. The Peruvian government grants us custody of the island and allows us to remove all the nests we find and bring them back to the safety of artificial beaches at Taricaya. Straightforward as this sounds, it is actually 6 weeks of incredibly difficult work, spending every night on the beach downriver searching for nests before poachers can get to them. Even though our project is well established the high price of turtle eggs in local markets makes them a good source of income, albeit illegal, and we must maintain a strong presence on the island to deter intruders.

Thanks to a huge effort from staff and volunteers alike, this year we have surpassed our results from last year as we collected 46 nests totalling 1182 eggs. Female turtles will always return to the beach where they hatched to lay their eggs and the fact that we are slowly seeing an increase in the number of nests we collect is almost certainly a result of our released babies returning after many years when they are at a reproductive age. It is also a testament to the fact that every year we take the hundreds of babies back to the beach for release. If we just let them go at Taricaya they would never get the necessary imprinting and information to be able to return to lay eggs of their own.

The eggs will now be safe in our artificial beaches as they complete their incubation period of 75-90 days. They will be released together on 5th November- the 16th anniversary of the Taricaya Reseacrh Centre! 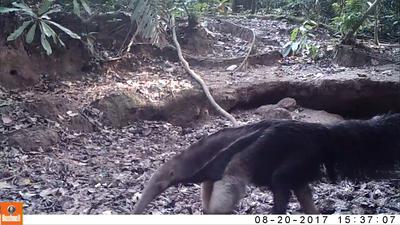 The scarcity of food as the dry season continues means that the animals of the forest are forced to eat whatever they can find and this often includes fruits and nuts that are unripe and rich in toxins. Such a diet increases their dependence on our colpas. As I mentioned last month these clay licks are essential in helping animals remove the poisons from their digestive systems and so become very busy this time of year. As more animals arrive to feed on the mineral rich clay more predators arrive to hunt! Our cameras have been quietly recording all this increased activity and we have had some amazing sightings caught on film. Last month I gave special mention to some of the most spectacular animals of the jungle. Jaguars, tapirs, pumas and ocelots to name but a few. This month we have caught more of the same on film but have had rare and exciting footage of some of the more elusive residents of the forest.

It has been close to 10 years since our last camera recording of one of the most bizarre and rare animals in the jungle. The giant anteater (Myrmecophaga tridactyla) is uniquely evolved with huge claws for ripping apart ant and termite nests and a fused jaw with a long sticky tongue capable of catching hundreds of ants at a time. Whilst a big animal it is hardly ever seen and has huge territories making them nomadic by nature. Hence our surprise when we caught one on film wandering through the colpa. Anteaters do not need to feed on the clay as they get all their dietary needs from the ants and termites they feed on so this was just a chance encounter but a breathtaking one nonetheless.

The second animal I wish to mention is marginally less spectacular to look at but just as exciting. The margay (Leopardus wiedii) is a small spotted cat with a long tail used for balance. These cats are generally arboreal and nocturnal, hunting and moving around the trees by night. We have even seen one up our huge canopy platform tree many years ago at a height of about 40 metres above the ground. Again, imagine our surprise to catch one on film walking along the ground in the middle of the day. Amazing! 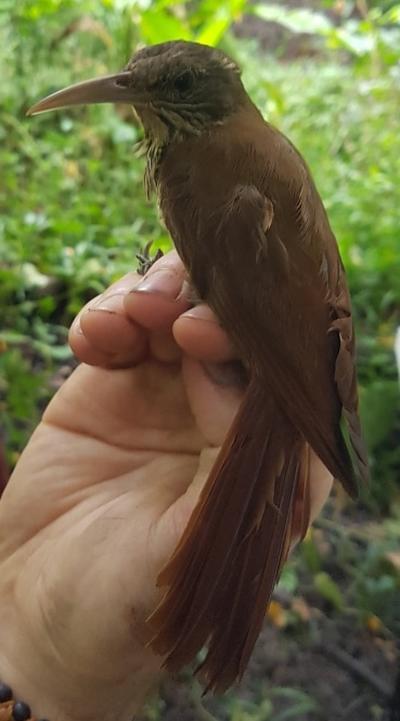 It seems only yesterday I was wondering if we would ever reach the target of 476 species of bird in the reserve, an arbitrary number which meant we had one species per hectare. However, our ongoing research continues to amaze and with the help of one of our oldest standing researchers, Mauricio Ugarte, we have yet more new species to report. Whilst out with volunteers teaching them playback techniques he heard and successfully called in a small flycatcher previously unrecorded for the reserve. The Yellow-crowned Tyrannulet (Tyrannulus elatus) is very inconspicuous to look at and blends in well with the thick secondary growth it inhabits but its call is very distinguishable. A confirmed register as the bird continually called back and came closer flitting through the understorey.

The second new species was caught in mist nets very close to the main camp. We were banding birds and continuing to build our database of biometric data and population dynamics when a feisty woodcreeper flew in and surprised us. We have 17 species of woodcreeper registered at Taricaya and bar a couple of exceptions they can only be differentiated when in the hand. Their tendency to fly in mixed species flocks and dull colouring coupled with similar calls makes identification in the wild very difficult. That said after 15 years of research we thought we had identified all the woodcreepers in the reserve. We missed one! The Lineated Woodcreeper (Lepidocolaptes albolineatus) is the latest addition to our list and brings the total number of bird species found in Taricaya to a staggering 497! 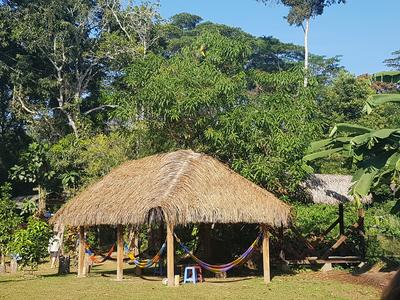 Elsewhere at Taricaya we finished the new hammock area with a cool leaf roof to protect everyone from the burning tropical sun. The new walkway linking all the bungalows and common areas was finished and the roof for the water purification tanks was replaced. It has been an extremely productive couple of months and I look forward to updating you all further as we continue to work in conserving the richest ecosystem on the planet. Over the coming months we are preparing our next group of Peruvian spider monkeys (Ateles chamek) for release and, of course, our baby turtles will start to hatch…until then!