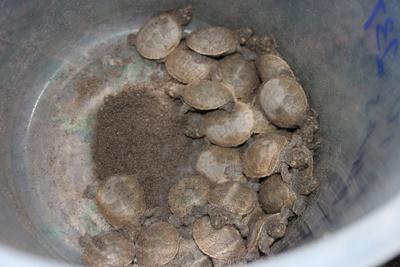 What a busy few weeks it has been here at Taricaya. As the long dry season continues to stretch out it has enabled us to achieve a huge amount before the expected onslaught of the rains in the coming weeks. Our turtle eggs have begun to hatch; we completed a new suspension bridge over the creek, discovered several new species of bird for the reserve, put our bears together and received some new arrivals at the rescue centre.

At the conclusion of the collection phase of the turtle project we had been able to rescue 40 nests and close to 1100 eggs. This is a tremendous effort from everybody involved and the result of hundreds of hours patrolling the river island beaches every night for two months. Well done to everybody who helped!

Over the last few weeks we have been waiting for our first nests, collected in July, to hatch and finally, almost exactly 60 days later, our first baby turtles started to emerge. We must now check the artificial beach daily to remove any new born babies to safety in small pools and leave space for those yet to hatch. Then, we must mark every baby turtle with a small notch in its shell whose location will reflect its year of birth and release. Then biometric data will be collected- length, weight, shell height etc..before our annual release date on 5th November. 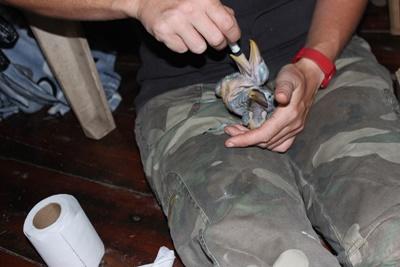 Traditionally it is unusual to get many new arrivals in the rescue centre at this time of year as low river levels mean that many areas of the rainforest are inaccessible by boat and activities such as logging and brazil nut collection are halted until the rains come. Less people in the forest means less illegal hunting and so fewer orphans! However, I suspect that the easy access now provided by the many new roads and tracks in the area mean that animals will get little respite as humans spread further afield and this year we have had a continual influx of animals.

In the last eight weeks we have received: 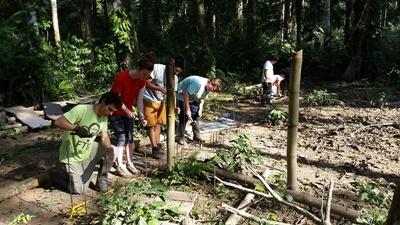 Almost all of the arrivals were babies recovered from dead mothers shot for food, or nestlings taken from felled trees. The aracaris and parakeets were so young that they did not even have feathers but constant attention and feeding every 2 hours with mushed fruit in syringes means that not a single one has died. A fantastic reflection on all the staff and volunteers who work daily in the centre and it will be immensely satisfying seeing all of the above animals released back into the wild as soon as possible.

After several months of rest and relaxation getting used to being back in the jungle and learning to be bears again it was time to open the internal gate and let Sabina and Lucho interact with each other, being with their own kind for the first time since being snatched from their mothers as cubs.

We had studied their behaviour for months and watched them interact but always with the safe protection of a steel fence. Was it a risk? Slightly, but our research suggested that there would not be violence and at worst they could each retreat to their own cages. Nevertheless we were ready with sleeping darts and long sticks should we need to intervene. It was a huge moment and one that everybody wanted to be a part of.

The results were complete and utter indifference from both bears to begin with as they deliberately ignored each other for the first few days. We were beginning to think that maybe they would never hit it off and then early one morning I crept towards their enclosures to see them sitting together in the early morning mist, chewing on plant shoots and chatting away in their curious language of coos and clicks. It seems they prefer peace and quiet and now I am not in the least bit worried if I see them together during the heat of the day as I know they have become partners. A great story and one we will continue to tell… 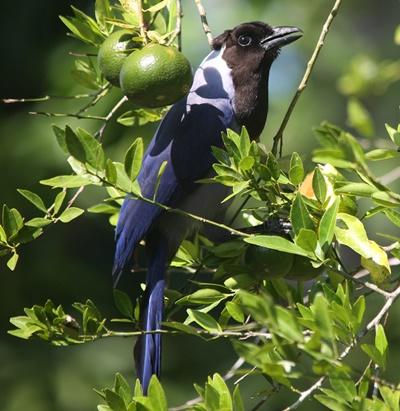 I was incredibly happy to report on our new discoveries last month that brought our total species list for birds to an amazing 478. I also stressed that every time we find a new species it becomes less likely that we will discover more. What do I know! Over the last few weeks we have been taking advantage of the extended dry season to camp deep in the reserve near a seasonal swamp and we were able to record two new species of wading bird. These were identified by using playback. This means were able to lure the birds closer through the marsh grass using recorded calls from a speaker. We were unable to get photos amongst the dense vegetation but the calls were unmistakable and the identifications confirmed. The two species were the Rufous-sided Crake (Laterallus melanophaius) and Gray-breasted Crake (Laterallus exilis).

Later that week from canopy we saw an amazing Red-billed Pied Tanager (Lamprospiza melanolueca) on two separate occasions. The final surprise came in our mist netting when we caught a spectacular Streaked Flycatcher (Myiodinastes maculatus). In total we now have a breath-taking 486 species recorded at Taricaya and the number just keeps growing!!

November will see us release the turtles, prepare for the arrival of a fourth Spectacled bear and continue to see what surprises the Amazon jungle has in store for us….