As the year comes to a close it has been another exciting and pioneering twelve months in the Amazon rainforest. Our biodiversity research has reached even greater heights, we have been recognised internationally for our work once again, the turtle project has carried over into its 12th year, our partnership with Animal Defenders International strengthens, the rescue centre flourishes and so much more.... 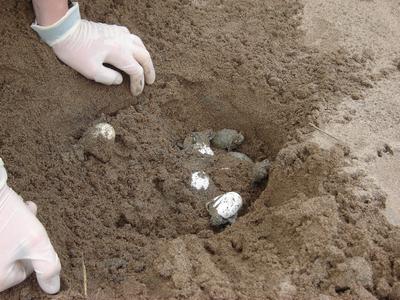 It has become tradition over the years to release the annual baby turtle hatchlings (Podocnemis unifilis) on the 5th of November which happens to be the anniversary of the foundation of Taricaya. This year we celebrated our 15th birthday having started operating back in 2001.

On the afternoon of said day we all headed onto the boat and took our crop of young turtles down river to the Playa Alta beach where 4 months earlier we had camped and patrolled collecting the nests and bringing them back to the safety of the centre. A film crew came from Lima to record proceedings for a broadcast on national television honouring all our years of hard work to save the species. This was the third time in four years the event has been covered by a Peruvian television channel and reinforces the environmental awareness that we have been trying to create about how the Peruvian people can protect their natural resources.

This year we released 895 baby turtles back into the Madre de Dios River pushing our total number of releases well over 10,000. This project has been challenging and time-consuming for over a decade but the discovery of our marked turtles laying eggs on the beach on two different occasions this year has completed the cycle. We now know that the project has worked as there are females laying eggs on the same beach where we protected and released them as babies. This could not have happened without us and encourages us to carry on for as many years as possible. 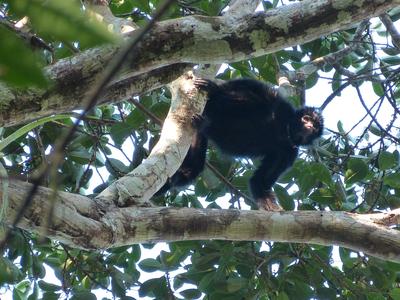 At Taricaya we have dedicated many of our projects not just to protecting existing areas of rainforest but also to prevent large scale felling in the future. Timber extraction ranks as one of the major causes of deforestation in Peru beaten only by cattle farming and gold mining. Over 13 years ago we started our first pilot farm where we demonstrated that mahogany trees could be germinated, transplanted and grown in high densities in abandoned farm areas. Today we work and harvest this home grown timber in our own carpentry workshop showing that even wood from young trees has a value as opposed to waiting 30 years for the trees to reach full maturity.

Due to the success of this project we purchased a second larger abandoned farm plot a few years ago downriver from Taricaya and started working with other timber species in addition to mahogany. Now these saplings need to be looked after and staff and volunteers have been working hard to keep the area clear. We had planted ironwood, cedar, mahogany and “ishpingo” trees and they are growing quickly. However this time we wanted to vary our methodology and planted amongst the trees many different types of banana varieties. The idea was to show that land can be used whilst timber trees grow and also to help make Taricaya more self-sufficient. The large number of animals in the rescue centre means huge amounts of food are bought every week and the main staple of all the primates’ diets is banana.

The project is a success we now harvest over 50 kilos of bananas a week along with other local fruits such as star-fruit, copuazu, limes and passion fruit. We are a long way from complete self-sufficiency but it is a start and we continue to work on the plot and plan to produce our own papayas and other citrus fruits too. 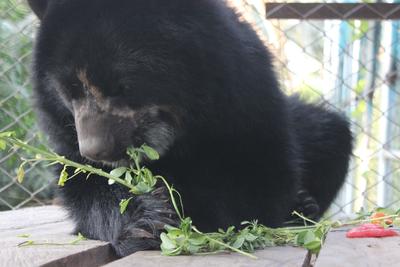 Our partnership with Animal Defenders International (ADI) has grown from strength to strength since we received our first rescued bear (Tremarctos ornatus) nearly 3 years ago. Cholita’s story was a worldwide media event and a heart-wrenching case that opened our eyes to the plight of so many individual bears, the only one of its kind in South America. Since Cholita’s arrival we have rescued a second breeding pair, Lucho and Sabina, and now we had to prepare an enclosure for a fourth bear, Dominga.

These enclosures must be spacious and well designed as a fully grown male bear can weigh over 100 kilos. Strong claws make them excellent climbers and effective diggers and the cage must be escape proof! Nonetheless this is a challenge we relish at Taricaya and staff and volunteers soon got to work. Metal poles were hauled to the site, cut, welded and buried deep into the soil. Platforms, hides and caves built and a cool cement pool built to provide relief in the heat of the day. With maximum effort and minimum fuss the enclosure is finished and we await the bear’s arrival in the New Year. 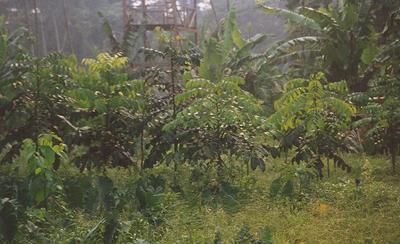 Preserving one of the most diverse ecosystems on the planet and defending its wildlife has been a key objective for Taricaya since it was founded in 2001. Our persistent efforts have not only helped retain a vibrant environment but have also helped decrease the domestic illegal wildlife-pet trade. This effort has been rewarded by the Elsevier Nature Conservation Journal which has rated Taricaya Ecological Reserve as the second best combined animal welfare and conservation organisation in Peru.

While other areas succumb to deforestation, Taricaya has become a welcome refuge with the unique nature of the habitats within the reserve and its ongoing protection. The reserve has become a sanctuary for resident species and those migrants looking for a safe haven on their way north or south.

Whilst awards and recognition are not why we do what we do it is always encouraging when our efforts are seen as successful and models for others to emulate.

These are just a small number of examples where our work has had a positive impact far away from Taricaya and this has all been due to the work of every single volunteer and staff member that has visited us in the last 15 years. Long may this continue and 2017 looks very exciting indeed!