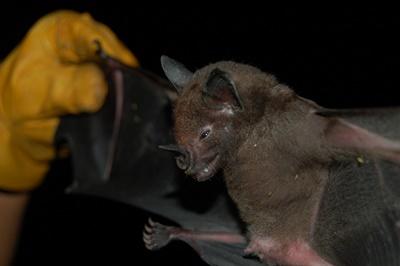 Once again it is time for the latest from Taricaya Research Centre and with our busy season in full swing with over 40 volunteers keen to work hard we have been able to achieve a great deal and push forward on many projects simultaneously. The collection phase of our turtle project has begun; we have been visited by old colleagues to help in our biodiversity research and there is some fantastic news as we join forces with a leading animal rights organisation. As usual, where to begin?

I am very excited to announce that Projects Abroad and ADI (http://www.ad-international.org/adi_home/) have come together to start a new initiative to home rescued circus animals. ADI have been working in Peru for many years collecting mistreated animals from very hard and abusive treatment in the circuses of Peru. Their operation has been a huge collaboration with the Peruvian government, CITES and military and they have successfully confiscated well over a hundred individuals in this campaign alone.

Our reputation as the best animal rescue centre in Peru saw their dedicated leaders visit us at the start of July and we discussed the possibility of helping them by accepting some of their rescued animals that had been taken from the jungles of Peru as babies. Our mutual interest in saving wild animals from years of captivity and abuse saw us quickly reach mutual ground and Taricaya agreed to receive eight individuals in our rescue centre. Whilst all species merit the same consideration- all animals deserve to be left in their natural habitats; there are two very special cases that have achieved international recognition.

The first is an elderly Spectacled bear (Tremarctos ornatus) whose abuse was abhorrent as the circus owners chopped off her front toes to remove her claws and then for good measure pulled her teeth to stop her biting. The Spectacled or Andean bear is the last remaining short faced bear species on the planet and South America’s only bear. Their natural habitat is dense jungle and they are elusive and hard to find. Deforestation and hunting have significantly reduced their numbers and Cholita, as this bear is named, had spent over 20 years in a tiny cage being poked by curious circus-goers and being fed too little. An adult spectacled bear can reach 150kg, Cholita weighs less than 50kg! 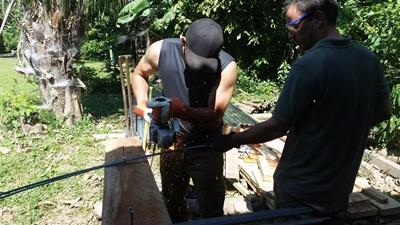 The second case of note is a male puma (Puma concolor). Pumas, or cougars/mountain lions as they are also known, have a huge range found from Canada all the way to Argentina. There are thought to be 5 or 6 subspecies and the versatility of this cat means it survives high in the mountains or deep in the jungle. Mufasa, as this male is called, is another elderly rescue from a circus and whilst he has all his claws and teeth serious malnourishment means that he is relatively small for such an effective predator. His stunted growth is irreparable but he can certainly put on some weight with a proper diet and good exercise. Both of which we can offer at Taricaya!

Joining these two individuals will be three brown woolly monkeys (Lagothrix lagotricha), two Peruvian spider monkeys (Ateles chamek) and a military macaw (Ara militaris); all of which have come from similar backgrounds. The primates upon arrival will be quarantined and then united with our resident troops of the same species and the macaw will also pass health checks before joining our other two macaws to freely move around the centre as they regrow their flight feathers and strengthen their muscles. Our problems were enclosures for the much larger bear and puma.

ADI quickly sent a team in from Lima but there was a huge amount of preparation and manual labour required of our hardy volunteers and we quickly began clearing the areas and preparing materials. I am never amazed anymore by the levels of dedication of everyone involved at Taricaya both staff and volunteers alike but this project was ambitious even by our standards as time was a limiting factor. Working days were lengthened, physical reserves exhausted and then even more was asked of everybody. Nobody backed down and in less than 4 weeks we had successfully completed two enclosures- one of 360m2 (with a roof!) and another of 600m2! It was a great team effort and as the ADI team heads back to Lima we will put the finishing touches to the cages in anticipation of the animals arriving at the start of September. 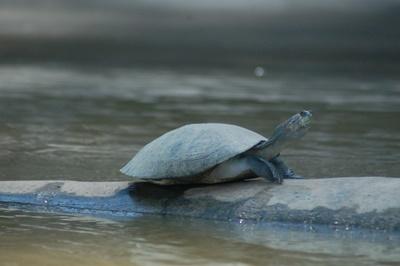 Many of you will know that every year we are responsible for patrolling and protecting a large riverine island about 15 minutes downriver from Taricaya. Playa Alta is a popular sandy island in the dry season as locals come from all over to sink their fishing nets in the narrower rivers and roam the beaches looking for the coveted and expensive turtle eggs. The yellow-spotted river turtle (Podocnemis unifilis) is seriously threatened by poaching of their nests but also from drowning in these huge drag nets that can span hundreds of metres. Every year we diligently patrol the beaches at night and with help from local natives try to beat the poachers to the nests. So far this year we have been very efficient with 43 nests collected and just 3 lost to poachers. This is our highest success rate to date and is a testament once again to the hard work and dedication of our patrol groups that spend hours monitoring the beaches every night.

Since the project’s conception in 2005 we have been improving our methodology and last year our hatching rates were over 80% so I am confident that this year we will once again release over a thousand baby turtles back into the wild. 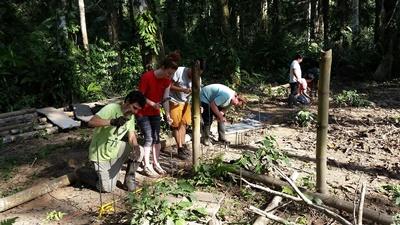 Our busy time of year is a perfect opportunity to invite old friends back to Taricaya and this year was no different. We were able to continue our research in the fields of ornithology, entomology and bats. Juan Molina came for 2 weeks and opened our mist nets daily and with the help of volunteers keen to learn about how we band and study the birds of the understorey we added many more individuals to our ongoing research. No new species for the reserve this time but with so many already registered there is no real surprise there.

Whilst one set of nets were open by day another set were opened at night as Hugo Zamora returned to continue our research on the bats of the reserve. This time he was accompanied by another researcher and by day we were mapping and studying bat roosting sites and at night capturing and collecting biometric data before releasing back into the forest. 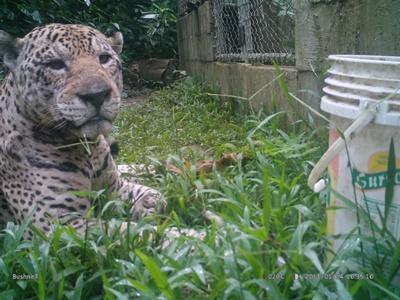 Taricaya continues to amaze as a biological hotspot for diversity and with our bird and bat research so advanced we asked Salvador Sanchez to return and continue his study of the insects of the reserve. The most successful group of animals on the planet there are estimated to be millions of species of insect, most of which are yet to be discovered. Plenty for us to research at Taricaya in the world’s most diverse ecosystem and as Salvador picked up where he left off at the end of 2014 I am sure as he processes all his specimens there will be some surprises and new registers for the reserve.

Before I sign off, I just want to mention that our sensor cameras have been carefully placed over recent weeks. The strange thing was they were only 25m from camp. The reason for that is our old friend the grizzly male jaguar (Panthera onca) has started to visit our resident female once again. Most nights for a fortnight our resident woolly monkeys would sound the alarm as he wandered into the rescue centre to sit by the cage and “visit” with his companion. Imagine our surprise that he has become so relaxed he now pops in during the day also as we caught several images of him just lying by the cage in full daylight chewing on a hosepipe as relaxed as can be!