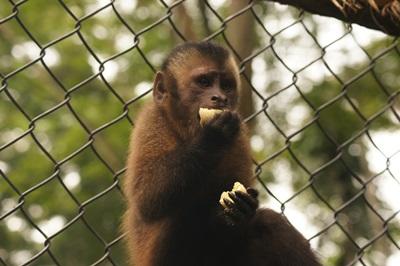 What a great report I can bring you all this month. Our baby turtles have started hatching, we have successfully released our fourth group of spider monkeys, the capuchin monkeys are entering their final pre-release phase and our biodiversity studies continue to amaze and produce surprises.

Those of you who have been following our progress over recent times will be familiar with our pioneering project involving the Peruvian spider monkey (Ateles chamek). Over the last 4 years we had released 15 individuals back into the wild in an area where they had become locally extinct. This year was our fourth group and it was time to take these six monkeys back to where they belong.

The preparation for such a release is long and time-consuming. From the sanitary and dietary controls to the behavioural studies, which individuals to attach radio collars and selection of the eventual release site; everything must be carefully evaluated. This time around we chose a different release site in the hope of avoiding the resident harpy eagle (Harpia harpya). The young eagle had killed four of our previous releases and whilst this is a feature of life in the rainforest and the presence of an alpha predator indicates a very healthy ecosystem we did not want to put our latest monkeys in unnecessary danger. So, with a new site chosen it took us several trips to set up a campsite ready for monitoring the animals after release.

Our work with these monkeys is becoming nationally recognised and so it was little surprise when a national television network asked to join us on the release and document our on-going progress. They duly arrived from Lima and together with local government authorities, a large group of volunteers and, of course, the monkeys we headed off into the forest for the long anticipated release. Over the years we could be forgiven for becoming complacent in understanding the importance of these days but I can never shake the feeling of complete satisfaction when the doors open and animals are returned to where they belong.

This time was no different and we headed back to the camp leaving a small group behind to monitor the newly liberated monkeys. Little did we know that in just a few days they would make contact with our second group released in 2012. This was fantastic news and the fact that the second group is still alive and also in the area is a resounding success. If that was not enough, since our last sighting of this group last year there is another baby in the troop meaning that we now have two recorded wild births in our spider monkey troops. 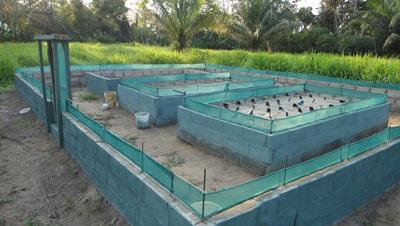 This year we were able to collect over 40 nests of the freshwater turtle-Podocnemis unifilis. Volunteers endured cold windy nights on the river beach collecting these precious nests. The next phase is to monitor the nests in our artificial beaches and ensure that we do not get any insect plagues as happened a few years ago. This year we were very alert and at one point a small species of ant (Hymenoptera) started to invade one of the beaches and we had to transfer the eggs to another one. This is a tricky process as we do want to handle the eggs any more than necessary to increase their chances of hatching. Whatever we did worked! At the end of October we headed down river and released 435 baby turtles back into the Madre de Dios River. All had been marked with a code on their shells representing the year they were born. 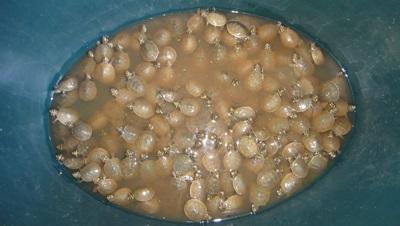 With several nests collected later in the season still to hatch we expect a survival rate well over 80% which is a great achievement and indicative of all the careful time and planning put into the project. I will update you on the final total next month when we release the rest of the babies.

I always seem to be commenting that finding new species for Taricaya is becoming more difficult as time elapses. After nearly 13 years of research we have some definitive species lists and new discoveries become much less probable. Nonetheless we have another new bird species recorded in the reserve. The solitary sandpiper (Tringa solitaria) is a wading bird which resides in Alaska and Canada but migrates to Central and Southern America during the harsh winter. The importance of the Amazon rainforest to migratory birds is well documented but the fact that we have never seen this bird in the area before is exciting. The pair of birds was not caught in mist nets so we were unable to band them but I shall eagerly await next year to see if they return to Taricaya now they have discovered it as a haven for feeding and passing the winter months. 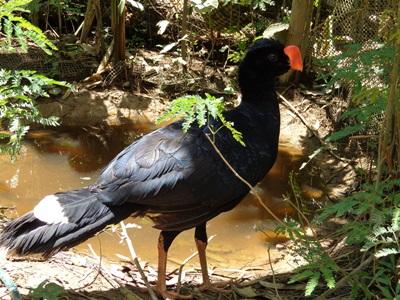 The release of animals back into the wild is the ultimate goal of our nationally acclaimed rescue centre but this final event is the culmination of much hard work on a daily basis. The fact that animals are starting to breed in captivity is an excellent indicator that the conditions are good and the latest success story would appear to be the razor-billed curassow (Mitu tuberosa). We have already had one chick born in captivity and the same pair is currently incubating another egg. I am confident that next month there will be another birth to add to our ever growing list which includes two baby tapirs (Tapirus terrestris) and two red howler monkeys (Alouatta seniculus).

Elsewhere we are approaching the release of our troop of capuchin monkeys which includes two species- brown (Cebus apella) and white-fronted (Cebus albifrons). The final health controls are being implemented and I am looking forward to documenting their release next month.

That is about it for this time but as volunteer numbers continue to remain high I look forward to many more advances next month as we release the turtles and capuchin monkeys, rebuild the canopy platform at ground level, our mist nets will be out and much more….until then..