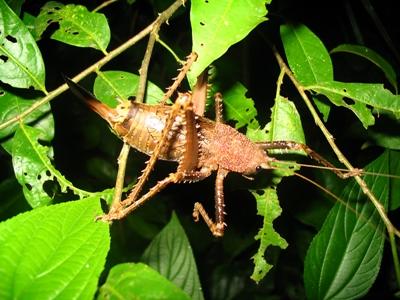 The last few weeks at Taricaya have been busy as usual and with the floods a distant memory we have been able to push on in many of our projects and the results have been very rewarding. After nearly 14 years of working with volunteers on our conservation project I am still amazed by the levels of dedication they show and their ability to work hard in often unfriendly conditions. This month was no different as we faced two huge challenges that required long hours and hard labour in the hot humid conditions. The start of the construction of our new jaguar cage and the annual preparation of our artificial turtle beaches were just two of the tasks we tackled and, as usual, there is much more to report on as well.

It seems that a lot of my news centres around our pioneering animal rescue centre and this is hardly surprising as the centre takes up a large amount of our time and this month we have had some great successes that make all the hard work worthwhile. Breeding animals in captivity is one of the toughest things to achieve in the field of conservation and so you can imagine our delight when one morning on our early inspection rounds we discovered that we had become proud parents once again. 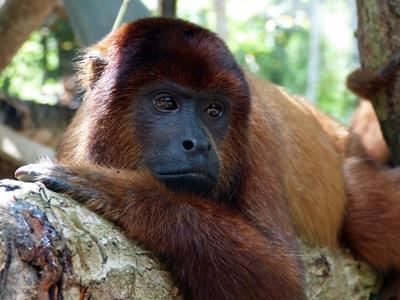 Our resident troop of red howler monkeys (Alouatta sara) produced a second infant just months after we lost the first one to a fall. The fact that the group has two reproductive females at such a young stage in their social development is a fantastic achievement and indicative of their relaxed surroundings, good diet and spacious enclosure. Many of you might recall how years ago we suffered in raising orphaned howler monkey babies as their largely folivorous (leaf) diet is hard to replicate in captivity. It appears that we have got the strategies right as we now have a 100% survival rate with all the babies that arrive at the centre and the fact that we already have breeding adults in our release group is very exciting.

The howler monkeys, just like the spider monkeys (Ateles chamek), have strong social structures and successful releases depend on the group bonds being formed in captivity. There is no greater evidence that the group is well established than to have two females reproducing in the troop and with the others soon to reach adulthood the future for the group looks bright. As a precaution we have separated mother and baby for the first few weeks until the youngster is stronger and more agile as we do not wish a repeat of the accident which befell our first baby as the first-time mother was a little negligent in looking after the infant. 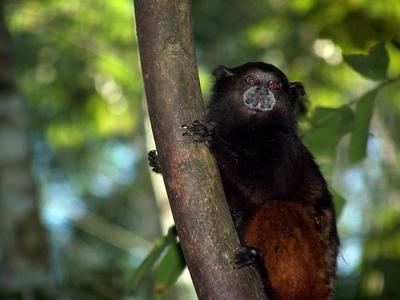 The second bit of exciting news is the miraculous release of “Machete” our severely mistreated Southern tamandua (Tamandua tetradactyla). This anteater, as I reported last time, required stitches in seven different wounds and it was a reflection of the dedication of our veterinary staff and volunteers that enabled a full recovery. The young male will never win any beauty contests but to be able to open the door and allow it to roam free once again healthy and fully recovered was immensely satisfying. We have often seen wild tamanduas around the reserve so I am confident that he will soon find a mate and help repopulate the area.

As I regularly mention, releasing healthy animals back into the wild is one of the best parts of my job and this month we were able to release another long term member of the rescue centre back into the wild. “Cheeky” is a saddleback tamarin monkey (Saguinus fusicolis) that had been with us for nearly a year. Wild tamarin monkeys are seen all over the reserve often creeping down to the kitchen to see if they can snatch some bananas or other fruit when nobody is looking. This meant that I had no concerns as to whether the young male would find its wild relatives and, sure enough, after a few days hanging around the larger primate enclosures he tagged on to a wild group passing through and has moved off to start a new life in the forest that he once called home. 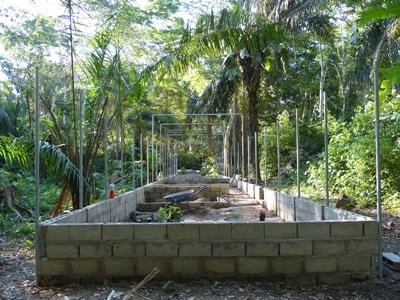 The receding floods caused a delay in the proposed start to a fantastic new jaguar enclosure. The fact that the base of the old cage was under water for several weeks made the new enclosure even more important as the water will only have rotten the old wooden posts even further. Had we been able to start in February when planned then we would be right on schedule to get it finished but the two month delay has really put the pressure on to get the new cage up before the old one becomes too unsafe for such a powerful animal. Fortunately staff and volunteers alike relish a challenge and this case was no different. In a matter of just days we had cleared the new area, removed all the debris and dug trenches for the cement block walls. Next we had to transport close to 800 cinder blocks from Puerto Maldonado and haul several cubic metres of sand and gravel from the river banks to mix the cement and get the foundations set. I am proud to report that the wall and foundations were up in less than a fortnight.

Next we brought the metal poles which had to be soldered and set in cement columns ready for the chain-link netting to be attached. As I write this we are racing along and I am confident that by the time you read the next report our beautiful jaguar (Panthera onca) will be safely installed in her beautiful new home. 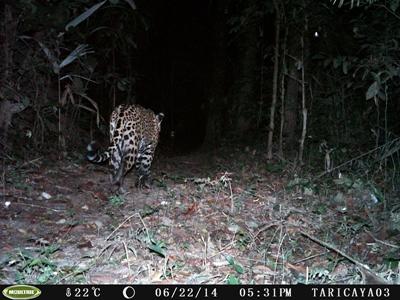 With so much going on at camp it is surprising that we have had time to do much else but variety in our projects is one of the things we pride ourselves on and this month we have had some great sightings in our biodiversity research. Our entomology project is advancing very well and we now have over 170 insects identified down to the species level.

This may not sound like a huge number in comparison to our bird lists for example but the classification keys for identifying insects are incredibly complex. With an estimated 2-5 million insect species on the planet and so many of them looking identical to the inexperienced eye the number of 170 is very impressive. We have hundreds of other specimens in the identification process some of which we have got as far as Genus, others we are still a long way off. I am convinced that amongst our ever more impressive collection there will be some surprises for the scientific community and I look forward to bringing you more news on this project.

Elsewhere our motion-detector cameras have been giving us some wonderful data not least of which were the sightings of a puma and jaguar. These are the second and third individuals caught on camera this year (we can tell they are different by skin colourations and scar markings). These top predators have been scarce in past years and the presence of so many in our reserve is a definitive reflection on the health of the ecosystem. The protection we have been providing the area for the last 13 years means that wildlife populations are flourishing and the nesting harpy eagle at the rear of the reserve is further proof that our jungle can support several top predators.

As the dry season starts to settle in we are getting ready for the new turtle breeding season. Every year the government awards us a large river island called Playa Alta where we camp and rescue nests of the freshwater turtle known locally as the Taricaya (Podocnemis unifilis). Once again the floods left us with lots to do but after long hours in the sun and hauling fresh sand and sieving it through fine netting we now have our three artificial beaches ready for action with the possibility of accommodating over a hundred nests….