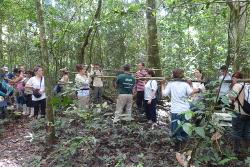 What an amazing couple of months in the Amazon rainforest. We have installed our new sensor cameras, released several animals back into the wild, opened up our mist nets and continued to work on our new farm plot downriver…With numbers on the rise there has been no shortage of willing hands and we have made some great advances these last few weeks.

First I want to report on our successes in the animal rescue centre. Last time I talked about the lows when we lose an animal under our care but this time it is all good news as we released seven healthy animals back into the wild. The first of these was Lazaro our night monkey (Aotus nigriceps). He was duly named because of his miraculous recovery from a near death state when he arrived at Taricaya in 2011. Without the use of his hind legs and so poorly nourished that his fur was falling out we thought he would not survive the first week after he arrived. However we relish a challenge and after meticulous attention from our veterinary staff and 24 hour monitoring Lazaro slowly came back from the brink and after two years of rehabilitation it was incredibly rewarding to return him back to where he belongs.

Our second release was an unexpected one in that about 6 weeks ago a boat from a nearby tourist lodge stopped at Taricaya and handed us a near dead Roseate spoonbill (Platalea ajaja). They had found it on a nearby beach and the tourists had forced the boat to stop and collect the injured bird demanding that they do something to help it. Hence they arrived at Taricaya. At first glance Pinky, as she was quickly named, demonstrated no external injuries or broken bones but was exhausted to the point of death. These beautiful wading birds migrate throughout Peru and all up and down South America and it appeared that the last flight had been too much for her. We held out little hope for her recovery but we battled anyway, force feeding her vitamins mixed with rehydration fluids and after a week or so she was finally able to stand. After this her recovery was remarkable and within just a month we were ready to let her get back to the wild. A quick release was always risky but we did not want her flight muscles to start to wither and weaken and we were not sure how the bird would react when freed. To everyone’s relief she came hurtling out of the kennel and lazily crossed the river. About 10 days later we saw her again near Taricaya. Her lack of nutrition has left her a paler pink than other birds of the same species and it was great to see that she had survived the critical first few days after release. 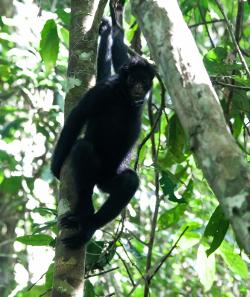 The final release was a huge operation and perhaps the most rewarding of all. May 27th saw us release our third group of black spider monkeys (Ateles chamek) back into the wild. The process of releasing these primates is a complex one as their ancestral range includes Taricaya but hunting and farmers impact has caused them to leave the area as much as 50 years ago. Therefore we must slowly acclimatise the troop to the area, change their feeding habits and monitor there gradual transition. This is in an ideal world but the jungle had other ideas! After just two days in their pre-liberation enclosure a majestic harpy eagle (Harpia harpyja) flew in and took up residence perched above the large cage. The spider monkeys immediately became skittish as this eagle is the world’s strongest bird of prey and their favourite food- large monkeys and sloths! We had to quickly change our strategy as the harpy eagle was in no mood to leave these monkeys alone and the monkeys were huddled together and rightly terrified. Plan B! We recaptured the five monkeys and headed off to another area of the reserve about 2 km from the harpy eagle and its adjacent nest. This area is one more travelled by us as we work around the reserve but we could not leave the monkeys at the reserve’s limit under those circumstances. 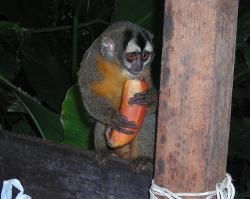 Ideally we wanted to limit the monkeys’ contact with humans but we had to adjust accordingly. Naturally there was no pre-release enclosure either at the new location but as usual we quickly adapted and hoisted feeding buckets up into the trees and assigned groups to watch the troop from dawn until dusk on a rotational basis. The monkeys would not move at night and even if they did our telemetry equipment would soon track them with their new radio collars. Despite the setbacks I am proud to report that we are still closely following the group and that their hastened transition back into the wild is going well as they start to forage for natural foodstuffs and explore their new home territory. 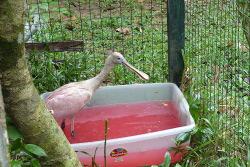 Elsewhere at Taricaya we were working hard on our new farm plot and the weather seems to be helping us as the rains have not abandoned us making planting conditions ideal. We are hoping to recover this abandoned land and make it productive once again. This is a huge undertaking as ideal growing conditions also make it easier for the pioneer species (weeds!) to get a quick foothold also. Nevertheless we relish a challenge and blisters and sore hands were a sure sign of a job well done. Thus far we have sewn hundreds of saplings ranging from fruit trees and palms to help with the consumption of Taricaya, both human and animal, timber trees to study growth rates for future reforestation projects and the occasional decorative species to help brighten up the camp area! This is just the beginning as we must now keep the area clear until our plants are big enough to out-compete the weeds for sunlight and can then look after themselves. Fortunately with a busy summer ahead there will be lots of willing hands ready to make this happen. 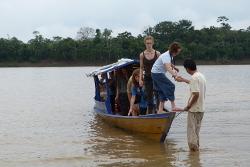 It seems a while since I mentioned our biodiversity studies. This is understandable to a certain extent as our species lists are so complete that finding new species becomes ever harder and harder. Therefore I am incredibly happy to announce that this month we discovered not one, not two but three new species of bird for the Taricaya reserve. This is remarkable and takes our new total to 450 species! Two new species were seen from the canopy and include a beautiful pygmy antwren (Myrmotherula brachyura). The third was a truly bizarre encounter whereby a majestic mottled owl (Ciccaba virgata) flew into our carpentry workshop and allowed itself to be captured, photographed and then calmly released! This total of 450 species is spectacular and we push ever closer to the most species ever encountered in an area smaller than 500 hectares and the world record that this would represent. 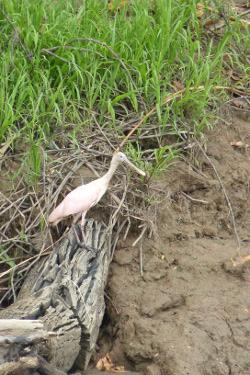 Installing our new sensor cameras is another way to monitor fauna and as the heavy storms passed on and swamp levels dropped we headed out to see what could be captured on film unawares! To test the machines we placed them on the trail to canopy as we knew that volunteers and staff alike would be triggering them on a daily basis. Imagine our surprise to also capture photos of white-lipped peccaries, tapir and wild turkeys. This is a great sign and I hope that next month I will be able to report on many more exciting photos as we move the cameras around the reserve.

As our numbers continue to rise there will be plenty to report on over the coming weeks and I look forward to reporting on the latest news from the depths of the Amazon!