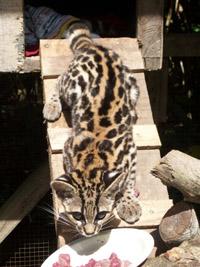 It has been a very productive month at Taricaya with all beds taken and many pairs of hands willing to tackle the hard work week in week out. As usual there is plenty to report on including a fantastic sighting of a juvenile jaguar sitting on the river bank! We have received some new animals in the rescue centre, released two macaws, started working on the new quarantine enclosures, opened our mist nets, continued to work hard on the pilot farm and much more....

However, it is fitting to start this update with news from the animal rescue centre as May 30th saw us celebrate its third anniversary since official recognition in 2008. We planned a series of games in the afternoon and followed that with a BBQ and a fancy dress party where volunteers dressed up as their favourite animal. A good time was had by all and it is incredibly rewarding to look back on how far we have come since receiving our first animals as far back as 2003. The rescue centre has been praised by the government and other private entities that have visited and we can take great satisfaction in the work we are performing in the ongoing battle to re-introduce animals back into the wild. This month we continued our improvements by starting to build a series of larger quarantine cages in a new area more isolated from the main camp. These new enclosures will be more spacious and by moving them away from the camp centre we can smooth the transition for new arrivals as they will not be under constant scrutiny when they first arrive at Taricaya. The relative peace and quiet in the new quarantine area will calm the animals down as they invariably arrive very distressed after forced captivity in Puerto Maldonado. High stress levels can lead to more serious medical consequences and so everybody worked hard to transfer all the construction materials and get the cages underway. I am confident that the new area will be completed next month and this will be another step in the right direction for the project. 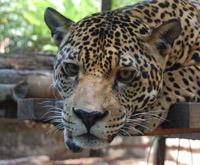 Whilst the construction work was starting it was time to release two of our oldest residents in the rescue centre, a pair of red and green macaws (Ara chloroptera). These individuals have been with us for several years during the painfully slow process of regenerating their flight feathers. These primary feathers are usually cut as soon as the birds are caught to stop them escaping and even with a plentiful and balanced diet can take up to 2 years to re-grow completely. During this time the bird’s flight muscles tend to waste away and so we must observe them closely during their rehabilitation to ensure that they are strong enough to fly properly, albeit short distances initially. It is impossible to build an aviary big enough to allow total recovery and so we let the birds go near their old cage and have built a feeding table near the animal kitchen (where food is prepared for the animals) so that we can supplement their diet. It is immensely satisfying to see the birds familiarise themselves with their new home and as they quickly grow stronger they have taken to flying around the camp and surprising people as they swoop from the tall trees across the open areas. You can almost sense their enjoyment at being free once again and as wild macaws can live as long as 50 years I look forward to monitoring their progress for a long time to come as they enjoy the safety of their new home in the Taricaya reserve. 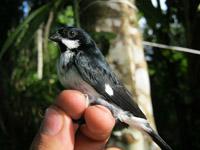 As we said an official goodbye to the macaws their place was soon taken as we received two more animals this month. The first was a very young red howler monkey (Alouatta seniculus). The baby female was only a few weeks old when she arrived and has needed constant attention and feeding ever since. As primates require a lot of social contact when growing up we could not just put her in cage and feed her as depression would set in and probably cause her to die. This meant that we needed a plan, and as many volunteers stepped up to the task she has been under constant supervision with a number of different surrogate parents. During the day she happily jumps from shoulder to shoulder and at night people take turns sleeping on a cot in the animal hospital to keep her company. This level of dedication from everyone on the project is staggering and as she quickly grows we can start planning her introduction to our older female howler monkey in a few weeks time.

The second arrival was yet another margay (Leopardus weidii). This juvenile is larger than the baby we received last month and more aggressive also. Nevertheless in a few short weeks we have once again been presented with the opportunity to set up a captive breeding program for these elusive nocturnal cats. With one male and two females we must now look to construct new cages in the feline area of the rescue centre with a series of connecting doors so that we can manage the cats when they reach maturity and encourage them to breed. It would be a fantastic achievement to release captive-bred margays back into the wild and help strengthen local populations both with numbers and increased genetic variation. This project will take a long time to reach fruition and a lot of work is needed but I am confident we can step up to the task and I look forward to keeping you updated on their progress as they become stronger and healthier in our care.

This month we welcomed back Mauricio Ugarte to Taricaya. Mauricio and I have spent many months together mist netting in Taricaya and have published several papers on our findings but it has been a while since he visited and this time we decided to concentrate our efforts in catching and ringing migratory birds on their way north to escape the cold Patagonian winter. Since our bird banding course in 2009, Corvidae, an international organisation dedicated to ornithology, has created a new national bird ringing group in Peru. This means that as in Europe and North America, birds captured in Peru will be ringed with coded aluminium bands and the data inputted into an internationally accessible database. In other words, if a bird banded in Peru appears in the USA people can read off its code and discover where and when the bird was initially captured. As instigators of this project, Taricaya is one of the first three official banding sites in Peru, and in addition, the only three official banding instructors in the country have also passed through Taricaya either in the course or as practical students. Taricaya is at the forefront of ornithology not just in Peru but South America and later this year we hope to repeat the banding course and expand to implement a bio-acoustic course in conjunction with Cornell University. This is still to be confirmed but playback techniques (calling birds by mimicking their calls) have greatly helped our understanding of bird populations and their behavioural dynamics and it would be a huge coup to run this course in Taricaya.

Even with all this planning we still had time to open our nets and as migratory birds were the target we chose open areas where these birds tend to rest and feed before continuing on their mammoth flight north. New taxonomic changes meant that we had to reduce our species list to 433 before even starting as two species of tanager have been reclassified as just one. So already one down it was time to go! As we identify more and more species it becomes harder to discover new ones but by the end of the two weeks we were up to 435 species. Two new records for Taricaya made the work all worthwhile in addition to ringing all the birds captured and those in the rescue centre. The Lesson’s Seedeater (Sporophila bouvronides) is a beautiful little black and white bird and is an annual migrant heading north this time of year and back south in the fall. The second new register was not a capture in the mist nets but a sighting. The Emerald toucanet (Aulacorynchus prasinus), as the name would suggest, is a magnificent small green toucan and whilst it should be common to the area, we spotted it for the first time just this month. So as we bid Mauricio farewell until July we have once again advanced our biodiversity research and continue to add to an already impressive list of birds.

Elsewhere we continued to work hard maintaining the pilot farm clear and free of weeds. It is an ongoing battle and helps instil in our volunteers a newfound respect for the local people that try to farm this aggressive land on a small scale. As our grass area transects continue to grow we are now concentrating on clearing another part of the abandoned goat pasture for a seed nursery as we attempt to produce saplings for our reforestation projects both in and around Taricaya and further afield in the Palma Real community downriver. We have spent hundreds of hours over the years fighting, to keep the farm up and running and the constant attention and care is starting to reap its rewards as our banana plantation is becoming ever more productive helping feed both animals and people alike and our citrus trees are starting to bough under the weight of fresh fruit. Cocoa and coffee have been abundant for many years now and as the mahogany trees continue to grow the farm is looking ever more complete.

As I sign off for this month I must end on a high...I often mention that over the years we have noticed a real difference in the Taricaya reserve as the animals grow more confident in an area previously unprotected. We have huge groups of peccaries wondering through the reserve, we often capture images of wild tapirs, giant anteaters and much more on our sensor cameras but this month was a first for us as we got a long look at a beautiful young jaguar. The juvenile was sunning itself on the bank of the river and as we drew the boat closer it lazily rose to its feet, looked at us and then calmly moved back into the forest.

It was a breathtaking experience for those fortunate enough to see the king of the jungle and is just another indicator of how we are protecting the ecosystem. The presence of the jaguar was not the amazing part of the sighting as we have seen tracks frequently around the reserve. The calm reception we received and complete lack of fear is what speaks volumes of how the animals of the reserve no longer fear poaching and as long as we can ensure this safety then the future looks very bright for the reserve and the adjoining national park.

Next month we shall be preparing for the upcoming turtle project, finishing the quarantine enclosure, hang our mist nets again and much more so I sign off until then.