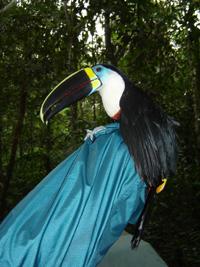 With a new year come new challenges and 2011 promises to be our most exciting yet as we continue to evolve; improving and expanding our existing projects whilst designing and implementing new ones. January has been an exciting time for everybody and as soon as the festive period finished volunteers started flooding in eager to work hard and do their bit in conserving the Amazon rainforest. The heavy storms and violent downpours could do nothing to dampen spirits and once again I have the enviable task of where to begin...

At the start of every new calendar year it is essential to sit down and plan where you want to the project to progress over the coming months and this year was no exception. It goes without saying that we must continue to dedicate resources and time to our long standing projects such as the animal rescue centre, turtle project, biodiversity studies and pilot farm to name a few but we must also look to research new initiatives and push ourselves harder as a team. With this in mind, January saw us prepare for our first ever complete mammal census of the Taricaya reserve. With an exciting new methodology recently tested in Brazil we decided to start a project that would not only confirm the diversity of mammals found within the limits of the reserve but allow us to look at population densities and local migrations of our resident mammals. It goes without saying that this is long term project and our goal is to perform three months of investigation in the wet season and three months in the dry season. The idea is to send five research groups out along different transects simultaneously where all information on mammals sighted is collected. This data includes GPS location, animal behaviour, forest type where seen, group sizes, recording and measuring fresh tracks, collecting scats and much more. Once this data is collated it will provide us with a great overview as to what is happening within the reserve and enable us to speak with greater confidence about the diversity and health of the Taricaya ecosystem. 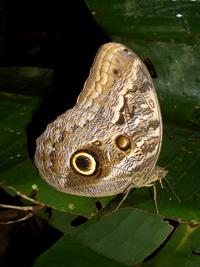 However, before we could get cracking it was essential to ensure that our research transects were open and that it would be easy to walk the trails as quietly as possible without needing to hack through recently fallen vegetation thus scaring any animals in the immediate area. So with machetes sharpened it was out into the storm battered forest to clear the total 15 km of trails to be used in the five transects. The work was hard and often involved crossing freshly filled swamps but in less than 10 days we were all set and ready to go. The first phase was a test run and so as the month came to an end it was crunch time as five groups headed out into the forest with the new project kits and high expectations. We were not disappointed! On that first test run we encountered nine different species of mammal in a total of 19 independent sightings. There were some great sightings not least of which were a neo-tropical otter (Lontra longicaudis) near the creek and several large groups of peccary both collared (Tayassu tajacu) and white-lipped (Tayassu pecari). There were also fresh tapir and jaguar tracks. In conclusion the test was a storming success and February will see us start the three month wet season phase of the study.

In addition to the walking transects we will be installing infra-red motion-triggered sensor cameras next month to provide yet more data on the mammal distribution. As all this data starts to pour in we shall have our work cut out to process it all but I am convinced the end result will be a more complete understanding of how the ecosystem functions and the role different mammal groups have within it. 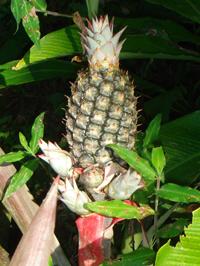 Elsewhere at the centre we have been working hard in our attempts to convince the Ese'eja community of Palma Real to follow our lead and try to recover their abandoned land. As you will recall we have been working hard opening reforestation transects in the large community located about 25km downstream from Taricaya. These plots of land are abandoned after two years of use and are quickly overrun by pioneer plants and pest species such as the quick-growing "paca" bamboo. Our 100m long transects had survived better than anticipated the heavy storms and as a result it only took a little while to reopen them during our first visit of the year. The next trip had a dual purpose as we took hundreds of young pineapple plants for the freshly cleared lines and also took advantage to help de-parasitize the community's local dog and cat populations. The trip was a huge success despite occasional squalls and next month we must continue the work by transferring tree saplings from our pilot farm and taking young coffee plants in bags of fertiliser. Little by little we hope to show the community that good land management does not just entail massive clearing of successive plots of land but that carefully managed poly-cultures can provide both food and economic benefits in the short term as well as further down the line. 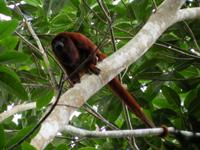 Our second visit to the community saw us return with a young channel-billed toucan (Ramphostos vitellinus) for the rescue centre. The young chick survived the fall from a canopy nest and was collected by one of the Ese'eja families. Most native communities have many exotic animals living within the boundaries and Palma Real is no exception. We saw spider monkeys, howler monkeys and parrots on our last trip but the locals see them as part of their families and whilst the treatment of the animals is usually horrific there is little we can do to remove them as the natives in the Amazon abide by different rules and many laws about protected areas cannot be applied to them. The locals do not hunt for pets but for food, which is perfectly legal; the youngsters left behind with the dead mother are taken back to the family homes. It is a shame, however, as you can often see young animals that will die soon from malnourishment but cannot do anything about it, the natives' attitude is simple- if it dies then we will find another one soon! I can just hope that as we continue to improve relationships with them and they see that the few animals they have given us are thriving in the centre or back in the wild that attitudes change. 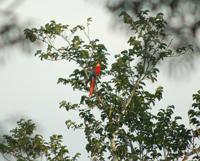 Before singing off this month I must mention the ongoing success of our butterfly project. Whilst a particularly fierce storm caused damage to the butterfly house last month it has not stopped us from producing huge numbers of eggs primarily from the owl butterfly (Caligo sp.). The resulting voracious young caterpillars are growing quickly in their separate containers and I am sure there will be many beautiful adults emerging from their chrysalises over the coming weeks.

As you can see we are already off to a flying start this year and as the bookings continue to fly in we are already looking forward to our busiest February and March ever. This means that we can push forward in so many different areas and I am confident that next month I shall be reporting on many more adventures and some great sightings from our mammal census. So until then.......