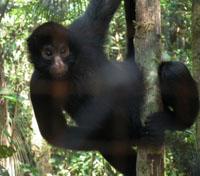 Before bringing you the latest from the depths of the Amazon I must apologise for the delay but so much has been going on that time has flown by. The wet season threatens to arrive with a vengeance and we have been busy all around the reserve as the last of the baby turtles hatched, building started on the reptile house, visits from old friends, new acquaintances and much more. The usual dilemma presents itself of where to start and the completion of the turtle project seems as good a place as ever to begin.

For six years now we have run a repopulation project for the yellow-spotted river turtle (Podocnemis unifilis). With the collection and incubation phases now complete it was time to mark the young hatchlings and release them back into the wild. As I mentioned last month we always release the babies that are ready on our anniversary and so on 5th November as Taricaya Research Centre completed 9 years operating we released 610 baby turtles back into their natural habitat. This was the culmination of another year's hard work and whilst we collected fewer nests and released fewer babies this year this was no reflection on the effort and dedication of everyone concerned. This year we collected just 45 nests but only lost 12 to poachers whereas last year we lost 15 nests to poachers and collected 77 nests. These figures suggest that 2010 was a slow year for the resident turtles and fewer nests were laid in general. This could have been caused by several factors: climatic conditions- this year the full moons during the laying period coincided with cold spells of weather and sharp changes in the rivers water levels: increased mining activity- the inflated price of gold meant that there were many more illegal drag boats working day and night up and down all the rivers in the region: and the reproductive cycles of the turtles themselves- not all females lay every year. Nonetheless it is always hugely satisfying to see the young babies scurry down the bank and get swept away into the now quick-flowing rivers and our ongoing total of successful releases now pushes well over 6000!

The first week of November was exciting elsewhere as we received a visit from an American film crew. Based at the Columbus Zoo, Ohio, Jack Hanna and his family arrived at Taricaya to film a documentary on the rescue centre for his popular TV series "Jack Hanna's into the Wild". On doing research into the Peruvian Amazon and the work done by rescue centres and organisations dedicated to conservation Jack's research crew settled on Taricaya as their best option to film a hands-on project where animals are released back into their natural habitat and where young people are actively making a difference in conserving the ever depleting Amazon rainforest. It was a great day for everyone involved with the project and Jack and his family were extremely friendly and outgoing taking time to meet with the volunteers and take photos. From a professional viewpoint the visit gave us great publicity in our ongoing fight to get mistreated pets back into the wild. As I gave Jack a tour of the rescue centre and explained our struggles and successes it soon became apparent that he was as passionate about our work as we are and he was amazed to see the short-eared dogs (Atelocynus microtis), a personal first for him, and to end up swimming in the river with our ever photogenic otter (Lutra longicaudis). The day flew by and I want to thank Jack, his family and film crew for making the experience such fun and for helping us spread the word about our ongoing battles; often unseen from afar.

With the celebrity visit and anniversary celebrations over it was soon back to work and these last few weeks have seen us start a new initiative at the pilot farm where we are building a new structure similar to that of the butterfly house but designed to investigate the Chelonians of Taricaya. Chelonians encompass tortoises and turtles and as we have identified the 7 known species for the area in the reserve we have decided to start our own research into their feeding habits, growth rates, reproduction methods and general behaviour. Most of these animals are very elusive and little is known about their natural history so I am looking forward to seeing results from this exciting new initiative next year. The work was both hard and monotonous as we first had to clear the ground of the resilient grass, now waste high since the departure of the goats from the farm project, and then sew the different panels of netting into one giant tent which was then raised over long bamboo poles. Nevertheless, everyone was up to the challenge and now we must start digging the holes for the pools as we equip the house for the new residents.

As one project house was being erected another suffered a setback! The heavy storms associated with the often ferocious wet season saw a huge branch fall onto the butterfly house back at camp. The fact that this happened overnight and that the resulting hole was nothing short of colossal meant that we lost all our butterflies in one single bid for freedom! We had tried to prevent such accidents when erecting the butterfly house by clearing everything above the area and by putting it in the lodge clearing next to the dining room but such was the strength of the storm winds that the branch must have covered a good 10 metres in the air before landing on the roof. With such a freak accident there is nothing to do but pick ourselves up and move on. We have rebuilt our collection traps again and it is just a matter of time to get the project running smoothly again in the newly repaired enclosure.

After such a successful visit earlier in the year we welcomed back some old friends from Arequipa. Hugo Zamora and Cesar Medina were keen to continue their research into the bats and small mammals of Taricaya. The wet season provides different conditions to the dry as there is generally more food available and so animals tend to have their babies to coincide with this time of plenty. The sampling techniques used by both were similar to last time with mist nets used to capture bats and various different forms of trap for the rodents and marsupials. The work was fun and as we even managed to get mist nets up on the canopy walkway the results were amazing. With some secondary identification necessary it is possible that Taricaya has reached an incredible 45 species of bat and whilst we are not yet certain there is a possibility that we have captured a species new to science. It is far too soon to be celebrating as more painstaking analysis is required but nonetheless it is a very exciting time and during this visit alone we have added 8 new species of bats to our lists and when Cesar finishes processing his data in Arequipa there will be further new mammal species confirmed for the reserve.

Such advances so late in the year have been made possible by continuing high numbers at the centre and as over 10 volunteers spent Christmas in the reserve it is time to look back over another record breaking year with some unbelievable moments that will contribute further to our history and provide encouragement over the coming months as 2011 looms over us...as usual how to keep it brief! 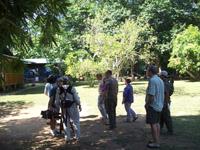 The year 2010 saw us welcome 199 volunteers to Taricaya and whilst most stayed for months, others weeks, some just days, it has been a huge team effort over the last 12 months and we have achieved some remarkable goals. Here are some astounding facts about our research into the biodiversity of Taricaya and by extension the south-eastern Amazon. Whether tending mist nets to monitor birds and bats; digging pitfall traps for frogs and rodents; hanging traps for butterflies and marsupials or surveying from the platforms with binoculars we have spent thousands of hours collecting data on the rainforest around us and even though we have completed our ninth year of investigation we continue to discover new species for the reserve and our species lists become ever more complete.....

To date we have registered 434 species of bird, 103 species of mammal (including 45 species of bat), 49 species of amphibian, 63 species of reptile, 167 species of butterfly and over 300 species of plant. These figures are breathtaking for a relatively small patch of rainforest. To put it into context we have close to 1 species of bird per hectare and 1 species of mammal every four hectares! This is a reflection of dedicated research and indicates an area exceptionally rich in biodiversity. Who knows what 2011 will throw our way but as we continue to modify and expand our research techniques there can only be more surprises ahead and I look forward to bringing them all to you over the coming months.....

Elsewhere at Taricaya the rescue centre has grabbed many of the headlines with the first reintroduction of spider monkeys (Ateles chamek) into the region, many success stories with nursing badly mistreated animals back to health such as our young jaguar (Pantera onca) and our expansion with larger enclosures designed for specific types of animal. Our work continues to generate more and more interest and our ongoing efforts helping the government authorities mean that the future is bright for 2011.

This year we completed our sixth season of the turtle project and the new research enclosure will contribute to discovering more about the turtles and tortoises of Taricaya over the coming months. The pilot farm has changed its focus over the year as we now move towards more direct research as the short term projects have been implemented with many of our neighbours, improving their standard of living. Now we must look longer term to couple these projects with larger scale projects to protect the rainforest and reforest the areas that have been devastated in years gone by.

The visits of several film crews including the BBC, Sky TV and Jack Hanna have served to increase awareness of our work and with volunteer numbers already high for the coming year I am sure that we will smash yet more records and welcome even more people to Taricaya in 2011. It just remains for me to thank everyone involved in the project for their hard work and dedication over the last 12 months and the future looks very bright for all of us involved in Taricaya and our ongoing mission to conserve the most diverse ecosystem on the planet!