The hardest part of compiling these updates every month is finding where to start and as our volunteer numbers have increased again this month I am faced once again with the same dilemma. March has seen us hard at work on rebuilding work in the rescue centre, mist-netting, trail monitoring and another visit from a film crew, this time a BBC team from the Natural History Unit.

When I look back over the many years of work here at Taricaya it strikes me that the surprising and extraordinary seem to represent a large percentage of what is mentioned in these updates and this is totally understandable as the Amazon rainforest is a truly remarkable backdrop with excitement and adventure around every corner. Nonetheless, it is often the day-to-day routine that provides us all with so much enjoyment and satisfaction. The fact that you wake up every morning to the sound of howler monkeys and toucans filling their lungs to define their territories, the unpredictable weather changing from blazing sun to torrential downpours in a matter of minutes and the onset of evening accompanied by the chirping chorus of frogs and squeaks of bats all make for an unforgettable experience. By nature no two days are ever the same at Taricaya and this makes the daily routine a pleasure in itself and it is no surprise that volunteers often consider this the most rewarding part of their stay with us. The fact that you are interacting with wild animals in the research centre, walking the many trails around the reserve and learning about the ecosystem you have chosen as home for a few months makes every day special. This was brought home to me just a few days ago when I took the whole group of volunteers out into the reserve on an “Eco-walk”. The rainforest is a network of complex interactions between plants and animals and the levels of specialisation you see everywhere you look never cease to amaze. Nobody could ever claim to know everything there is to know about the jungle but seeing the excitement and amazement on people’s faces as they learn just a little bit about where we choose to live reminds me of how I felt 12 years ago when I first set foot in the rainforest. Perhaps this is why we should continue to battle to conserve the most diverse ecosystem on the planet, not just for the continued well-being of the millions of species found in the rainforest but so that future generations will be able to witness them for themselves and enjoy them as we do now. 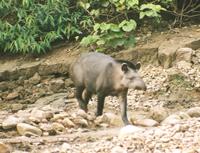 In addition to the “Eco-walk” we undertook a perimeter walk of the reserve this month. As part of our control of the area it is important to monitor the borders of the reserve and check that there has not been any illegal activity such as hunting or timber extraction. It is a fun day for everyone as the heavy rains means that there are several swamps that must be crossed, often swimming, and the 10km hike ensures that everyone gets back exhilarated if a little weary! There were no signs of intruders which was excellent news as our continued presence in the area deters strangers from damaging the forest. The heavy mud meant that there were also many tracks to be found and the relative abundance of spoors from indicator species such as tapirs (Tapirus terrestris); white-lipped peccaries (Tayassu pecari); jaguar (Panthera onca) and red-brocket deer (Mazama americana) suggest a healthy ecosystem. These tracks were impossible to find when we started Taricaya over eight years ago and so their presence in numbers is a reflection of our success re-establishing a safe environment for the fauna in the reserve. We found huge tapir tracks just 200m from the main camp area and jaguar tracks not much further away! We will use these “hot-spots” as prime sites for our sensor cameras as we resume this project later in the year.

This month we made a follow-up visit to the Ese-Eja community of Palma Real to check on our reforestation transects. We have built solid relationships with the 80 plus families over recent years and we are trying to help them recover land that had been cleared for agriculture and then abandoned. Unfortunately the area had been covered by a thick pioneering species of bamboo and so continual clearing of each transect is necessary. This was our fourth follow-up visit and over the last few months we have discovered that certain species flourish in these tough conditions whilst others struggle to grow or even survive. The Brazil nut trees had fared the worst and so this trip we took cedar saplings to replace them in each line. The work was hard but rewarding and volunteers took advantage afterwards to buy some local “artesanias” (necklaces, bracelets, bags etc.) made by the native women. 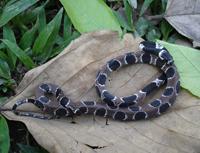 This particular visit saw us return with a very young red howler monkey (Alouatta seniculus). The young male cannot be more than 6 weeks old and the mother must have been shot for food. Natives are allowed to hunt in the forest but not for the commercial sale of any meat and so there are often young animals in such camps. The young male is surprisingly healthy which means that the mother must have been killed just a few days before we visited as the young children know very little about caring for wild animals and see them just as living toys. The youngster is gaining weight rapidly back in the rescue centre and hopefully we can introduce him to our young female over the coming weeks.

Elsewhere in the rescue centre it was time to pull down our multi-purpose enclosure with many smaller cages designed to house parrots, parakeets and other small birds and mammals. After 5 years the elements had done their worst and so we stripped the whole unit down to the cement base and started again. The new cages are slightly larger as we have reduced the central area of the enclosure and the corrugated iron roofing panels were recycled. Upon completion in a few days, we will have four new cages allowing us to free up the quarantine cages and return the blue-headed parrots (Pionus menstruus) and red-masked parakeet (Aratinga erytrogenys) from their temporary cages built to allow the repair work.

With so much else happening this month there was little time to put up our mist nets but we were able to study one new set of transects along the second half of Sheep Frog trail. As you might recall we placed the nets at the start of this trail last month and so we continued where we had left off. Heavy rains meant that we lost a whole afternoon of study but nevertheless we captured close to forty birds in the two days including a Buff-throated Woodcreeper (Xiphorynchus guttatus) with coloured bands from our 2005 study and a metal ring from our banding course last year. As we continue to monitor the birds and record the movements of individuals around the reserve we can piece together a clearer picture of how the animals migrate within the area according to the different seasons (wet and dry). We also caught a pair of beautiful American Pygmy Kingfishers (Chloroceryle aenea).

To round off another packed month at the reserve we received a visit from the world-famous Natural History Unit. This branch of the BBC in the United Kingdom has been responsible for some of the most spectacular wildlife documentaries ever produced with their most famous presenter being Sir David Attenborough. This visit was related to a series of children’s programs on deadly animals and was presented by the charismatic Steve Backshall. “Deadly 60” is now in its second series and Steve was after anything he could find on the trails. We were able to film some shots with many different animals and rounded off the final night walk with the capture of a beautiful Ornate Snail-eating Snake (Dipsas catesbyi). I look forward to seeing the Peru episode of the show that has been so widely praised back in the UK.

That is all for this month and April will undoubtedly bring lots more adventure from the depths of the rainforest.....