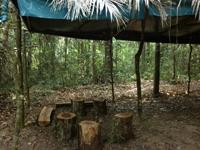 As the river continued to drop and the rains show no signs of arriving it has been a hard month working under a scorching sun and dealing with countless sand flies but with the lodge still at capacity, August has proved to be another highly productive month. We have been camping every night on the turtle beach, strung up our mist nets, continued to improve the rescue centre, battled on with clearing the trails and finished the pre-release enclosure for the resident spider monkeys and much more.. 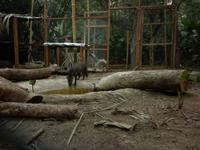 Mauricio Ugarte is an ornithologist and curator of the Natural History Museum in Arequipa. An old friend to Taricaya his visits over the years have always been energetic and this time was no exception. His goal this month was to set up mist nets in locations suited to the capture of migratory birds pushed north by the harsh winter in Patagonia and so we tended our nets in partially open areas along the edge of the river. A secondary aim was to try and register new species of seed-eating birds which favour the grasses of open areas and of which we have surprisingly few species catalogued for the reserve. There was success on both fronts! Not only did we catch new species in the nets but we sighted two new species whilst passing the time between net revisions. One amazing sighting was the incredibly rare Maguari Stork (Ciconia maguari) of which we saw eight individuals flying in a "V" formation as they continued on their migratory path. There have been just a handful of sightings in Peru of this large wader and whilst they were too far off to get good photos the distinctive pink colouring on their legs, seen through binoculars, distinguished them from the much more common Wood Stork (Mycteria americana). Back in the nets we caught a beautiful seedeater called the Masked Yellowthroat (Geothlypis aequinoctealis) and a very rare migrant in the Fawn-breasted Tanager (Pipraeida melanonota) which has not been captured previously at an altitude lower than 600m above sea level. Taricaya rests at about 170m above sea level! 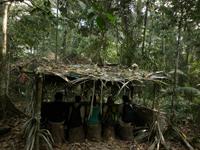 During the 10 days of Mauricio's visit we increased our bird inventory list to an amazing 434 species, 6 new registers for Taricaya. Volunteers spent many hours in the field learning how to identify birds both in the hand and at a distance and a great time was had by everybody. An added bonus to the new additions for Taricaya was that we caught many birds in the mist nets of which we did not have photos. Some of these were truly amazing not least the Barred Forest-Falcon (Micrastur ruficollis), Tropical Screech-Owl (Megascops choliba), Starred Wood-quail (Odontophorus stellatus) and Chestnut-capped Puffbird (Bucco macrodactylus). My thanks go to Mauricio and his assistants who volunteered to come and help out and I look forward to a return visit in the near future.

Back at the rescue centre we were hard at work remodeling cages and moving animals around and this was due to the arrival of a baby female jaguar (Panthera onca) just 3 months old. The young cub was brought from a nearby town on the Brazilian border called Iberia where she had been found abandoned by the mother after she had fallen down a steep bank. The government quickly called us and we transferred her to the reserve. Maintaining and feeding large cats is both expensive and difficult and with our resident jaguar, Preciosa, unlikely to be released after 4 years with us we made it very clear that we would treat the injured baby and nurture her back to health on the condition that her release would be authorised when she is old enough to fend for herself. So Bella, as she has now been christened, will be with us for the next 9-12 months and, having treated her wounds and given her a series of injections to boost her immune system, she is settling in well albeit with an understandable and, ultimately necessary, dislike for people. The unexpected arrival meant that we quickly shuffled other residents around and after disinfecting and redesigning other cages every animal is happily re-housed with the jaguar cub in a suitably sturdy cage and our juvenile otter (Lutra longicaudis) relocated to the end of the feline wing with a new pool to keep him cool. 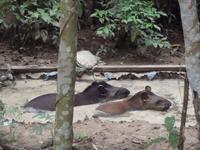 Our next task in the rescue centre was the very onerous task of cleaning out the tapir pool and replacing the old plastic and sand bags with a concrete structure. Tapirs (Tapirus terrestris) are terrestrial animals but love swimming and choose to defecate in water unless there is no other option. The task of cleaning the tapir pool and changing the water has been the scourge of many a volunteer over the years but a new concrete pool will make the task easier if not less odorous! It was hard work with lots of gravel and sand needing to be collected from the ever expanding beaches in the river and then hours of mixing cement and molding the wire base in the original hole that had been left to dry out. Working with cement meant that the job had to be completed in one shift and so there were many tired volunteers after toiling for several hours. The result was a huge success and our two resident tapirs are very happy in their new pool and soon christened it! 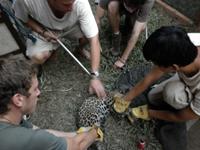 Our most ambitious project to date at the rescue centre is the proposed release of our troop of spider monkeys (Ateles chamek). These large primates are locally extinct in many regions of the Amazon rainforest in Peru due to habitat loss and hunting and at Taricaya we are currently managing two groups in captivity. The adults have passed the requisite blood and feces tests and have been given the all clear for release and so it was time to finish the pre-liberation enclosure deep in the reserve and build an observation blind and camp site. Because these animals are no longer found in the area their ultimate release is more complicated as they will not just unite with a wild troop and we must monitor their behaviour in a large enclosure where we will slowly change their diet and observe how they react to their relocation into a forest habitat which they have not experienced since being snatched away as babies. The adult group will be moved in the first week of September and we must watch them carefully and study their reaction to their new surroundings. If all goes according to plan the monkeys will be kept in the enclosure for 3-6 months before being released back into the wild. With phase one complete, our juvenile troop, now 6 months older, will be moved into the same enclosure and eventually will be introduced to the now wild group after a further adaptation period. It is a highly ambitious project that has never been tried before and we all hope for a successful outcome. Volunteers will be responsible for monitoring the monkeys' behaviour and will help transport food out to the enclosure and by camping nearby we can study their moods and reactions whilst trying to ensure the safety of the individuals as they get accustomed to their new home.

I mentioned last month the research we performed on the smaller mammals of the reserve and that one of the methods we utilised were pit fall traps. As this capture technique can also double for amphibians and reptiles we left them in place when Cesar returned to Arequipa and soon after he left we caught a new species of snake for Taricaya. Tantilla melanocephala is a type of earth snake which is both small and terrestrial and this is how it came to fall into one of our buckets. Very little is known about this elusive serpent to the point where there is not even a common English name for it. After so many years of research into the herpetology of the reserve it was great to find a new species and now we have 33 species of snake registered and a fantastic total of 111 species of amphibian and reptile. 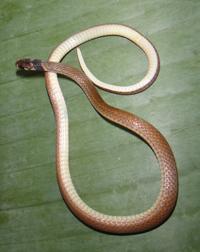 Continuing on a herpetological theme this month saw our continued monitoring of the turtle beach and I must thank all the staff and volunteers for their hard work in camping every night on the beach often in cold conditions. On August 31st we officially finished the patrol and collection phase of the project and we managed to rescue 45 nests and a total of 1356 eggs during the 6 weeks. This number is considerably lower than last year but I must emphasise that this is not a reflection of decreased effort on our part but a quirk of nature. We lost only 3 nests to poachers this year whereas last year we lost close to 15 and so the lower numbers are the result of some other phenomenon. It is purely speculation at this point but the factors could well include climate (there were significant temperature drops at night after very hot days), water levels (the river has been incredibly low), illegal miners (the high price of gold at the moment means that there are more illegal drag boats on the rivers hence disturbing the turtles) and high levels of air pollution (the lack of rain for 2 months means that farmers have been burning their land to recycle nutrients and thick smoke has been hanging over the forest for many weeks now). We must now await the occlusion of the eggs but in a project such as this even if we were to release just one baby turtle back into the river it is a success as all the nests would have been poached. Obviously we shall release many more and I hope that by the end of November there are another 1000 baby Taricaya turtles back in the wild!

Before signing off this month again I must mention yet another filming project at Taricaya. This month it was the turn of Sebastien Turay to visit us in order to film a short documentary for French national television. The program concentrated a lot on the animal rescue centre and our work with the spider monkeys and is due to air later in the year in a prime time slot early Saturday evening. My thanks go to Sebastien for his very low key approach and for making us all feel quite natural about the whole experience. I look forward to seeing the finished product as our international recognition continues to expand!

Next month I am certain there will be plenty more to tell and I hope to report on the relocation of our spider monkeys out into the reserve, more excitement at the rescue centre, amazing encounters on the trails and much more...until then!