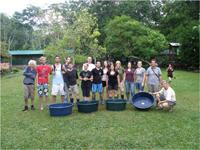 As the seasonal storms hit in earnest it was a case of buckling under and making the most of the clear spells in a month where we released the last of our baby turtles, hosted the first bird banding course in Peru, captured a new species of snake for Taricaya and received some new additions to the animal rescue centre. 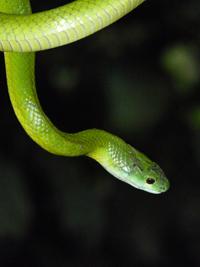 As river levels raised quickly it was time to reintroduce the last of this year’s turtle hatchlings back into the wild. Every year I praise the team effort on this, our longest standing project, and after another fantastic year we have smashed our record once again. I am very proud to announce that 2009 saw us release 1600 baby turtles back into the river Madre de Dios. Last year’s total was 1370 hatchlings and this huge increase reflects several important factors. Firstly, as one would expect, we continue to improve our methodology during every phase of the project from the beach monitoring and nest collection to the transfer of the eggs into the artificial beach. Nonetheless, I believe that a major contributing factor is that the turtles we released in 2004/2005 are now at an age where they could potentially reproduce. At an age of five, young females can start to lay eggs, albeit in smaller broods, and the increase this year is certainly due, in part, to the turtles we released several years ago. Many of you might recall the photo I captured of a young female with a marked shell earlier this year so we know for certain that despite high predation rates our Taricaya hatchlings are coming back to the beach where they were released to lay their first eggs. With this being the case, the future looks a lot brighter for the species (Podocnemis unifilis) in the area around the Taricaya reserve, but, there is still a huge problem on both a national and international scale and we can only hope that our efforts can inspire other organisations and governments to implement similar projects.

Continuing on a herpetological theme we were very pleased to capture a new species of snake for the reserve. As studies continue over longer periods of time it becomes increasingly difficult to encounter new species in whatever field you are investigating and this was our first new snake in over six months. The Emerald Palm Snake (Philodryas viridissimus) was sunning itself on the roof of the last bungalow and after a titanic struggle we were able to get it down and under control whilst avoiding a nasty bite. Although rear fanged these snakes have nasty venom and, whilst not lethal, a bite would cause severe swelling and discomfort. The shades of green on this species are breathtaking and everyone was thrilled to get some good photographs and biometric data before releasing it at a safe distance from the centre. I am certain that I will be talking about new discoveries in the field of herpetology (amphibians and reptiles) again soon as the start of the heavy rains always triggers an increase in activity from the frogs and toads in the rainforest and we shall start our nocturnal frog hunts again on a weekly basis during the wet season.

The animal rescue centre received some new residents this month also with the arrival of two young primates. A baby female spider monkey (Ateles chamek) was the first to arrive and she can be no more than a few weeks old. Her progress is going well and whilst she is still far too young to be integrated with our juvenile troop of five youngsters she is feeding well and her future looks bright with a possible move from the nursery to the larger enclosure in the New Year. The second arrival was a baby male red howler monkey (Alouatta seniculus) again no more than a few weeks old. Red howler monkeys are notoriously hard to raise in captivity due to their specific diet in the wild. They are truly herbivorous primates that feed on leaves from emergent canopy trees and so replicating this diet in captivity is almost impossible. A baby this young will also suffer in being away from its mother, assumed shot, as there are many antibodies and digestive enzymes that would be passed from parent to offspring. Nevertheless we shall do our utmost to maintain it during the tough first few months until we can guarantee its survival. 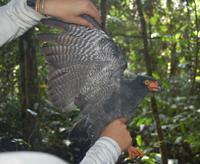 Elsewhere at the rescue centre there was some good news for one of our avian residents. The Striped owl (Pseudscops clamator) that arrived a few months ago has almost doubled its body weight and is flying strongly around its cage but the problem we had was where to release it. All reports on the natural history of this bird suggest that it inhabits large open areas such as grasslands and big farms so we were in two minds about releasing it into the reserve which does not possess huge open areas. Then, one afternoon, on our way back from Enrique’s island we were passing the pilot farm in the boat and we saw a wild Striped owl perched on the river bank obviously following a troop of squirrel monkeys that was passing through. This means that there are wild individuals in the area and we can release our bird at the farm confident in the fact that it will find sufficient food and a potential mate. This is a huge relief and we shall now start to plan the release of this majestic hunter back into the wild.

As many of you will know, the field of ornithology is a personal favourite of mine and our research in the reserve over the years has enabled the publication of some of our findings with much more data still to process. A just reward for years of hard work was when our long time partner in this field, Mauricio Ugarte, came to me earlier this year with the idea of an ornithological course at the centre. This month Taricaya became the first official bird banding station in Peru with a mist netting course and banding evaluation provided by international instructors. We were visited by students from all over South America who had been carefully selected as the best candidates for the course. This was a purely scientific gathering of like minded people keen on furthering the study of birds and its use in conservation and the week was a resounding success. With the support and help of our volunteers and staff we were able to set up banding stations around the reserve and we ringed and processed close to 200 individuals with coded metal bands.

It is always a pleasure to learn from experts in any field and my thanks go to John Alexander from the Klamath Bird Observatory in Oregon, Pablo Elizondo from Costa Rica, Miguel Moreno from Columbia and, of course, Mauricio, who gave their time and knowledge willingly. The conference was a resounding success and has helped put Taricaya on the map internationally with our huge diversity of birds, our commitment to researching them and ultimately, their conservation. I am confident that this will become an annual conference and the information we collect coupled with the work Mauricio and I have been undertaking since 2005 will broaden our understanding of the complex relationships within the bird communities of the rainforest. 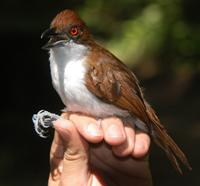 Aside from the success of the course itself we were able to benefit from the presence of many experts and numerous mist nets placed simultaneously around the reserve and as one would expect, we were able to add some new species to our bird list. In fact, we added five new species that week which takes our total to 428 including the Striped owl I mentioned earlier. Two of these new species were caught in mist nets; the Long-tailed hermit (Pheathornis superciliosus) and Spot-winged antshrike (Pygiptila stellaris); two were identified by their distinctive songs and resultant play-backs, Barltett’s tinamou (Crypturellus bartletti) and Ringed woodpecker (Celeus torquatus); and the fifth new species was seen on one of the trails, Brown-crested flycatcher (Myiarchus tyrannulus). There was plenty of action and adventure also with the unexpected capture of a Slate-coloured hawk (Leucopternis schistaceus) and the feisty Great antshrike (Taraba major).

Once again I would like to express my gratitude to everyone involved in the project this month. November has seen yet more breakthroughs in various projects, a continued dedication to existing ones and hard work from everybody. Next month I shall be looking back over 2009 and the highs of another fantastic year in the Peruvian rainforest and, undoubtedly, reporting on more great achievements and highlights from the month of December. Until then…..