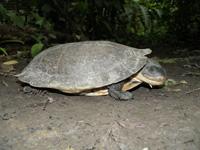 It is often hard to know where to begin in these regular updates from the heart of the Amazon but this month our respective diversity studies must take the fore after some truly amazing discoveries and great sightings. I will start with our herpetology research and whilst our resident expert, Daniel Neira, continues to move his pitfall traps around the reserve it was actually a random encounter on an observation walk that provided the greatest excitement this month.

It is often hard to know where to begin in these regular updates from the heart of the Amazon but this month our respective diversity studies must take the fore after some truly amazing discoveries and great sightings. I will start with our herpetology research and whilst our resident expert, Daniel Neira, continues to move his pitfall traps around the reserve it was actually a random encounter on an observation walk that provided the greatest excitement this month.

There are seven species of Chelonians (turtles and tortoises) recorded in the entire province of Madre de Dios and this month we found our sixth here at Taricaya. The Amazon toad-headed turtle (Mescolemmys cf raniceps) is a relative enigma to the scientific community as very little is known about its life history. Their scarcity means that few individuals have ever been found and fewer still have been studied in depth. As with all such captures, Daniel took all the necessary biometric data before releasing it back where it was found. Even with all that excitement the reserve had one more surprise for a different group walking along the Quebrada trail. On their way to collect the mist nets they came across a magnificent, if slightly daunting, Amazon bushmaster (Lachesis muta). This particular snake was at least two metres long and simply slithered off the trail and into a nearby hole. The group was able to take some good photos but from a safe distance as this viper is both aggressive and deadly! 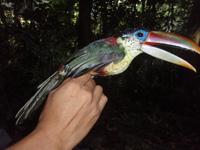 The dry weather has caused a significant drop in water levels and the appearance of the first beaches in the river spurred us to start our first turtle census of the year. These censuses are designed to monitor the numbers of the Yellow-spotted river turtle (Podocnemis unifilis) in the area surrounding the beach where we shall be collecting the eggs later this year. The scorching sun made the first trip uncomfortable but worthwhile as the midday sun meant many turtles were basking on the logs along the river edge. We counted a total of 93 individuals and sightings of caiman, squirrel monkeys and coatis made the expedition a great success. At the peak of the egg-laying season last year we counted in excess of 200 turtles in one such census. This data is very important as we try to estimate resident populations in the river and the number of turtles that migrate to the area just to lay their eggs.

I recall reporting last month the success of our mid-canopy mist nets and the birds we had been able to capture but May saw us discover not just one but two new species for the Taricaya reserve. As any species list continues to grow it becomes increasingly difficult to encounter new additions and with over 400 species of bird already registered in Taricaya I would have been happy with just one new species this month. The discovery of the Amazonian Barred Woodcreeper (Dendrocolaptes certhia) and the Black-tailed Leaftosser (Scelerurus caudacutus) take our total number of bird species for Taricaya to 408! This is a truly phenomenal number in such a short period of time and as we continue our monitoring in June I hope to report further successes. In addition to these new species we were fortunate enough to capture some beautiful birds that were recorded in the reserve but had yet to be caught and photographed. These included a Chestnut woodpecker (Celeus elegans), Curl-crested aracari (Pteroglossus beauharneasii) and a beautiful Bicoloured Hawk (Accipiter bicolor). 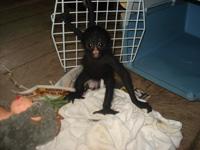 The animal rescue centre continues to operate smoothly and this month I was very pleased when we got a call from INRENA, the government branch responsible for both the reserve and rescue centre, and they brought us a baby spider monkey (Ateles chamek). Whilst it is preferable that we should never have to receive poached animals it is an encouraging step that the government is now actively bringing us confiscated pets as it means that they are recognizing our efforts in this field and are confident that the animals will be well-treated and re-habituated into their natural environment. This comes at a time when we are starting the pre-liberation phase with our adult group of spider monkeys and I must applaud the patience of all our volunteers this month in sewing large panels of netting that will be use to build a release enclosure deep in the reserve. The combined expertise of Raul and Daniel Medina means that we have located an ideal site for this enclosure with plenty of natural food sources and next month will see us carry all the materials in to the site and begin construction in situ.

Back at the lodge the butterfly house is starting to take shape as we have begun to transfer the necessary plants from the reserve into the enclosure. These plants have been identified as those required by our study species of butterfly for the laying of their eggs. Butterflies will not lay their eggs on any host plant as the leaves must be edible for the caterpillars. The high levels of toxicity in rainforest plants mean that different species of caterpillar can only digest certain types of leaves. That said, once the eggs have hatched inside the butterfly house the caterpillars will be removed to a laboratory with food provided for each individual or else the caterpillars will strip the host plants of leaves in a matter of days and we would need to start the whole process anew! 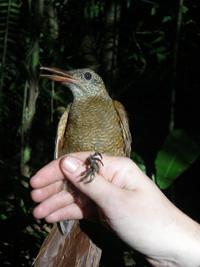 The butterfly house will also play host to our study group of freshwater turtles and a fibre-glass pool has been built in town and brought for installation inside the enclosure. The babies are not growing quickly in their current tanks and this could well be a result of limited space in the terrariums. The extra space of a large pool should enable quicker growth rates and provide us with a more accurate model for their growth curves in the wild.

As volunteer numbers continue to increase we are able to work on several different projects in parallel and we have continued our maintenance of the trails, harvested and peeled the huge crop of coffee on the farm, cleared the flowers after the heavy storms and much more. As we reach capacity over the coming weeks I am sure that there will be much more to report next month including our preparations for this year's turtle project, new mist netting sites, completion of the butterfly house, construction of the spider monkey release enclosure and lots more... so until then!