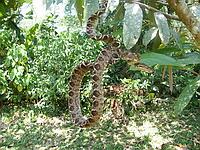 It is hard to believe that the time has come for another update from Taricaya and September has seen us improving and modifying the installations of the animal rescue centre including the completion of a fantastic new cage for Preciosa. Elsewhere we have been very happy to welcome back our botany expert Daniel Medina as we continue to investigate the flora of the reserve and work around the centre has included the continuation of our trail evaluation and plenty of graft at the pilot farm also. 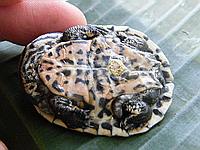 Preciosa, our resident jaguar (Pantera onca), has now been with us for a lot longer than I originally planned as getting release permits for her has become ever increasingly difficult. This meant that her perfectly adequate, albeit old, accommodation from her original acceptance was in need of upgrading and repair work. Whilst she had plenty of space in her old enclosure it was originally designed as temporary accommodation and as it appears she might well be with us for a while yet I decided to enlarge the enclosure as we repaired it. So as usual there was plenty of work for everyone as we started with the concrete support columns and brick base before adding a huge wooden structure. The result is an enclosure of 9x9x9m and she is now happily installed and exploring her new surroundings. Elsewhere in the rescue program I mentioned last month that we were planning on moving our juvenile male tapir into the large enclosure with the sub-adult female. The acclimatisation process is now well underway as the young male is living inside the large enclosure although separated from the female as they get used to each other. I hope to continue the process over the coming weeks and I am sure as the two individuals become used each other's presence the initial aggression from the older female will subside. The initial reaction was to be expected as the female considers the enclosure as her territory but tapirs are not aggressive by nature and I am very confident that they will soon be living side by side. 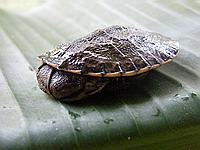 It is not often that after eleven years of working in the Amazon that I come across something totally new that I have never seen before but this month has thrown me a wonderful surprise. Nearly three months ago we started our turtle project and as we were building the first turtle beach Enrique, our Ese'eja neighbour, brought us a nest of turtle eggs that he had found by his boat. It struck us as very early in the year for these to be the eggs of the "Taricaya" (Podocnemis unifilis) but we duly buried them in the first quadrant of the newly constructed beach. We thought little more about them as we became increasingly occupied with our record year of nest collections. Anyway, a couple of weeks ago we were mildly surprised to have baby turtles emerging from the sand but to our surprise they were not side-necked turtles but a much rarer species of Chelidae. The Spotted toad-headed turtle (Phrynops geoffroianus) is only found in southern Amazonia and very little is known about its life history and behaviour. It is an allegedly carnivorous species feeding on insects and small fish and we were now proud owners of ten of these beautiful turtles. We decided not to release them immediately and now have them in a newly constructed terrarium as we try to investigate further their feeding habits in an attempt to learn more about these elusive Chelonians. Another first in the field of herpetology was the discovery of a beautifully coloured morph of an Amazon tree boa (Corallus hortilanus). Whilst we have captured a few of these arboreal constrictors over the years the skin colouration of this individual was spectacular and reminiscent of the much deadlier fer-de-lance. 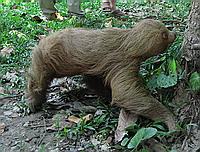 At the beginning of September we were pleased to welcome back Daniel Medina for his second visit of the year and the continuation of our research into the plants of the reserve. Once again he arrived full of enthusiasm and we continued to study line transects designed to produce information on forest structure and diversity. This time around we also banded and marked specific tree species in different habitats to measure growth rates and to investigate whether there is a seasonal variation in speed of growth. In addition Daniel shared his vast knowledge of the plants with us and I look forward to our continued alliance as I hope to establish studies into forest succession (regeneration of forest gaps) and eventually start climbing trees to investigate the high canopy and the epiphytes found in the tree tops.

As the dry season continues the forest is really starting to suffer with the lack of rain. Usually by this time of year the rains have started but we have not even seen a sniff of rain and the animals must also be suffering as the trees are unable to flower and ultimately produce fruits. The majority of the animals of the forest reproduce to coincide with the start of the wet season and the associated availability of food and so it will be tough for mothers and offspring alike unless the rains start in earnest. Unfortunately this does not look likely any time soon as we can generally associate our weather with what is happening further south on the continent and Argentina and Chile are both suffering a continued drought and heat wave. One of the few benefits of this prolonged dry spell is that we have been able to complete a sweep of all our trails and volunteers have been hard at work clearing all the storm debris from the last heavy rains and our extensive network of trails is now completely open again albeit until the rains start again!

Work has also continued at the pilot farm and the dam has been a saviour in the prolonged drought as we have been able to irrigate regularly. It was time to collect data from our mahogany saplings again as we needed to compare size to this time last year and check survival rates and growth percentages. I am pleased to report that we are still on track with this revolutionary project and the figures suggest that our initial expectations for this project are holding true. Elsewhere at the farm we have needed to maintain our nurseries of bamboo and saplings of various different tree species and our goats have had a very productive season as we now have several newborn kids in the flock.

October will see the birth of our first turtle nests, continued work on the animal rescue centre, the expected start of the rains and much more.....as ever I wish to thank everyone involved with the project as we continue to grow and evolve.