The time has come for the latest from the Peruvian Amazon and as ever I have plenty to report. September has seen us finish the mist netting surveys; receive new residents in the animal release program, the completion of the first phases of the new dining room construction and much more. 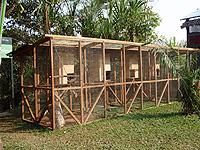 Many of you will recall the initial mist netting surveys of 2005/2006 and the rings that we attached to the birds we caught. These rings enable us to identify individuals should they be caught again in the nets and so track their movements around the reserve. Hence this follow-up study was designed to investigate these local migrations in the area. September saw us finish the last two transects on Roxanne trail and then finally near the Anaconda mammal colpa at the southern limit of the reserve. We were fortunate enough to capture many ringed individuals and now I have to process the data to follow their movements through the reserve. Apart from these ringed birds we managed to find two new species for our list, buff-breasted wren (Thyrothorus leucotis) and white-necked thrush (Turdus albicollis); and capture many species that we had been unable to photograph before, such as an undulated tinamou (Cryptorellius undulatus). The final transect saw us capture a total of 77 birds in just three days keeping us very busy recording species and measurements. It was almost enough to distract us from the heat, humidity and continual buzz of the ever-present insects and I must thank all the volunteers involved who put up with these uncomfortable conditions around the campsite. Once again their dedication never ceases to amaze me. 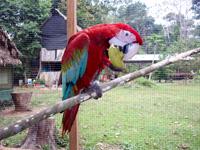 Back at the centre we welcomed some new residents to the release program and bid farewell to another. This month we received a red and green macaw (Ara chloroptera), a baby brown agouti (Dasyprocta variegata) and a tiny collared peccary (Tayassu tajacu). The completion of the juvenile enclosures in August meant that we have been able to quarantine the macaw and agouti in comfortable conditions whilst the very young peccary is still in the nursery. It has been a challenge to look after the peccary as it has to be force fed milk due to its very young age. Still she seems to be growing and the prospects look good for the youngster. Elsewhere we did some relocating of our existing residents due the release of the pale-winged trumpeters (Psophia leucoptera) last month. The trumpeters' cage is now home to our two Spix's guans (Penelope jacquacu) and the guans' cage is being used to house our four yellow-crowned parrots (Amazon ochrocephala). These large Amazon parrots have been with us for a while and so their flight feathers are starting to regenerate.

The extra space has enabled the birds to exercise more and daily they appear to be more active and their flight muscles stronger. It will still be a while before we can release them but their recovery will definitely be swifter with their new found space. The baby toucans (Rhamphastos cuvieri) were also becoming too big for their enclosure and so we took out the adjoining wall and expanded their cage as it now leads into the adjacent one which was empty. The toucans are also enjoying the extra space and as their feathers were never cut we just need to wait for them to grow a bit more before we can open the door and release them back into the wild. Still we were able to release one of our residents as we said goodbye to our only current reptilian resident, the red-tailed boa constrictor (Boa constrictor). We took the two and a half metre snake to the depressions near the canopy walkway and recorded its biometry (body measurements) before letting it go. The animal was in excellent health and no doubt has found a territory of its own by now. I am also happy to report the excellent progress of our second jaguar in the program. Many of you will remember the photos of the little jaguar cub that arrived earlier this year- as you will see from the photo she is no longer so little and is growing fast with her well-balanced diet. Her coat has a wonderful sheen and she is as playful and boisterous as ever.

For anyone who has visited a tropical rainforest one thing that always sticks in the mind is the constant humidity and this is responsible for the accelerated rates of rotting and decay in the jungle. After four years our next victim was the kitchen and dining room which is truly on its last legs as the conditions take their toll. Nonetheless we have started the construction of a bigger and better kitchen/dining room with a view over the river. The wood has all been protected and the roof is painted corrugated iron so this will have a longer lifespan and I am sure I will be reporting its completion in next month's update.

The farm project continues to flourish and this month we built a new nursery for an experiment with mahogany cuttings. We want to investigate whether mahogany plants that have shown resistance to the Hypsipyla moth (a parasite of young plants that stunts their growth) can be successfully cultivated from branch cuttings. If this proves successful then it will eliminate the necessity to search for seeds as wild trees are harder and harder to find as loggers take their toll on the forest. The added bonus is the trees will have a natural resistance to the parasitic moth that has been attacking our cultivated mahogany plants for years. Elsewhere the guinea pigs that we gave our neighbour Pedro Guevarra have started to reproduce. As with the goats, the guinea pigs were brought from the mountains to provide an alternative meat source for the locals. These quick reproducers will eliminate the necessity to hunt and improve the farmer's quality of life. Pedro's success with the sheep/goats has led him to try this project also and the first offspring bode well for yet another success.

That wraps it up for this month and I shall be back with more information as October will see the first of our baby turtles hatching, the completion of the new dining room and plenty more as usual.