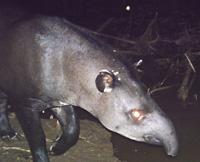 I must apologise for joining the last two months into one report but time has simply flown by and my travels have kept me very occupied. However, Taricaya has not lost any of its momentum and volunteers and staff have worked very industriously to keep pushing our projects forward. As usual, my dilemma is where to start.

After a record year in the collection phase of our turtle project, we keenly awaited the hatching of our first nests. We were very confident that we would have our highest number of hatchlings yet and we were not disappointed. With a grand total of 992 baby turtles the record was smashed and all the hard work over the summer months was justified. In fact we had so many youngsters that the turtle pool from previous years was dangerously overcrowded. The high concentration of animals meant that the water was constantly dirty with their natural waste and this, coupled with a very dry spell of no rain, meant we could not recycle the water as often as necessary. The dry weather also meant that it was very hard to collect the water lentils that form their natural diet as the depressions around the reserve are still without water. Thus we took the decision to release the baby turtles earlier than in previous years and now they are all successfully released back into the rivers and streams around the reserve. For next year we shall have to build a second pool as I expect the project to continue to flourish and improve as it has every year thus far.

A new initiative in October saw us installing motion-sensitive cameras at various points around the reserve. The goal of this new project was to help us increase our database of mammal sightings as this group of animals is the least studied thus far in the Taricaya Reserve. Our platform observations generally produce results for just birds and that coupled with the mist netting has provided us with a huge spread of data for the avifauna of Taricaya. The herpetology walks and traps have done the same for the reptiles and amphibians of the area whilst the butterfly traps and nets have done the same for the third most diverse order of insects. This meant we wanted to discover more about the diversity and movements of the mammals around the reserve. Over the years we have sighted the majority of mammal species expected to be found in this area but often the rarer animals have been spotted infrequently and their nocturnal lifestyles have made the task even harder. Initially we decided most productive position for the cameras would be near the small mammal colpas we have in the reserve. These colpas are specific sites where mammals come to eat clay that in turn helps them digest food with high levels of toxins. This peculiar habit is well documented in birds, especially the parrot family, but less is known about the behaviour of mammals and the frequency with which they visit these colpas. 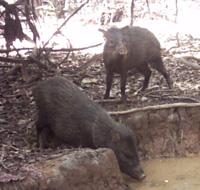 Whilst we have only just started this project we have had some fantastic results and some great photos also. Early studies have captured on film a giant anteater (Mymrecophaga tridactyla), red brocket deer (Mazama americana), collared and white-lipped peccaries (Tayassu sp.), brown agoutis (Dasyprocta variegata), a paca (Agouti paca), a Brazilian porcupine (Coendou prehensilis), a tapir (Tapiris terrestris) and some yet to be identified bats! There were even a couple of avian species: pale-winged trumpeters (Psophia leucoptera) and a hook-billed kite (Chondrohierax uncinatus) feeding on its favourite prey; snails. Interestingly we caught the same pair of collared peccaries visiting a small colpa/mud bath more than once in the same week and this is very encouraging as with time we hope to accumulate enough data to track the animals around the reserve and also by marking the animals we release it will become easier to identify the individuals caught by the cameras. This is a very exciting project that promises to give us plenty of surprises over the coming months and naturally I will keep you all informed.

The theme of releasing animals brings me nicely on to our latest arrivals in the animal rescue centre. Over the last few weeks we have received some young newcomers and moved some of our other residents around as the program continues to flourish. The first to arrive were a couple of night (or owl) monkeys (Aotus sp). An adult arrived first and was in surprisingly good health but the juvenile that arrived soon after was in very poor shape. It had been attacked by a dog in Puerto Maldonado and had wounds on its head, face and tail. I am very pleased to report that with careful treatment it has made a full recovery and is now happily united with the older monkey in the new quarantine enclosures. It is very uncommon for us to receive rare mammals but for the second time this year we were grateful recipients of another baby Brazilian tapir (Tapirus terrestris). It is another female and fortunately in much better health than Winnie was when we received her earlier this year. She continues to grow and appears much shier than Winnie when she first came to us. This is a positive thing and will help her rehabilitation as a fear of humans will help her should she stray from the sanctuary of our reserve. The new arrivals meant some reshuffling was necessary of existing residents and the baby tapir has taken residence in the Spix's guan cage whilst the birds were relocated to the curassow enclosure. The new room mates seem to be getting along handsomely. Elsewhere the baby collared peccary has survived its early time with us and has been moved to one of the outdoor juvenile cages. It is always hard to manage such a young animal and the constant care and attention was well worth the effort as he is now happily running around and enjoying life outside in its new cage!

It is always with a heavy heart that I have to report a death in our release program but unfortunately our young red howler monkey (Alouatta seniculus) has not survived. This came as a shock because it was the first resident of our newly designed juvenile enclosures and the youngster was active, well-fed and responded well to the stimuli of being outside. The baby had been with us for over six months and was thriving then suddenly its health began to decline almost overnight and it then it passed away. The absence of vets specialised in exotic fauna in Puerto Maldonado means that a post mortem was futile but I am intrigued as to the cause of death because of all the animals we have received over the years; howler monkeys have been our Achilles' heel. I have researched diet and behaviour and have followed all recommendations but to no avail. The other interesting factor is that they survive sometimes for over a year and then suddenly their health suffers. Howler monkeys are naturally herbivores and we have tried diets of leaves etc... but I have seen wild howler monkeys feeding on palm fruits and farm-grown bananas and papayas. Indeed, our captive animals prefer these fruits to tough un-nutritional leaves. This leads me to think that diet is not an issue as their demise would be a lot swifter than the six-twelve months when they appear fine. I think it is more a behavioural/social problem. We have yet to have more than one howler monkey at any give time and these large primates live in big family groups where the youngsters will be tended by all the adults during its infancy. This lack of social contact might well be causing the animals to suffer. Whilst our residents are in contact with us and can see all the other animals around them this cannot replace the social bonds of a family unit. I am further convinced that this may well be the case as our white-bellied spider monkeys (Ateles belzebuth), another large monkey which lives in family groups, are thriving as a group and the younger monkeys are now fully integrated into the social hierarchy. I am determined to try and receive several howler monkeys at once to see if this bonding can help their survival. The only problem is that these monkeys are not that common and dwell high in the canopy so the chances of receiving several at once are slim; so fingers crossed for the future.

As usual the start of the wet season heralds the first major storms of the year and our trail system suffers with the falling debris from the canopy. Nonetheless our volunteers have been working tirelessly to keep the trails open and at the same time we have started to map them with our GPS. The trail system has always been well signed and marked every 25m but now we have decided to try and be a little more precise and create a completely accurate map on the computer. It is a long job and often only small sections can be advanced at any one time as the trails have a tendency to curve continuously due to the natural contours of the land and major obstacles such as huge immovable trees! Still we have made good steady progress and I hope that the majority of the network will be mapped and logged before the New Year. I will keep you posted!

The pilot farm project continues to prosper and the birth of a baby donkey at Pedro's farm was good news. He now has donkeys, goats and guinea pigs as livestock and coffee planted around his land. A request for flowers next month further encourages us as the locals start to realise the benefits to be had working with us and that we are genuinely serious about improving their standard of living. Our sphere of influence is ever growing and this will only increase with our visit to the Peruvian Ecological Conference in Arequipa. I will report on this event next month along with all the other news from the Peruvian Amazon.