The time has come once again to update you on the latest goings-on at Taricaya but before I start I am pleased to announce that we are set for a record year in the jungle as we have officially received reservation number 115 for 2006 and the number keeps rising. With such huge interest in the project it is hardly surprising that we reached capacity earlier this month and have had to build a new bungalow at the centre to accommodate the extra volunteers. With one bungalow finished and another on the way it is fair to say that life in the Amazon is as hectic as ever. The problem with the update, as usual, is where to start?!? 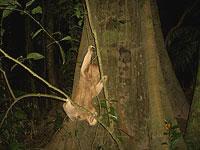 At the very start of May it was time to pack our bags and head off on our biannual trip up the Tambopata to the world famous parrot/macaw clay lick. As on previous excursions to the Colpa (clay lick) the trip was spread over four days with the first night spent at "El Gato", the second at the "Chuncho Colpa" and then the final stop at the larger clay lick "Colpa Colorado". This left the fourth day as a full day's boat ride downstream back to town riding the strong currents as opposed to fighting them as on the first three days. The weather was kind and, fortunately, the new tents were not put to the test of a true tropical deluge. "El Gato" waterfall always provides us with a great spot to rest on the first evening and after swimming and dinner it was an early night as we left civilization further behind on day two. The "Chuncho Colpa" turned out to be more active than the larger Colpa further upstream and the volunteers were treated to both a visual and audio display from various different species of parrot and macaw. Disappointingly, the final stop at the Colpa Colorado did not provide the abundance of bird life we had seen on previous visits but nonetheless some birds did visit the clay cliffs towering in front of us and the adventure of camping three days from Puerto Maldonado meant that a good time was had by all and our second trip later in the year will give other volunteers a chance to experience the wilderness of the Tambopata-Candamo National Park. 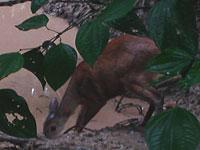 Not long after returning to the centre we were off again, this time to Lake Sandoval. The lake is about 40 minutes upstream from Taricaya and the main attraction is a family of giant otters (Pteronura brasiliensis) known to inhabit the lake. These are the largest members of the otter and weasel family (Mustelidae) and can reach two metres long including the tail. The trip was just an overnight one with accommodation in a rustic lodge run by a local family I have known for years. Upon arrival we took boats out on the lake and enjoyed the sunset accompanied by a wide variety of resident birds and an inquisitive family of brown capuchin monkeys (Cebus apella). The next morning we were back on the lake at dawn to encounter wildlife around every corner (herons, kingfishers, macaws and bats. to name but a few) but alas no giant otters. After a leisurely breakfast we decided on a swim before heading back to Taricaya and, amazingly, out of nowhere appeared the family of giant otters cruising across the middle of the lake. They were in no rush and the volunteers got to spend a priceless half an hour watching the adults fishing whilst the youngsters seemed much more interested in frolicking in the water than the food regularly offered them. 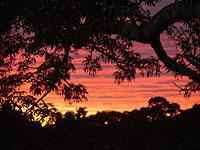 After two such amazing trips you would be forgiven for thinking that there was little or no time for some honest hard work at the centre itself but the opposite is true. Suitably revitalised after the breaks the volunteers attacked the work at the lodge with gusto and the projects continue to proceed as planned. The animal release program has continued to receive the lion's share of our time and we now have two brand new macaw enclosures and a remodelled enclosure for the pale-winged trumpeters (Psophia leucoptera). The four blue and yellow macaws (Ara ararauna) have moved into their new home, temporarily accompanied by the three chestnut-fronted macaws (Ara severa) whilst the three scarlet macaws (Ara macao) have moved into the other new enclosure accompanied by our baby paca (Agouti paca) who had chewed a hole in the curassow enclosure. You would be justified in thinking that maybe a cage full of large-beaked birds is not necessarily an ideal environment for a young rodent but the paca is nocturnal by nature and spends the day tucked up in its nesting tube and becomes active whilst the macaws sleep at night. The accommodation is temporary as we are planning on building a rodent pen after completing the small parrot cages next month. In this cage the paca will be joined by our latest resident in the animal release program; a baby brown agouti (Dasyprocta variegata) currently being housed in the nursery.

Elsewhere in the animal release program we received two new primates; Wally, a white-bellied spider monkey (Ateles belzebuth chamek) and Lucas, a brown capuchin monkey (Cebus apella). Plans for June include modifying the old macaw enclosures and converting them into one large enclosure for the primates giving them plenty of space to play whilst providing enough space so that the different species can keep out of each others hair (or fur in this case!) until new mammal enclosures are built later in the year.

It is with great satisfaction that I can now report on the conclusion of the mist netting and bird investigation project. By the end of the twelve study weeks Mauricio and I have successfully captured and ringed 519 birds from over 60 different species. Now we must start with the data interpretation with the goal of presenting our findings at a prominent ornithological conference in Venezuela at the start of next year. I am very optimistic that we will create a stir, albeit a small one amongst such bird-watching greats, as Taricaya appears to have several species either considered exceptionally rare in Peru or not previously noted in the region where we are located. Either way the hours spent checking nets, the countless injuries from furious captives and the inescapable insects cannot deter from a truly great achievement and hopefully an equally significant one that can put Reserva Ecologica Taricaya on the map within the relevant circles.

I would be amiss to finish this report without mentioning two fantastic sightings in the reserve over the last four weeks. I cannot take credit for the photos as I was not fortunate enough to be with the specific groups at the right time but some very lucky volunteers saw a Hoffmann's two-toed sloth (Choloepus hoffmanni) on a night-walk whilst others saw a red brocket deer (Mazama Americana) at Anaconda Colpa.

June promises another month of hard work both at the farm and with the animal release program and perhaps more excitingly we will receive a herpetologist from Arequipa, Daniel Neira, who will help us initiate a reptile/amphibian investigative project similar to the bird study with similar goals of finding out what we really have at Taricaya in the form of snakes, lizards, frogs toads, etc...We will also receive the Global Vets of 2006. Last year's students were very helpful with our application to the Peruvian government for status as an animal rescue centre (we are still waiting for the official go-ahead 12 months later!!!) and I am confident this year's group will help us with our farm residents (goats, sheep, donkeys and guinea pigs) and our neighbours animals also.