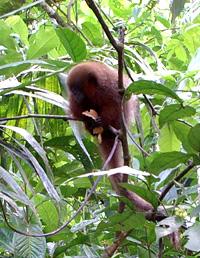 I must first of all apologise for the delay in bringing you all the latest news from the Peruvian jungle. A trip to the UK for Christmas and the tragic death of Eugenio's son, Mouglas, meant that December and January were hectic to say the least. I am sure that all of you who know Eugenio will join me in wishing him, and his family, all the best in these difficult times and I am pleased to report that he is back at work and trying to put the tragedy behind him.

Back to business and the end of 2005 saw us with two hardy volunteers over Christmas ready to start the challenge of a new year but work still needed to be finished before the festive break. The heavy rains came with a vengeance and the river soon rose to the level of the bridge crossing the creek. The early signs were that we could have been in for some flooding, reminiscent of 2003, but fortunately the level did not keep rising and we stayed dry for another year!!! December saw the continued clearing of trails, a mandatory task after heavy storms, and maintenance work at the farm as the rain, so welcome to our plants, was also well received by the many species of weed just waiting to spring up and choke our heliconia plants. Whilst this could sometimes appear to be an endless task we also had time to receive some wonderful new residents in the animal release program.

December saw us receive two firsts for the program in the form of three Pale-winged Trumpeters (Psophia leucoptera) and three Razor-billed Curassows (Mitu tuberosa). Both these species are large and terrestrial and hence the first birds to be hunted in any particular area. We have been fortunate enough to spot trumpeters in the reserve once before but never curassows. Whilst it is impossible to distinguish male and female individuals in bird species that do not display sexual dimorphism (male and female look different) I am hopeful that we have a breeding pair in each species that upon release will help to repopulate the area. The new populations will not have the constant threat of hunters as they will occupy their niches currently available in the reserve. 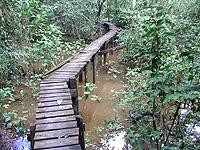 The other new resident in the release program was one of my personal favourites, an ocelot (Leopardus pardalis). The youngster, whilst being a bit temperamental, is friendly most of the time and is easy to manage. As with all animals one has to learn to respect their moods just as we would with our fellow humans and volunteers and staff alike quickly learned when to enter the cage and when to surreptitiously place the food just within the door whilst others distracted the animal from the other side of the enclosure. A few minor scratches from boisterous playing are the worst injuries to date and the ocelot will be very happy when released into the reserve. As a precaution we have already fitted a radio collar so should there be an impromptu bid for freedom we will be able to monitor its activities in the area.

And so 2005 came to an end and with it innumerable successes made possible by the hard work of volunteers and, of course, the dedicated staff at the lodge. It was a year that saw the dam finally operational and pumping water 24hrs a day to both the lodge and for the irrigation of the farm; it let us receive our first visitors from other lodges keen to experience the canopy and spend a while with Preciosa; the inauguration of the bird monitoring project and its successful presentation in Chiclayo; the successful hatching, marking and release of over 500 young turtles; the first of our now annual visits by the Global vets from Canada and so the list continues... What could 2006 do to better such a fantastic year? 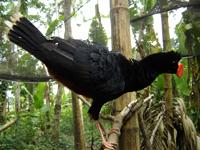 Upon my return from the UK I was pleased to see our first volunteers of the New Year hard at work and already into the swing of things at the lodge. The heavy rains, as usual, had started to turn the depressions throughout the reserve into temporal swamps and our now 3-year old bridges had rotten away. So it was back to basics and repairing the three major bridges on Mullet trail to provide access to the canopy and the H.O.B. blind so daily observations could continue as normal. To avoid facing a similar problem in three years time we have re-designed the bridges using similar materials (aluminium planks) to those used in the construction of the canopy walkway and hopefully this will prolong, if not prevent, the eventual rotting of the bridge.

The repairing of bridges is a task that cannot be avoided and such maintenance as with that of platforms, buildings and trails is unavoidable in such a humid environment but what of the longer term plans for 2006. You will have noticed that in 2005 there was a definite bias towards making the pilot farm fully operational and self-sufficient. That goal was successfully reached and 2006 will see the turn of the animal release program. I am continuing to struggle with the Peruvian authorities to get all the necessary permits to convert Taricaya into an officially registered rescue centre. I am confident that this year we will be awarded this status and so we have to be ready for a greater influx of animals into the program. The official status signifies that INRENA (natural resources branch of the government) will start to give us all the confiscated animals from Puerto Maldonado and as such we need to implement a better system of management for the animals.

Unwanted pets bring the risk of disease from Puerto Maldonado and so we need proper quarantine facilities to prevent infection of our other resident animals and much more importantly, the local populations in the reserve. We will need more cages for the animals that require longer term care before release, a nursery for very young animals just separated from their mother and a new module at the border of our reserve with the national park which will be our release site. The location of this release site has been chosen carefully because by releasing our animals at this point they are guaranteed safe passage whichever direction they choose to leave as they will enter either the Reserva Ecologica Taricaya or the Tambopata-Candamo National Park.

January saw the first phase reached as the nursery for infants was completed. The new module next to the river is already host to a young paca named Bianca (Agouti paca), a dusky titi monkey, Piet (Callicebus moloch brunneus) and Atila, a young white-bellied spider monkey (Ateles belzebuth). These youngsters require more attention and are fed three times a day by the volunteers responsible for them. It is just a start but the program is definitely moving in the right direction and I am confident that 2006 will see us implement a fantastic system for the management and release of our resident animals and the visit in June by the Global vets will be instrumental in helping me provide the necessary documentation to the government to obtain, at last, the official permits.