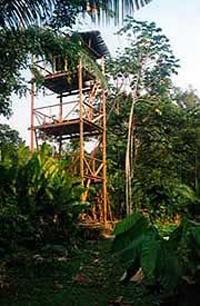 It is with great pleasure that I report to you this month the first successful hatching of our turtle eggs. The young "Taricayas" that we rescued earlier this year finally hatched in October and we now have over twenty baby turtles at the Centre. The young turtles are currently in a man-made pool covered in surface plants that constitute their main diet at this age, they are thriving and we hope to raise them all to a suitable size before release back into the wild. However, there were many fatalities in the eggs due to a parasite known locally as " perrito de dios " which infects the unhatched egg and causes the embryo to die. It is a widely known problem in the area and next year we shall try and reduce the mortalities with different management techniques of the eggs and different designs of the artificial beach. I have also presented a letter to Inrena to allow us to have a larger participation in the turtle rehabilitation project next year. We will have access to more beaches in other areas and with the success of this year the prospects are very encouraging with the long term goal to start the repopulation the rivers and lakes in our area. 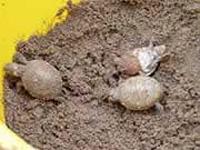 The turtles were not the only success during October as the volunteers continued their regular activities and the canopy walkway and new platform at the farm have continued to provide us with many great sightings. The canopy platform has given us constant sightings of several large eagles and hawks which hopefully will start to build nests in the area. Most of the bird species look to start nesting around this time so that the young chicks hatch in the wet season when food is more readily available and hence survival chances are higher. Last year we had a pair of Hook-billed kites nesting very close and we hope to see more nests this year as we are now more familiar with the immediate area around the platform and have a much bigger data base to connect constant sightings to possible nesting pairs. 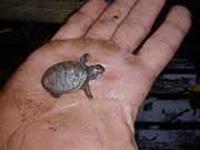 The mahogany project encourages me more as the months go by, the newly transplanted saplings are doing very well and the quick growth suggests that we will be able to enter the third phase of final relocation as soon as February next year. The plants need to reach an optimal height of 60cm and the fresh rains are helping the plants grow straight and healthy. The farm has also been producing many vegetables and fruits. This month alone we have sampled spring onions, avocados, bananas, pineapples, cabbage, tomato, pumpkin, cherry tomatoes, hot chilis, sweet chilis, limes and papaya.

The residents in the animal release program are all in good health and in October we received a first for us at the centre. We were given a young male tayra ( Eira Barbara ) which is a member of the Mustelid family, the same as the otters and weasels. These animals can grow to over a metre in length and we often see them around the farm feeding on papayas and bananas. 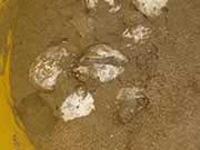 Their versatile diet means that we should have no trouble in raising him from such a young age and I am sure that he will soon become independent and able to feed himself.

As we come to the end of the dry season life at the centre will change slightly, it will not be long before we are back in the canoes for observations and the creek will rise to cover all the hard work of the dam until next year but spirits are high and in November we plan a trip to an area known as Laberinto to collect bamboo saplings to start yet another initiative that I will share with you next month.