Hi everybody! I want to wish you all a Happy New Year 2014, and hope you all have incredible adventures and amazing wildlife sightings in the upcoming year! Your job, as a volunteer, is really important to us and the Projects Abroad team from Nepal would like to thank you for all your contributions and wish you all the best for 2014. 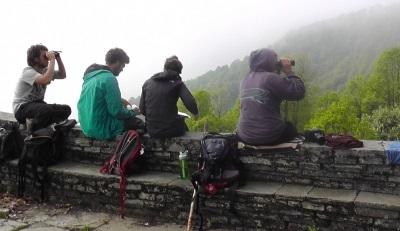 December 2013 and January 2014 have been an incredible two months. It’s still fairly cold at night but during the day the warm sun is a real pleasure. During the past 2 months, we continued our Mammal survey in the Dobato area and captured some good pictures of different species and not to mention, had some fun in the fresh snow!

The birding survey is still bringing in a lot of new species (9 in January/December) with the migration of the birds from higher altitudes (altitudinal migration). We also discovered a new species in the local area, thanks to our cameras traps: the shy and elusive Indian Crested Porcupine (Hystrix indica).

And of course Christmas and New Years have been a new and incredible experience for all the volunteers and staff. The lack of a traditional Christmas tree didn’t faze us as some of the volunteers set about making a tree out of bamboo, ferns and duct tape. In remote areas, imagination is always good to have!

The field trips to Dobato continue and we have been able to spot (thanks to our remote cameras traps) several mammal species including: Himalayan black bear (Ursus thibetanus) several barking deer (Muntiacus muntjak) and a herd of 7 Common Ghorals (Naemorhedus goral). We have also been able to capture several bird species: Indian Blue Robin (Luscinia brunnea), White-throated Redstart (Phoenicurus schisticeps), Black Faced Laughing Thrush (Garrulax affinis), and the Himalayan Monal (Lophophorus impejanus), which is the national bird of Nepal.

After the hard, long hike up to 3600m and the following hikes to set the cameras, nothing beats relaxing in the comfort of a warm fire and the sweetness of good Masala tea (typical Nepali tea). The last trek up there, proved to be a once in a year trek, with the snow reaching up to our knees and even thighs in some parts! Despite the hard walk, we had some fun and left about 10 snowmen in our wake to welcome us on the way down. For some of us, it was our first time in the snow.

Similar to the October/November survey, the December/January bird survey brought us numerous new species. It seems that every time we head into the field we spot a new species for our list. This is due to the fact that the cold weather at higher altitudes is forcing some bird species lower down on the mountains in an attempt to escape extreme temperatures and harsh conditions. Additionally, food is more plentiful on the lower slopes. This, coupled with the climate conditions has made our research very exciting this month as more and more birds take refuge from high altitudes heights.

A new species have been found during our mammal survey, the Indian Crested Porcupine (Hystrix indica). Its long quills, which are a remarkable defensive weapon against predators like the Common leopard (Panthera pardus), make it is easy to identify this nocturnal animal. The porcupines gnaw bones and antlers found in the forest to receive minerals and vitamins, and they also eat roots, fruits etc.

According to the IUCN (International Union for Conservation of Nature), the Indian Crested Porcupine is not a threated species, its population is stable, and it can be found in a wide range of habitats (rocky hillsides, tropical and temperate shrubland, grasslands, forests, arable land, plantations, and gardens). It has a geographic range from the Eastern Mediterranean through to southwest and central Asia, and in the Himalayan Mountains, they can reach altitudes of up to 2400 meters.

In January we did some anti-poaching close to the village. The volunteers found several snares and traps designed to mainly catch ground birds. These have all have been destroyed and the authorities (Anapurna Conservation Area Project and the Forest Guide of the Conservation Area Management Committee) have been informed. More anti-poaching campaigning will be done during the next month targeting the wild area close to the village.

Christmas and New Years in Nepal is a unique experience! The volunteers celebrated with a homemade Christmas tree, a delicious feast and a visit from a Nepali Santa Claus! Christmas up here was certainly a different experience but definitely a highlight! New Years was celebrated down in Pohkara at the street festival with some volunteers from Chitwan.

I look forward to bringing you more news next time… 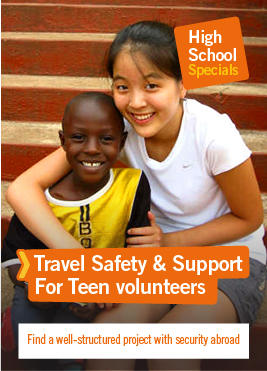