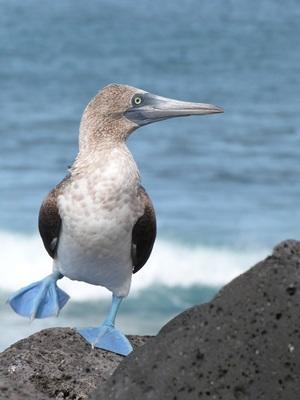 This year we finished as we started, working hard for the conservation of animals and plants endemic and native to the Galapagos Islands. We focussed the majority of our work on the control of introduced species, reforestation of areas affected by such invaders as the “mora” (Rubus niveus) and monitoring the island’s fauna including the marine iguana (Amblyrhynchus cristatus), Galapagos sea lion (Zalophus wollebaeki) and the wide variety of birds found in the coastal areas. Our environmental awareness programmes have been working well and the community has become involved in several of our conservation initiatives.

We have begun work to control the “mora” plants on the higher regions of the island where the Galapagos petrel (Pterodroma phaeopygia) nests are suffering as a result of animals such as rats, pigs and cats whose numbers are increasing. The “mora” is outcompeting native plant species and as we work in the area we perform two tasks in parallel. We monitor petrel nests for signs of rats and if detected we place venom in the area at a distance of 3m from the nests. Simultaneously, we try to remove as much of the invasive plant as possible to facilitate the return of endemic plant species such as Miconia robinsoniana. I hope that our efforts will help the marine petrel recover and see its numbers return to levels before the human impact brought foreign predators to the island. 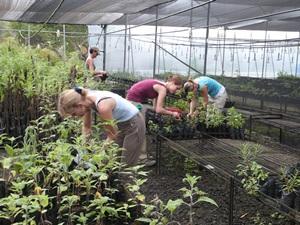 At the giant tortoise breeding centre we are continuing our efforts to eliminate the “supirrosa” (Lantana camara) and monitor the animals in the process. This thick invasive plant is invading the tortoise breeding and nesting sites and is making the collection of eggs for captive rising more difficult. We continue to help in the control of the animal’s diet and the residents appear to be in good health and active in the centre.

On Cerro Colorado we continue our upkeep of reintroduced plants as we strive to regenerate the hill’s ancestral habitat with a forest of endemic plant species. Our initial fears that the ecosystem had been seriously damaged were further supported as we began our bird monitoring study and found a very poor number of individuals barely surviving on the severely damaged habitat. 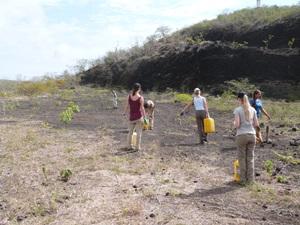 Back in the plant nursery we are cultivating plants from the different climatic zones of the island as we prepare to expand our reforestation work to these areas. We are continually preparing compost for the endemic plants and coffee saplings designated for families based within the island’s agricultural sector.

We have been encouraging organic farming techniques on the different ranches on the island’s high ground to encourage people to stop using chemical pesticides and other liquids which harm the island’s ecosystem. Our goal is to raise environmental awareness and hope that the families we work with will pass on their experiences and newly gained knowledge to other families in the sector and slowly we can change farming techniques and conservation attitudes. 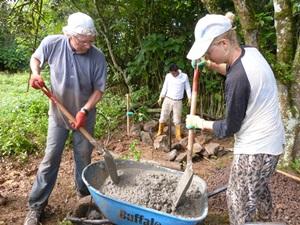