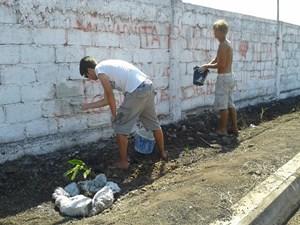 The activities and projects dedicated to the conservation of the flora and fauna of San Cristobal continue at a good rhythm thanks to all the hard work of our volunteers and staff. We continue to work on our long term projects, such as the sea lion (Zalophus wollebaeki) and marine iguana (Amblyrhynchus cristatus), monitoring programmes in parallel with our bird censuses from different observation points.

Elsewhere we continue our work in the Giant Tortoise Breeding Centre (Chelonoidis chathamensis) where we continue to feed the residents, clean their pools and battle the encroachment of invasive plant species from the surrounding area. This month we were able to help in the population census within the extensive grounds of the centre. We had to catch, weigh and mark all the tortoises found in the sanctuary and this way we can monitor their health and growth based on the data from previous surveys. Volunteers were then presented the formidable challenge of building a stone and rock wall to separate a young adult tortoise rescued from a nearby farm. It is very unusual to find the giant tortoise outside of the protected areas and this was very exciting. The adult appears to be about 20 years old and must be kept in quarantine until we can be certain that it has contracted any diseases by being in contact with domestic animals. 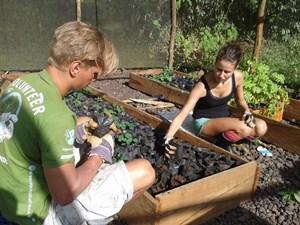 On Cerro Colorado we checked the saplings of endemic species that we had planted several months ago- weeding and watering where necessary. The higher success rate we get the faster we can hope to regenerate the recover areas affected by foreign plants.

We helped also in the Galapagos National Park plant nursery by preparing compost for seed germination and by tending to the endemic plants already growing in the nursery. These saplings are destined for reforestation projects and for donation to local communities for the recovery of their green areas.

In our nursery we have coffee plant saplings ready for our work in local farms. The idea is to help the farmers operate using purely organic techniques and in return for our help we are able to reforest areas of their land with Scalesia pedunculata, an endemic species. This species can be planted with the coffee to no ill effect and will help combat the ongoing threat of the invasive plant species, mora (Rubusn niveus).

Also in our nursery we have been working hard on germinating the seeds of a native tree known as “matarzno”. This tree has commercial value and so has been slowly disappearing from the islands. We headed off into the island’s dry forests to collect seeds from wild trees. The resulting saplings will be used for reforestation in the protected areas of the island and also given to the local communities so they may be planted in parks and schools so that we continue to have seed producing trees in all areas of the island. In conjunction with this project we have been working on clearing and signing an interpretation trail around the nursery explaining the native plants we are targeting for the projects of reforestation. 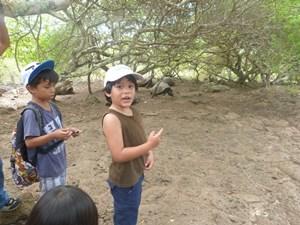 This month we have been working hard in the school summer camps teaching children about environmental issues. They are the future of the Galapagos and we introduced ideas such as recycling, use of water and the flora and fauna of the Galapagos. We headed field trips where we took the children out on the island and explained about conserving wildlife. We also took them to the giant tortoise breeding centre where they learnt more about their heritage and the plants we find on San Cristobal.

We are also involved in the Shark Campaign where we give talks and presentations to children about the species and their importance in the marine ecosystem. We also show educational videos to raise awareness of these animals and their plight due to hunting.

We performed extensive clean ups in the areas around the boat docks where most rubbish is found. Then we moved to our research sites and cleaned there also. The tides of the sea continually wash up rubbish and it is an ongoing task to keep the beaches clean and hazard free for the island’s wildlife. We also helped repainting signs and notice boards which present conservation ideas and mark out the park’s trails. 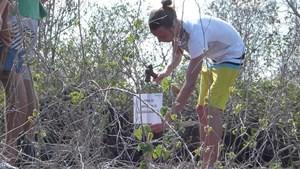 The tortoises under our care are healthy with a good weight and are growing well whilst displaying no signs of disease or dietary issues.

The saplings we planted on Cerro Colorado are doing well and the area is strating to look green and healthy again.

Our beach monitoring sites are clean and the study species are healthy with no apparent fatalities.

We have successfully undertaken environmental education where children have learnt the importance of their natural resources and wildlife endemic to the island.