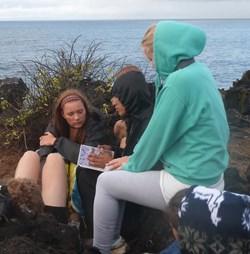 Our work conserving the unique ecosystems of Galapagos has continued this month and we have been working closely with the National Park Agency (PNG). We have been concentrating a lot on the eradication of introduced plants, such as the “supirrosa” (Lantana camara). Cerro Colorado is an area where the endemic plant Legocarpus darwinii is historically found, but which now borders on extinction. We have been clearing away the introduced supirrosa and reforesting the Legocarpus from the nearby plant nursery. We have been working with the national parks to cultivate saplings and have had a good success in germinating the seeds.

In addition to the Legocarpus we have been working in the park’s nursery, growing many other native and endemic species of plant. We produce our own compost in large plastic sacks, which we use to plant both seeds and saplings that will later be transferred to many areas under attack from invasive species. We have been clearing trails around the nursery and been heavily involved in its upkeep and day-to-day operation. 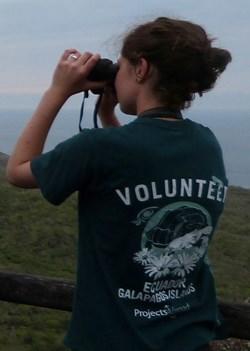 At the Galapaguera tortoise breeding centre, we have been feeding the giants and carefully controlling their diet. Large adults receive different quantities and plants from the juveniles and fortunately their natural inclination to co-habit with individuals of a similar age means we can simply place the different meals at the relevant sites within the large two hectare enclosure. We have been cleaning their pools where they drink and rest, to escape the heat, and have been removing invasive plants form their preferred nesting areas.

Higher up the island in the rocky hills we have been working hard to eliminate the rat populations, which prey on the eggs of the dark-rumped petrel (Pterodroma phaeopygia). These birds are under threat and are protected by international law and the arrival of humans and their increasing activity has caused a boom in rat populations (Rattus rattus) and scavenge on young birds and eggs of the petrel and, of course, many other species found only in Galapagos.

Back in Puerto Baquerizo we helped out in a school that hosts some of our fellow volunteers by reforesting with saplings of two endemic species of plant (Legocarpus darwinii and Scalesia pedunculata). By giving the school a wild garden to tend and cultivate we hope to install sound conservation principles in the young children who hold the future of the island in their generation. We also pitched in and helped them paint one of the classrooms, which was in serious need of a face-lift! 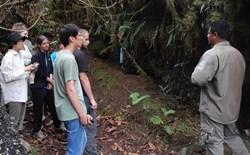 On 29 September we joined forces with some local institutions to do a beach clean-up. The aim was to raise environmental awareness in the community and the activity was run jointly by the National Park Agency, the Ecuadorian Navy and local dive schools. All the rubbish collected was separated and taken away for recycling.

We have been working hard on our own plant nursery also and we have been building the germination beds ready for the plant bags with seeds. This secondary nursery has been created with the aim of working closer with the local community in reforesting areas such as parks and schools. The larger government nursery where we help out produces plants solely for reforesting the national park itself. 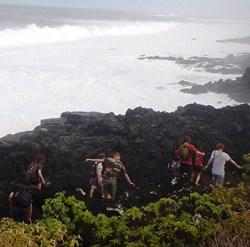 Continuing our on-going research we performed several animal censuses this month with the two species of interest the endemic Galapagos sea lion (Zalophus wollebaeki), and marine iguans (Amblyrhynchus cristatus). All the data was entered into our newly generated databases.

Elsewhere we have been working with a farming community making compost to reduce their usage of chemicals, which can harm the ecosystem. Farmers are often open to new ideas, but lack both time and funds to do anything other than the things they know. To help strengthen our relationship with the community we helped build an outdoor bathroom for a very poor family.

As we continue to work hard, the community is becoming more aware of our efforts. This is essential if we are to get them on board and aid our efforts to keep the Galapagos safe and how it has always been….