Volunteering in the Galapagos Islands with Projects Abroad is a gateway for you to experience living and working in one of the most naturally diverse environments on earth. In fact, Ecuador has been named by ecologists as one of the world’s “mega-diversity hotspots” and the Galapagos Islands, which are 1000km (621 miles) off Ecuador’s Pacific coast, are home to hundreds of unique species of flora and fauna. This varied range of wildlife is famous for helping Charles Darwin formulate his theory of evolution.

Our volunteers live and work in the town of Puerto Baquerizo Moreno on the island of San Cristobal in the Galapagos archipelago, where they work closely with the Galapagos National Park to help protect endangered species.

One of the greatest threats to the Galapagos Islands is the alien species of plants and animals brought in on boats and planes by humans. These alien species compete with indigenous species for resources and this often results in the decline of indigenous species, some of which are endemic to the Galapagos. Unless action is taken to reverse this trend, we could lose these species forever. 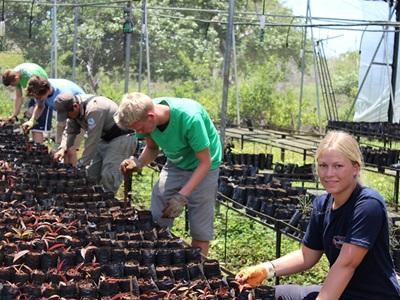 At the Galapagos Island Conservation Project, we work in partnership with the Galapagos National Park. The overall aim is to contribute to the conservation and preservation of the unique and abundant marine and terrestrial ecosystems through crucial research and practical hands-on work.

You have a vital role to play at this project by getting involved with a wide range of activities, such as eradicating introduced species, beach clean-ups, and species population monitoring. This will involve hiking to areas where the animals can be found and collecting data during animal observation.

Most of our monitoring work focuses on sea birds, particularly the Galapagos Petrel, an endangered sea bird that is endemic to the Galapagos. This bird is unique and builds its nest in specific habitats dominated by the native Miconia plants. However, human settlements have introduced invasive species such as the blackberry and guava tree. These are out-competing the Miconia plants and a second intruder, the black rat, is destroying nests and feeding on eggs and chicks. 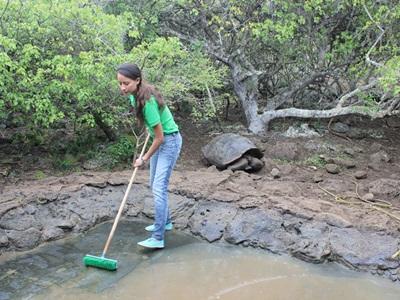 You will also have the opportunity to work at the Galapagos National Park’s giant tortoise breeding centre. This is the only protected area on the islands where giant tortoises, which are endemic to the Galapagos, are kept safe and bred. Here, you will assist with locating nests, cleaning ponds, feeding, removing invasive plant species, and general maintenance of the reserve. In addition, the National Park performs population surveys, which volunteers contribute to by collecting biometric data.

Volunteers also have another role at the breeding centre. Projects Abroad is responsible for a two hectare plot of land at the centre and volunteers help with cultivation and maintenance. This land produces the otoi plant, which is an important part of the tortoises’ staple diet. The goal here is to reduce the cost of the centre to the park service by making them self-sufficient.

Habitat restoration work also plays a major role in our volunteers’ work on the island. Projects Abroad maintains a nursery that focuses on producing indigenous plants to be introduced throughout the island. Some of your time as a volunteer will be dedicated to eradicating invasive species and replacing them with indigenous species grown at our nursery. We are working with many endemic species but are concentrating on mangrove trees which are essential to the coastal regions of the island.

The local community is a significant part of conserving the future of the Galapagos Islands. Therefore, one of the most important responsibilities of our volunteers is to work together with local people. One way of doing this is by becoming involved in education programs designed to deliver the message of conservation to local school children.

Your Role as a Conservation Volunteer in Ecuador

A typical week’s work as a volunteer may include:

As a volunteer you will be working alongside the National Park authorities and our Conservation Coordinator. They will be guiding you and training you in specific work and techniques used on the project. You will generally work from Monday to Friday and occasionally on Saturday mornings if there is work to be done.

You can read more detailed information about the aims of the project in our Ecuador Conservation Management Plan.

Working with Sea Lions in the Galapagos Islands 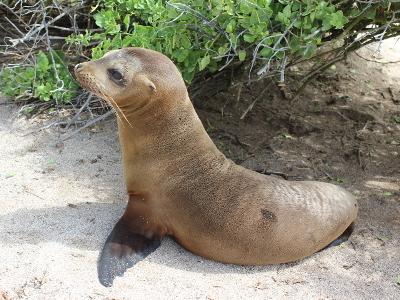 We also offer the opportunity to work with the National Park on a Sea Lion Monitoring Project. This program is separated into two parallel studies: one is a project that Projects Abroad has been running since 2013 and involves monitoring the populations of sea lions in and around Puerto Baquerizo. We collect data on population numbers, sex ratios, and breeding data from several different beaches as we study the long term dynamics of the resident populations.

The second project takes place under the supervision of the National Park staff. It involves collecting similar data to our own project but in more remote areas of the island and may include a rescue program to prevent and save the animals from getting stuck in the fishing nets.

This is a full-time option at the Conservation Project, and volunteers will work five days a week. No previous experience is needed, as you will receive the specialized training you need during your first week. If you are volunteering for less than a month in the Galapagos, you will not be able to join this project full-time, but you will be able to go at least once to learn what the project involves.

You will need to commit to a minimum of four weeks on the project if you would like to work with sea lions and you will also need to speak basic Spanish.

Living on the Galapagos Islands with Projects Abroad 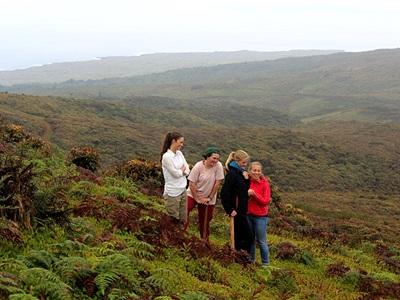 During your placement, you will live in shared volunteer housing. This will allow you to get to know the other volunteers on your project, and is an opportunity to make life long friends from around the world.

In your free time during the weekends and evenings there are numerous beautiful beaches where you can swim, surf, snorkel, or relax with a book. There are also wonderful opportunities to visit the other islands or take part in deep sea diving and snorkelling where it is possible to see (but not touch) sharks and sea turtles.

The Galapagos Island Conservation Project in Ecuador is available for less than a month if you don't have time to join us for a month or more. This project has been selected by our local colleagues as being suitable for shorter durations for both the host community and the volunteer. Although you will gain valuable cultural insight and work intensely within the local community please be aware that you may not be able to make the same impact as someone participating for a longer period.

If you are a high school student and first-time traveller you may want to consider our High School Special programs in Ecuador.