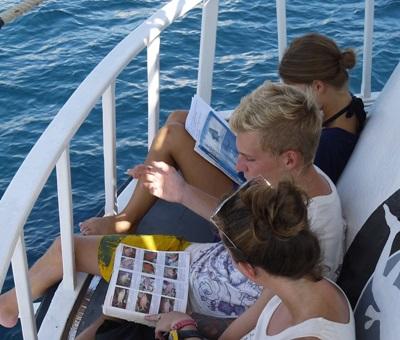 In March and April, our volunteer numbers increased with 31 new arrivals! We have excellent new volunteers who are willing to learn and help protect the environment. We were also pleased to welcome the 13 volunteers who were part of the Global Gap programme, who volunteer in five of our destinations with the Marine Conservation Project Thailand being their final project.

We have worked hard these past few months to provide Thailand and their communities with a better and healthier environment.

But it was not all work! In April, Thailand celebrates Songkran, a big national holiday and festival during which the whole country parties and takes part in a huge water fight. We had a great celebration day with all the volunteers and a big water fight in Ao Nang City.

All surveys and activities are being carried out regularly and volunteers are happy to be involved in events that really make a difference.

The endangered species surveys continue to be carried out consistently. An additional 57 entries have been logged on our internal database and the Shark Guardian website.

The fish population survey is being conducted steadily almost every diving day. Volunteers applied themselves and worked hard to pass their fish identification exam on their first or second try, in most cases. This allowed the project to have one or two survey teams available during most days to conduct the surveys.

The underwater training booklets have been printed and are available for every volunteer. These booklets are provided to the volunteers as a learning aid during both the fish ID training and the surveys themselves, to clear any possible momentary doubt.

Eight volunteers have successfully completed the training and proceeded to gather data. A total of 42 data logs have been submitted, almost doubling the size of our database.

Trash collection on diving days continues as normal. No exceptional amount of trash has been collected on any of the normal dive sites, yielding a total of 78.5kg extracted during these past two months (1.6kg average).

On the weekend of the 25-26th May, Projects Abroad participated in the “6th Cleaning the Fish Homes” event, organised by the Thai Government. This consisted of joining a number of other divers (mostly government employees) to remove trash from tourist hotspots in the Phi Phi National Park Area, mostly on Koh Phi Phi Don (Monkey Bay) and Koh Phi Phi Leh (Viking Cave). The event was a huge success and our team of 23 divers managed to extract a total of about 330kg of trash.

In March, five new volunteers joined the Marine Conservation Project Thailand and in April, 14 volunteers joined our project. On top of that, 13 volunteers who are part of the Global Gap programme arrived to take part in their final project, making a total of 27 volunteers.

We also introduced a new diving schedule to the project in April in order to better prepare the volunteers for when they start the fish surveys.

Mangrove conservation continues to be one of our main priorities on the project. Projects Abroad continues working with the local NGO, Mangrove Action Project (MAP), which allows the volunteers to help restore old shrimp farms back into mangrove forests.

On 13th March 2015, Project Abroad volunteers helped with restoration work. The main objective of the day was to do some hydrological improvement on EPIC Site #1, clear the litter from EPIC Site #2 and install the monitoring plots at the sites, which will be used over the next few years to monitor the progress of the restorations.

The group was split into two, with one half working on the hydrological improvement at Site 1 and the other half working on litter pick-up. MAP decided to reward the volunteers by taking them on a boat trip through the mangrove channels of Koh Klang, so that they could appreciate what a healthy mangrove ecosystem looks like.

On April 10th, 14 volunteers from Projects Abroad arrived at EPIC Site #1 on Koh Klang to help local villagers with the digging of several new small canals to improve hydrology.

The overall aim of this day was to to dig new canals in order to improve the hydrology at EPIC Site #1, allowing more water to spread across the site at high tide and enabling water to easily leave the site at low tide. A group of volunteers cleared a stretch of beach where there is the potential for a new beach forest planting to take place, to help reestablish the bio-shield from tropical storms. 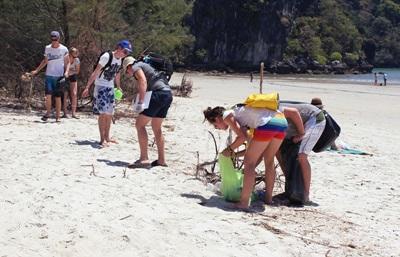 On March 27th, volunteers have collected over 166kg of trash on the beach of Nopparatara island. 85% of this trash comes from tour operators returning from their daytrip and leaving their trash on the beach near the low tideline. By the end of the day, this trash gets washed up in the ocean.

On April 17th, 255kg of trash was collected at Longbeach. This was the first ever beach clean on this location. All the trash was picnic-related and found in the vegetation area.

During the last couple of months, conservation volunteers have started having Thai Classes as an activity. We teach our volunteers basic Thai words, sentences and how to ask questions. This will help with our activities when we work with the local community and will also be useful for volunteers on a daily basis. 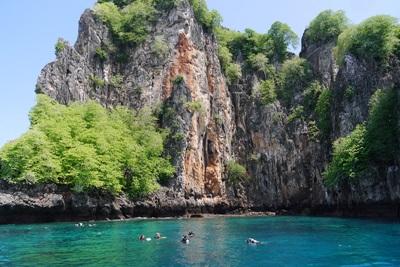 During the summer school break in Thailand, many of the children attend a summer camp where they can take part in different activities. Our conservation volunteers, together with a community project and the local community, held an activity for the children.

The theme of the activity was trash and recycling. Together with the volunteers, we taught the children how important recycling is and how it would help their community. First with a video presentation and afterwards, in order for the children to better understand the key concepts, we played a game with them. First, we split the class into small groups and afterwards, the children were given pictures of different trash and they needed to figure out which trash should go where. Working like this allowed the children to understand how important recycling is and also how to work together as a team.

One important issue regarding trash and pollution that people are not aware of is cigarettes. When cigarette butts become litter, they have a negative impact on the environment. The filters are made of a plastic that can take up to ten years to decompose. When a cigarette comes in contact with water, it can pollute up to 70 litres of drinking water, as it gets wet and releases the nicotine and tar that it contains.

Volunteers helped to clean up cigarettes along Ao Nang beach, the main beach in town. They collected 12,925 cigarette butts in 2.5 hours. This was only about half the beach and it was only what was lying on top of the sand.

In order to create awareness of the problem, the volunteers also hung up signs to tell tourists where they should put their trash.

We continue our commitment with the local community by working on the Wat Klong Son temple, a temple in a local area that doesn’t have much support compared to other temples around. There are only a few monks living there and most of the building is still under construction. Together with the volunteers, we helped to paint this temple. In the following weeks, we will return to Klong Son temple to continue our painting job until is completed.

This isn’t just to help the local community; this is also the way the volunteers learn about Thai culture, especially how to behave and act to the Buddhist monks. For example, Buddhist monks are forbidden to touch or be touched by a woman, or to accept anything from the hand of a woman. 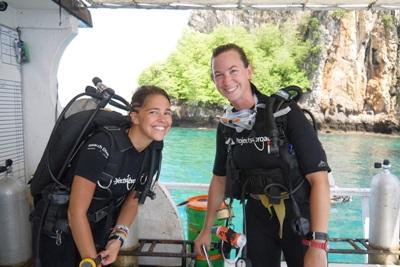 In March and April, we had a fantastic opportunity to learn about sea turtles as the volunteers had the opportunity to visit Phuket Marine Biological Center (PBMC) and learn more about the problems that the sea turtles face. Together with the PBMC, the volunteers helped with cleaning turtle tanks, applied medicine on juvenile turtles, as well as observed tube-feeding for a non-eating rehabilitating turtle. They also helped to release a turtle into the wild!

The next stop was the Phuket Aquarium, where volunteers had a closer look at the fish morphology that they have been learning about during their survey workshops. They completed a scavenger hunt that included answering questions about specific fish found there and drawing fish anatomy and markings as they see them swimming through the exhibitions.

Songkran 2015 festival took place on April 13th through the 15th, and it commemorates the country’s traditional New Year. The Songkran Festival is also known as the Thailand Water Festival, originally celebrated as a way for the Thai people to sprinkle water on their family members and elders for good fortune and to pay their respects to images of the beloved Buddha. Nowadays, the festival has transitioned into three days of water play fun, splashing locals and visitors alike with buckets of water, water hoses and super soakers as they gather in the streets.

The day started with a presentation in our resort where the volunteers could learn more about Thai traditions and the origin of Songkrang day. Afterwards, together with the care project volunteers, the volunteers went to visit one of the main temples and attended a ceremony. Once they received the monk’s blessing, all the volunteers went to pour water on the Buddha’s statue to ask for good fortune.

We finished the activity with a nice meal together at the resort before going to Ao Nang, where everybody joined in with the big water fight.