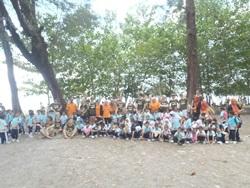 Despite being a shorter month, February was still an action packed month. Volunteers took part in their usual diving and land based activities.

There has been a slight increase in rain during the month but nothing too severe. We actually did welcome some of this rain as it was pretty hot at certain times of the month. It will only be hotter as we get into March and April.

During this rather hot month our outreach to the Emerald Pool was extremely fitting. 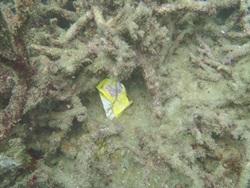 A total of eleven reef check surveys were conducted by our volunteers during the month of February. The species spotted the most by our divers was again the long spine black sea urchin. Over 2000 sea urchins were spotted. 2000 sea urchins were spotted at anemone reef. The coral species that were recorded the most was the magnificent sea anemone and also the plate coral. Almost 300 plate coral were recorded.

During our reef check surveys we also encountered some of the more exciting species; there were two leopard sharks one which was a baby. Two hawksbill sea turtles were also spotted in February. Also a blue barred parrot fish and a lobster were spotted.

For the month of February our volunteers cleaned up debris of the area of over 52,000 meter squared. This resulted in just under 50kg of loose debris, nothing on the larger scale was salvaged. Like the previous month, most of the debris were fishing lines as well as fishing nets; also lots of ropes were found. The second most collected, again same as the month of January, were cans and glass bottles. On Koh Mae Urai while salvaging a fishing net, a Boxfish, a Snapper, a Kuhls Stingray, 7 Softshell Crab, and 2 Peacock Flounders were released.

Nothing interesting that is worth mentioning regarding the salvaged debris, however the volunteers did a see a strange giant worm (sea cucumber). 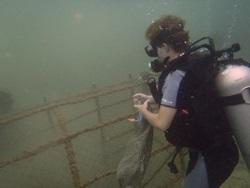 Volunteers spotted 2 hawksbill sea turtles during the month of February.

For the month of February our volunteers had three visits working days where we worked with FORRU and APE in our reforestation program.

On one of our visits, we went back in to the forest where the volunteers and FORRU staff build what we call nature reservoirs. This was a re-visit of the location to extend the reservoir project a little further down the stream. These pools will hopefully attract wild birds and other wildlife.

As per usual, every month we go to the FORRU tree nursery at least once. The FORRU team supervised the volunteers in the general care of the tree nursery. Volunteers harvested bamboo and made more frames for the tree nursery. They also began some germination process with some of native plant species.

On the last working day with APE and FORRU, volunteers were specifically invited to a beach near Koh Lanta where they took part in a beach clean-up of some of the local authorities. The beach was extremely dirty, mainly with rubbish floating ashore from Phi Phi and Koh Lanta. The volunteers braved the rain and cleaned up a huge section of the beach but plenty more rubbish was still around the area. No data was collected as this was not one of our usual beach clean-ups. 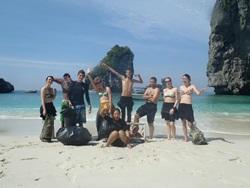 The most item found on Khlong Muang beach, was plastic bags and food wrappers. Large sums of bottles were also collected here.

As for Nopharathara, the most item picked up were cigarette filters and the second runner up were bottle lids and bottle caps

On Ao Nam Mao beach volunteers found that the most item they picked up were again plastic bags, they also managed to find a snorkel and a chair. The Ao Nam Mao beach is extremely polluted especially near the pier area. 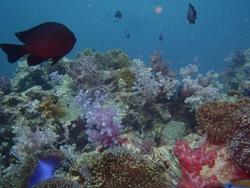 In February we visited the Turtle Rehabilitation Center in PMBC. Over there our volunteers were split into two groups, some were introduced to some tanks that needed to be cleaned. While some went and worked in the larger tank where the Olive Ridley turtles lived. Volunteers helped scrubbed the tanks and also the turtle shells.

After the work in the area Linnea took them through to the Aquarium where they had the opportunity to view the display with our expert Linnea answering any questions they might have had.

The last stop on this day before returning home was a visit at the decompression chamber. The volunteers were taken on a tour and shown around the area and explained about the problems of unsafe diving. Kevin who is the manager there was extremely insightful and gave a great presentation. 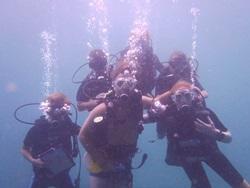 After the day’s work they all jumped in to the pool where they were able to cool off and have 20 minutes for them to relax. All in all it was successful outreach, the volunteers had a great day out and the staff there really appreciated the worked they did.

After the outreach in February all volunteers were invited to Dawn of Happiness where we had snacks out for them, this gave the staff the opportunity to thank the volunteers for their work. We also organised a cake for the monthly birthday for some of the volunteers.