It’s the last month of what has been a great year for us here in Thailand, our conservation project is going as strong as ever. Our diving based projects were successful this month with seven reef check surveys and we cleaned up a large area picking up plenty of rubbish.

Our volunteers as usual worked really hard with the FORRU team for our reforestation projects, including building nature trails, helping out around the tree nursery and also a New Year’s party for children in the nature club.

The conservation volunteers also had a great time visiting the turtles, organized a big beach clean-up with the local authorities as well as a Christmas party for 700 school children.

A total of seven reef check surveys were conducted by our volunteers in December. The species spotted the most by our divers was again the blue green chromis. We spotted over double of the previous month, a total of 1265 with one less reef check survey dive. Out of that more than 900 were from just one of the dive days. The other species that made plenty of appearances was the Moorish idol; our divers spotted over 70 of them. There was also a high number of corals spotted, this was mainly the flower brain coral.

During our reef check surveys we also encountered some of the more exciting species, there was a hawksbill turtle, emperor angel fishes and plenty of sea urchins that were stacked on top of each other. There were also some seahorses that our divers found very interesting and an empty lobster shell. 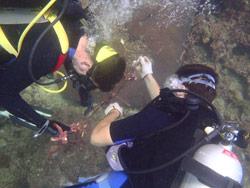 For the month of December our volunteers cleaned up debris from an area of over 20,000 meter squared. This resulted in over 60kg of loose debris, not including some of the bigger debris. Most of the debris, as usual, was fishing lines and fishing nets. The second most popular item found were bottles.

Fortunately there were no animals trapped in any of the debris that was salvaged. Some of the more interesting items found while salvage diving were a flashlight, paddles and even a calculator. Also a large net suspended under the surface and some metal scarps.

Unfortunately the only endangered species that was sighted by our volunteers was the one hawksbill turtle; this was around Philey wall area. 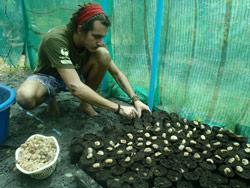 On another occasion for two weeks in a row our volunteers were taken into the jungle to help carve out a nature trail, these trails are for tourists and local people to walk through and appreciate the nature around the area. It was a hard work but rewarding.

As for the final work day with FORRU, we were invited to a party and games with the kid’s nature club. We set up different games for the kids and exchanged gifts. 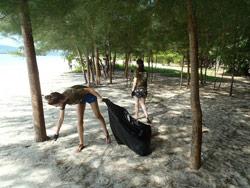 During the month of December our volunteers took part in two beach clean-up sessions. We did a big beach clean-up with the local police and other organizations that fell on a Saturday. Our volunteers were invited for this special day and together after the opening ceremony cleaned Ao Nang beach and picked up over 200kg of rubbish.

As this was a big cleaning day with we just weighed the rubbish. The local authorities were extremely happy to have us there and our presence in the community is appreciated.

The other clean-up we did was at Nopharathara beach, this was a Projects Abroad independent clean-up. During this short session a total of 36kg of rubbish was picked up. What we found the most of as per usual were plastic sheets, plastic bags and plastic food wrappers. We also found a lot of straws and cigarette butts too. 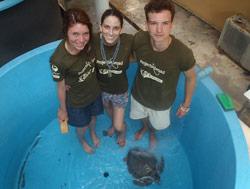 In December we visited the Turtle Rehabilitation Center in Phuket for a day as usual. Our volunteers worked on some tanks that needed to be cleaned. This is great for our volunteers as it isn’t very often they get the opportunity to get “hands on” with sea turtles.

Volunteers helped scrub the tanks and then were shown around the area where some of the local staff were doing their research. Our volunteers were also lucky enough to see some very young sea turtles and that always puts a smile on their faces.

After the work in the area Linnea took them through to the Aquarium where they had the opportunity to view the aquarium displays with our expert biologist Linnea answering any questions they might have had.

The last stop on this day before returning home was a visit to the decompression chamber. The volunteers were taken on a tour and shown around the area and local staff explained about the problems of unsafe diving. This was a success and we will be doing this again.

For December’s Community outreach, Projects Abroad was invited to a school around the Khlong Thom area. This was to celebrate Christmas with 700 children.

We started the day with a little introduction to Christmas followed by setting up different stations allowing the children to take part in a variety of activities. This ranged from origami, painting, making Christmas cards and the most popular, the puppet show. 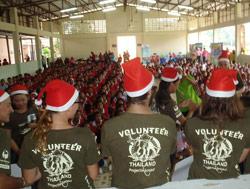 During December we had a Christmas party with our volunteers. We had a big spread of lovely food cooked by the staff at Dawn of Happiness and followed with an exchanging of presents. All the volunteers and the staff had a great time together.